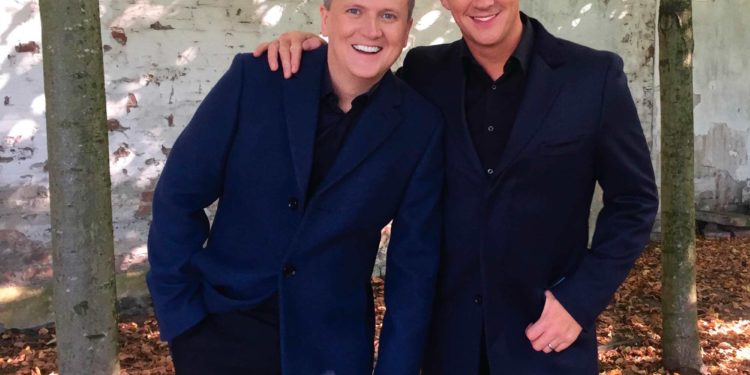 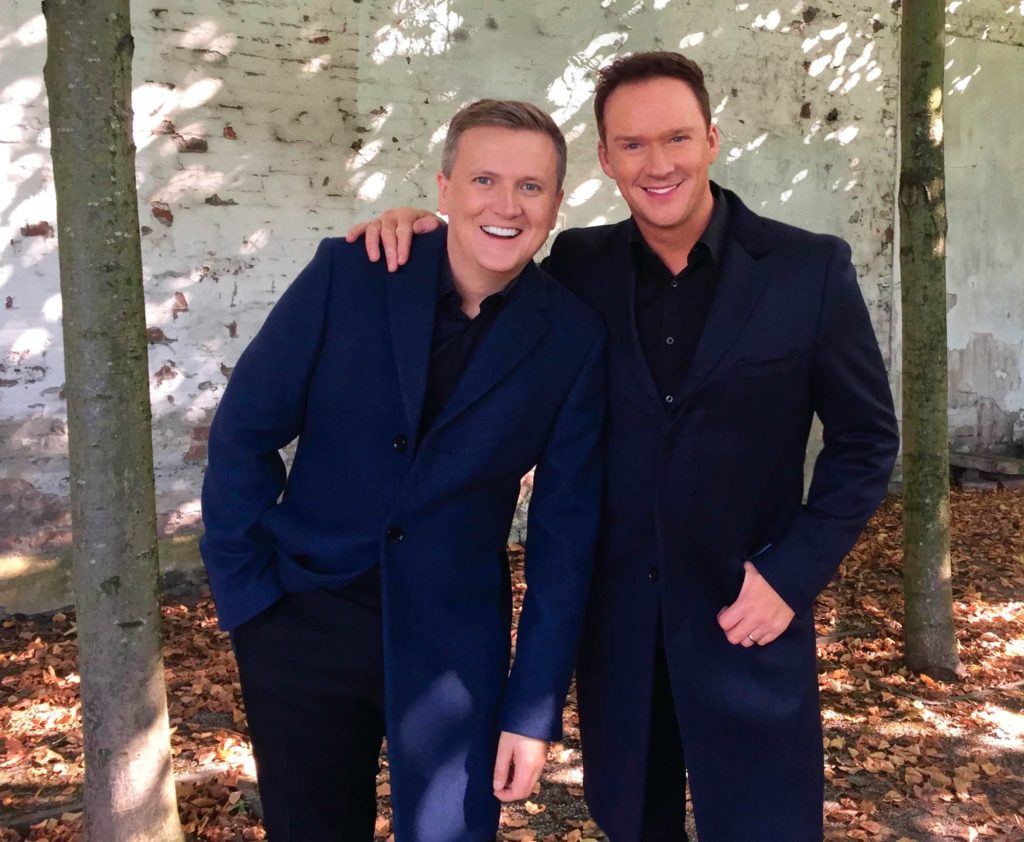 Take two of the world’s greatest classical voices, get them to sing a selection of their favourite hymns, arias and popular songs, and what do you have? One of the fastest-selling albums nowadays of any genre.

Aled Jones and Russell Watson are continuing their partnership with their first tour together, stopping off in Nottingham where they will perform numbers from their debut offering In Harmony.

And after speaking to the pair of them I reckon they could carve out a new career for themselves: on the stand-up comedy circuit.

Aled was in London where he had just presented the breakfast show on the radio station Classic FM while Russell was in Cheshire. Despite being more than 150 miles apart, they continually made each other – and me – laugh. So much so that at one point no one could speak because they were guffawing so much.

I ought to have known what to expect when I joined a conference call which linked the three of us. When prompted to state his name, a voice called out “the one who’s not Russell Watson!”

“You can walk into a room, meet somebody for the first time and immediately you know whether you can have a laugh with them and whether you’re going to get on with them.”

The conversation soon had a light-hearted edge. When I asked Aled and Russell, who first sang together on the Songs of Praise show The Big Sing nine years ago, why it had taken them so long to collaborate again, Aled chimed up: “It took us that long to get over how bad it was the first time!”

Russell shot back: “I haven’t slept since.”

For a brief moment they became serious. “To be honest with you,” said Aled, “we both lead busy lives and the time I suppose wasn’t right. For the first album the time was right. It Took a couple of calls, a couple of texts and the next thing we know we’re doing the album.”

Russell said the pair had known each other for almost 20 years and had met at a charity event at the Royal Albert Hall. Since then they had become “good pals”.

“You can walk into a room, meet somebody for the first time and immediately you know whether you can have a laugh with them and whether you’re going to get on with them. Aled makes me laugh, I enjoy his company and we get on really well.” 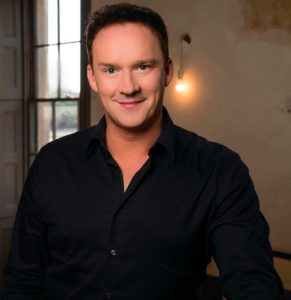 Russell says he can’t wait to go on tour because they will have fun as well as doing something they both enjoy: singing.

Aled agrees. “The thing that’s come out of it which is brilliant is that our voices really blend together. There was no guarantee at all that that would happen.”

When I ask who chose the tracks that would go on the album, they were back to their mischievous selves.

“We had a massive fight, I won and I got what I wanted,” says Russell.

In reality they quickly agreed on the tracks. They also concurred on what the touring show should be.

“The tour is very much a reflection of the album,” says Aled. “We’re both used to being on stage on our own but this is the first time properly that we’re doing a tour with somebody else. We’ve sung with other people in one-off concerts but for this tour we’ll be singing duets for all of it.”

One of the problems facing any entertainer is “corpsing” – laughing uncontrollably. My fear is that this will happen to the pair of them while they’re on stage.

Aled is concerned too – but in Aled’s individual way. “We were having a chat about this the other day. We’re the biggest corpsers in the world. Sometimes Russell has this glint in his eye which sets me off – which is very unprofessional of him.”

“We’ve had a couple of moments,” says Russell, “where we’ve been doing certain things that are meant to be very serious and then I’ll give Aled a little look, raise an eyebrow and he’ll start laughing. As soon as he starts laughing I start laughing and that’s it, game over.”

But once the tour actually starts, Russell hopes sanity will be restored: “Once we get on stage and there’s an audience, the dynamic changes. You’ve got the adrenalin from being in a big venue and everything else. 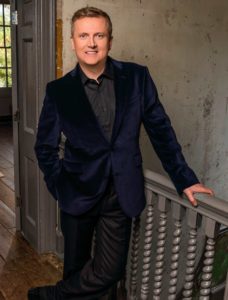 “Initially I hope I don’t forget the words, remember where to walk on stage, where to come off, say the right things between the songs. There’s all these different things going on in your head.”

Aled interjects that he’s hoping to remember the dance routines as well.

“Yes, the dance routines are huge,” maintains Russell. “There’s this moment when I do a triple back flip into a full pirouette and then I end up in the splits. I’ve practised that a lot but I’m struggling with the splits.”

People have been paying to see Aled and Russell for a number of years and both are successes in their own right.

Aled Jones MBE was born on 29 December 1970 in Llandegfan, Anglesey. He became famous for the cover version of Walking In The Air, the song from Channel 4’s animated film The Snowman, based on the book by Raymond Briggs.

By the time his voice broke when he was 16 he’d recorded 16 albums, sold more than six million records and sung for Pope John Paul II, the Queen and the Princess of Wales.

He married Claire in 2001 and they have two children, one of whom is an actress.

Russell Watson was born on 24 November 1966 in Irlam, Lancashire. While he was spending the first eight years of his working life in a factory making nuts and bolts he never imagined he would later be described as one of the world’s greatest classical singers.

He suffered serious health problems just over ten years ago when he twice had a brain tumour which threatened his life as well as his singing career. But he recovered and his illness made him appreciate his two daughters all the more. He is now married to his second wife, Louise.

After the In Harmony tour you would expect the pair of them to work together again although Russell isn’t so sure: “I’ll never work with him again. The whole onstage persona, TV, backstage – it’s all just an act.” 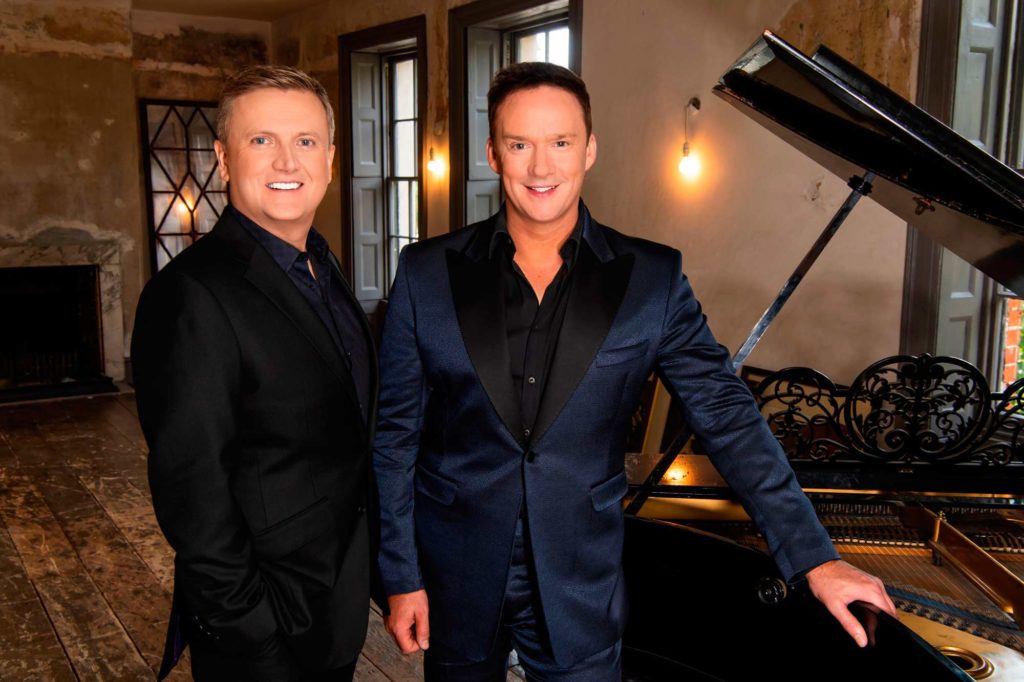 After another spell of chuckling he sets the record straight: “I’d definitely work with Al again. It’s been a great experience. There’s no question that I’d want to repeat that.

Their record company is pressing for a follow-up because In Harmony has almost reached gold status.

“If I’m being absolutely honest,” says Russell, “I genuinely thought I would never have another gold record again. This has been incredible. It’s very rare that artists are handed gold discs any more because the industry’s changed so much and people don’t buy CDs. It won’t be long before they’re obsolete. To gain a gold record on sales is quite a feat and we’re really proud of that.”

Next year will be Russell’s 20th anniversary as a recording artist and it will be 30 years since he first walked on stage professionally. While he’s celebrating those landmarks Aled will be touring Australia as well as continuing his presentation work.

Another album and tour may be on the horizon. And I wouldn’t put it past them to stage a few comedy gigs as well. My chuckle muscles have only just recovered . . .