Andy Street: the Derbyshire musician who appeared on the world’s biggest television show 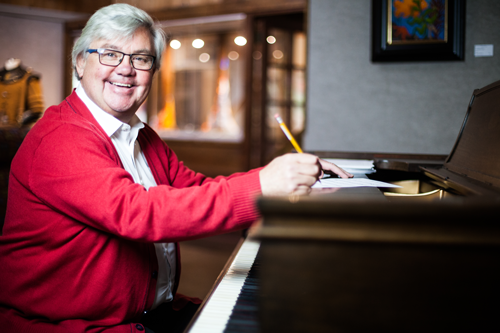 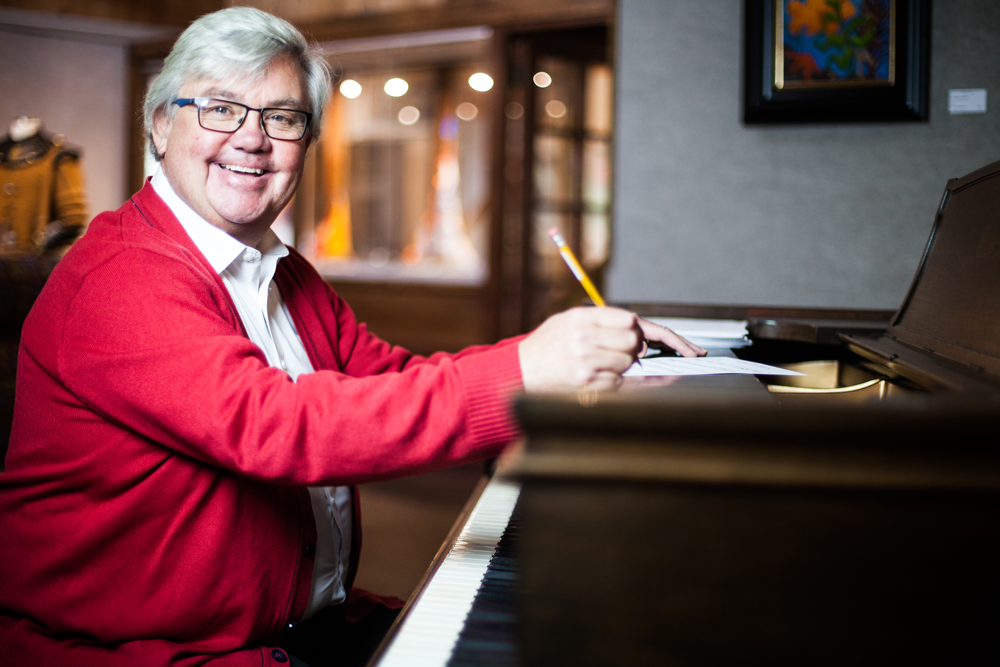 Sitting down for an evening of undemanding television, my wife and I tuned in to a reality series that caught our eye: Last Laugh In Las Vegas. Nine showbiz legends from the 1960s, ‘70s and ’80s were given a final shot at putting on their dream show in the variety capital of the world.

During the episode we looked at, a flamboyant producer introduced the stars to their musical director for the show. I almost fell off the sofa when I saw it was Andy Street from Newhall in south Derbyshire!

I met Andy many years ago in a recording studio when he was arranging a local musician’s songs and playing keyboards on them. Little did I know that later he would win an Emmy and work on the world’s biggest television show American Idol – when it was watched by 30 million people.

I spent a couple of hours talking to Andy, who lives in Los Angeles, about his career which has led to his working with some of the greatest names in showbusiness. Despite that there’s nothing pretentious about Andy: he comes over as unassuming, modest and endearing. You can still hear south Derbyshire in his accent – there’s no hint of a Hollywood twang!

He could be forgiven for talking up his successes: during his twenties he was the musical director for many British television shows while programmes featuring Andy’s music are shown in more than 100 countries.

“I had nothing else to do but practise. I guess I got my fundamentals when I was pretty young.”

He realised 26 years ago when his composing talents were beginning to get noticed in the United States that he needed to base himself on the other side of the Atlantic. It was a wise decision.

But life in LA hasn’t been without tragedy: 13 years ago he lost his young son in a skateboarding accident.

Andy who’s 62 developed a passion for music at an early age: “My mum and dad used to take me to Belfields toy shop in Swadlincote. I used to plonk on a piano and asked if I could have lessons.”

Andy and his family lived on Pear Tree Avenue, Newhall while his aunt had a house and a piano in nearby Wood Lane.

“I used to walk round there every night and practise the piano. I had nothing else to do but practise. There was nothing to divert my attention. I guess I got my fundamentals when I was pretty young.” 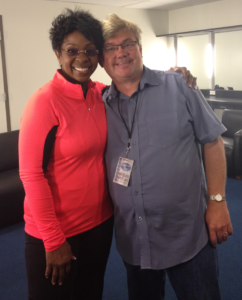 Andy played in pubs and working men’s clubs from the age of 11. Then he joined a big band run by Jim Baxter which practised at Gresley Old Hall.

Andy admits he learned a lot from playing with older musicians, some of them professional, in all sorts of groups. He remembers with affection playing at the Saxon Arms in Derby, with some of the shows being broadcast by BBC Radio Derby and compered by Arthur Coyne.

Choosing Emmanuel College, Cambridge over the Royal Academy was a good move for Andy. “It was very academic, very formal, but I had a fantastic time. I wouldn’t have changed it for the world.”

On his return to Newhall he got a job at Bretby Crematorium playing the organ for funeral services. Then the phone rang: Martin Hair from a music shop in Swadlincote told him a club in Derby needed a keyboard player who could read music. It was Berties, formerly the Talk of the Midlands.

The bandleader liked Andy and gave him a permanent job. “Christmas came and we were really busy, working seven nights a week. Unfortunately it was the beginning of the end of that era of chicken in a basket and the clubs. After Christmas things started to slow off and they cut down from seven nights to three.”

Andy’s talents didn’t go unrecognised for long. Warner Holidays offered him a six-month residency in Ibiza, then he spent 18 months as bandleader at a cabaret club in Newmarket. But it was obvious that clubs were dying out.

“I got my head together and thought the only thing to do is to go to London. I called an agency called Geraldo. Geraldo was a famous band leader. When he died his wife ran an agency that supplied all the big hotels with piano players.

“I called Mrs Geraldo and said ‘I’m really good, can I play for you? I need some work.’ She said ‘why don’t you come round in an hour and show me what you can do?’ I played for her and she said ‘you’re on at four o’clock this afternoon’.”

The venue was a swish hotel on Sloane Street known then as Carlton Towers. “I used to start at five o’clock and play until one o’clock in the morning. I think I earned about 30 quid!”

“The choreographer was Nigel Lythgoe. He’s gone on to become one of the richest men in showbiz and one of the most powerful guys in America.”

After a gig at Carlton Towers Andy often became a session musician at the studios of pop moguls Stock, Aitken and Waterman, regularly playing reggae music for bands who took advantage of the cheaper overnight studio rates.

At a party one night Andy met Mike Smith – not the DJ but the husband of Sally James, star of the ITV series Tiswas. Smith introduced Andy to comedian Bobby Davro who had just signed a deal with the television company TVS for six series.

“Mike managed to get me involved and I was musical associate on the TV show. It was great training for me,” says Andy who later became the show’s musical director.

“The choreographer was Nigel Lythgoe. We became friends. I can remember sitting in a dance studio playing the piano over and over again. Nigel turned to me and said ‘we deserve better than this’. He’s gone on to become one of the richest men in showbiz and one of the most powerful guys in America.”

Andy worked on television shows with Bob Monkhouse, Brian Conley and Hale and Pace, but he was getting tired of doing other people’s music. At heart he was a composer. And when he was given the chance to write a song for an American children’s television series called Madeline, he jumped at the chance. 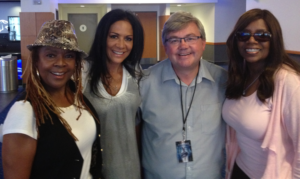 Andy with Thelma Houston, Sheila E and Gloria Gaynor during a tribute to the late Donna Summer

“They wanted me to write for 20 episodes. I did the first show from London and then I decided to come to LA. It became a very big show – it still is. I did 60-odd episodes and three movies. The show won an Emmy in 2003.”

Andy and his wife Anne had just had their first child, Jordan who is now 22 and studying to be a doctor. They moved to LA where they have been ever since.

Andy wrote music for other children’s shows including Sesame Street, Strawberry Shortcake and Angelina Ballerina but he went through a lean time 13 years ago. His son James came off his skateboard going down a hill near his home, banged his head on the road and died. He was only 13.

Naturally enough Andy didn’t feel like chasing work. Then Nigel Lythgoe called him and offered him a job on American Idol.

“I was the mentor on the show and did the musical arrangements. It was hard work. You had to turn up at four o’clock in the morning to play – it was a crazy, crazy show. But I had a lot of fun.” 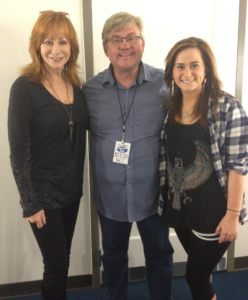 The coronavirus outbreak has brought more challenges for Andy who had half a dozen shows cancelled. He was due to be musical director for the premiere of the musical adaptation of To Sir, With Love, the 1967 film that deals with social and racial issues in an inner-city school.

He did appear on The Late Late Show With James Corden, playing the accordion, during lockdown although Andy has been concentrating on writing.

He has teamed up with Jonathan Kydd, son of late British actor Sam Kydd, to produce a musical about variety performer Dan Leno. It will shortly be produced as an online version.

Andy is also working with Roger Avery, who won an Oscar for writing the screenplay for the film Pulp Fiction, on a musical about the London Beer Flood.

“It’s based on a true story. In 1814 two rival breweries, Whitbread and Meux, were always trying to outdo each other. In those days they stored beer in huge barrels on the roof of their building. It was a particularly hot summer which played havoc with the wooden barrels and they burst.

“Hundreds of thousands of gallons of beer slopped onto the streets and eight people were killed.

“We’ve been talking about it for years but we’re finally writing the musical. It’s like Titanic meets Les Misérables. We’ve written four or five songs but it takes so much time.”

As if that were not enough to go on with, Andy is working with a choreographer on a ballet.

“I’ve never written a ballet, so this is a first for me. I can’t tell you a lot about it yet. I’ve come across a subject I want to do and the idea intrigues me.”

Andy’s work ethic and unparalleled talent mean further success is almost certain to come his way whatever he turns his hand to. Not bad for the lad from south Derbyshire who never toyed with the idea of learning to play the piano.

Peter Wight: from Duffield to the National ...