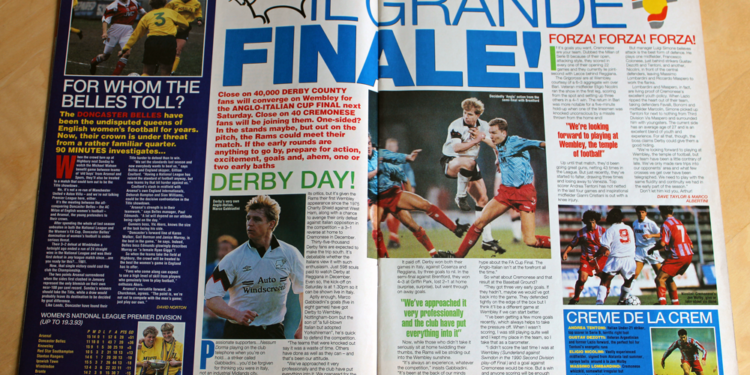 Passionate supporters . . . Nessun Dorma playing on the club telephone when you’re on hold . . . a striker called Gabbiadini . . . you’d be forgiven for thinking you were in Italy, not an industrial Midlands city. Derby County have gone Anglo-Italian Cup crazy!

The ‘Spaghetti Tournament’ has had its critics, but it’s given the Rams their first Wembley appearance since the 1975 Charity Shield against West Ham, along with a chance to avenge their only defeat against Italian opposition in the competition – a 3-1 reverse at home to Cremonese in December.

Thirty-five thousand Derby fans are expected to make the trip south. It’s debatable whether the Italians view it with such enthusiasm. Just 598 souls paid to watch Derby at Reggiana in December. Even so, the kick-off on Saturday is at 1.30pm so it can be shown live in Italy. 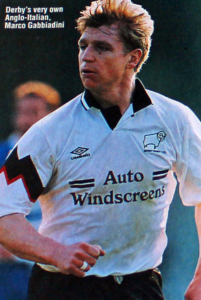 Aptly enough, Marco Gabbiadini’s goals (five in eight games) have got Derby to Wembley. Nottingham-born but the son of a “full-blown Italian but adopted Yorkshireman”, he’s quick to defend the competition.

“The teams that were knocked out say it was a waste of time. Others have done as well as they can – and that’s been our attitude.

“We’ve approached it very professionally and the club have put everything into it. We prepared for the foreign trips very well. We went away in plenty of time and we stayed in good places.”

It paid off. Derby won both their games in Italy, against Cosenza and Reggiana, by three goals to nil. In the semi-final against Brentford, they won 4-3 at Griffin Park, lost 2-1 at home (surprise, surprise), but went through on away goals.

“Now, while those who didn’t take it seriously sit at home twiddling their thumbs, the Rams will be striding out into the Wembley sunshine.

“It’s always an experience, whatever the competition,” insists Gabbiadini. “It’s been at the back of our minds since we reached the Final. We’ve had a chat about it but if it was the FA Cup, it’d be different. There’s a lot of media hype about the FA Cup Final. The Anglo-Italian isn’t at the forefront all the time.”

So what about Cremonese and that result at the Baseball Ground?

“They got three very early goals. If they hadn’t, maybe we would’ve got back into the game. They defended tightly on the edge of the box but I think it’ll be a different game at Wembley if we can start better.

“I’ve been getting a few more goals recently, which always helps to take the pressure off. When I wasn’t scoring, I was still playing quite well and I kept my place in the team, so I take that as a barometer.

“I didn’t score the last time I was at Wembley (Sunderland against Swindon in the 1990 Second Division play-off Final) and a goal against Cremonese would be nice. But a win and anyone scoring will be enough for me!”

Peter Wight: from Duffield to the National ...