Danny John-Jules: from Red Dwarf to The Da Vinci Code 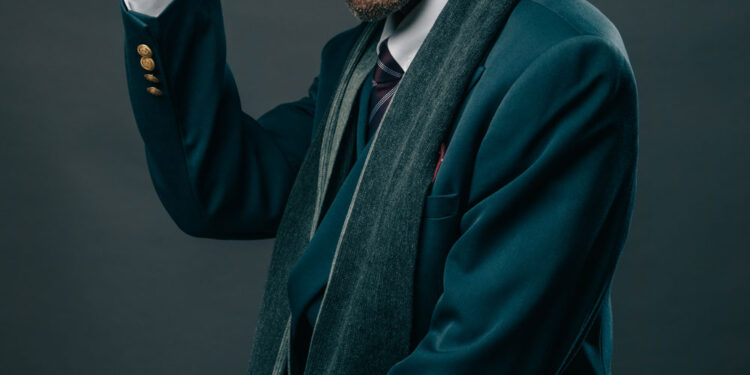 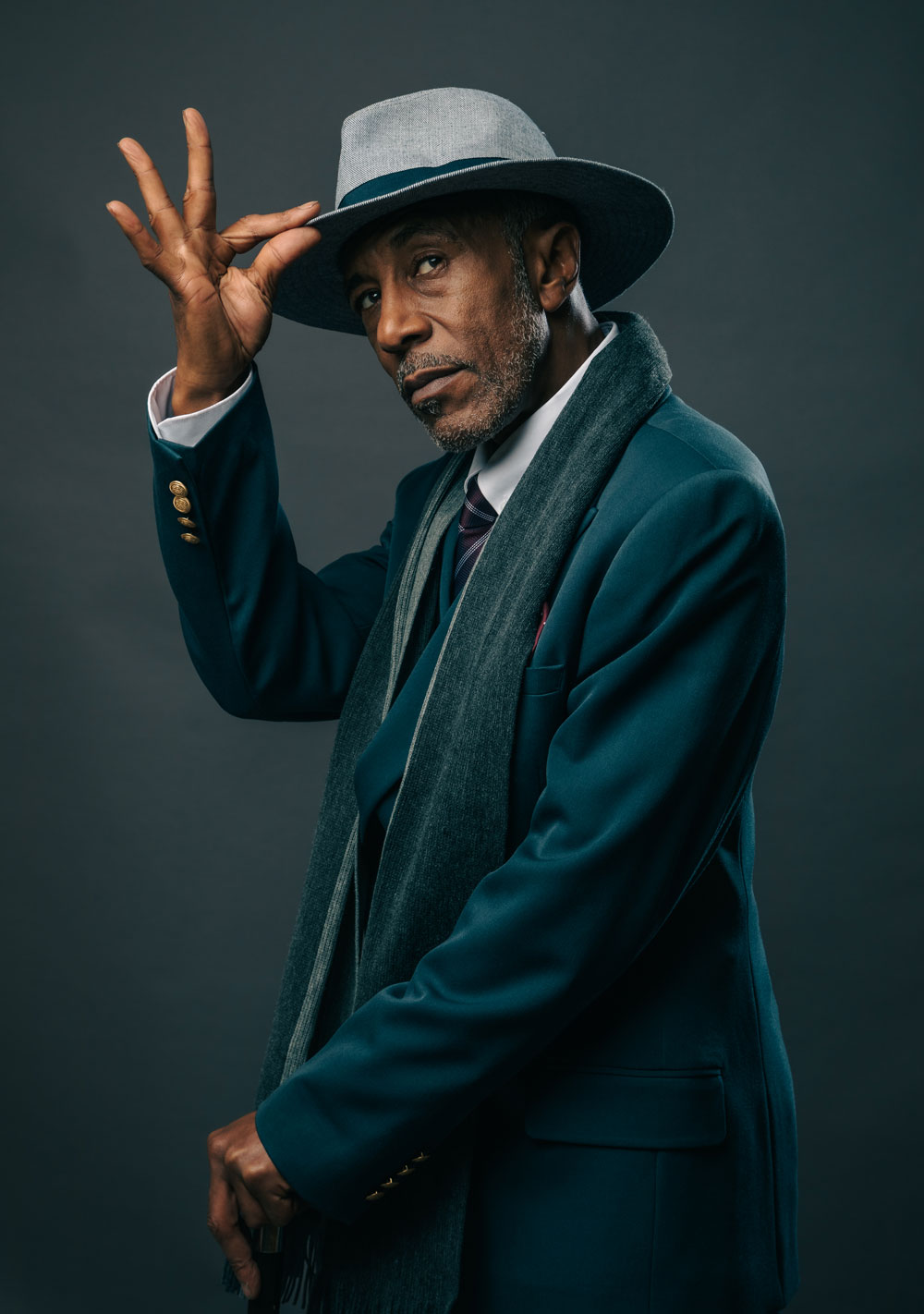 Danny John-Jules breaks off from trying to learn “a load of very educated and complicated lines” for his part in the stage version of Dan Brown’s The Da Vinci Code to express his delight at securing the role of Sir Leigh Teabing.

Some actors might baulk at taking on a role portrayed by one of our finest actors, Sir Ian McKellen, in the film version. But not Danny.

“I’m following in the footsteps of a lord of the theatre. I don’t need anything else in my life. If I never work again I’ll be more than content,” he says with great pride in his voice.

This is the man known to millions of television viewers as Cat in the sci-fi comedy series Red Dwarf; as Dwayne Myers, the motorcycling, liberty-taking policeman in the drama Death In Paradise; or from his eight-week stint in the 2018 series of Strictly Come Dancing.

“Although I’ve had a vast theatrical career, not many people know me for doing live theatre.”

So how did he get the part in The Da Vinci Code?

“I have no idea and I can’t be any more honest than that. In this climate everyone’s out there hustling for work. I just got a call to do it which flabbergasted me no end.

“I would understand it if it was a comedy show or a TV drama. Although I’ve had a vast theatrical career, not many people know me for doing live theatre. People know what they see on telly on a regular basis.”

He talks candidly about why he left Death In Paradise, whether there will be another series of Red Dwarf and his future work. But he has no time for so-called showbiz journalists who know nothing about show business. He returns to the subject often before giving me an exclusive which he would have revealed to other journalists if only they’d been bothered to ask.

What really annoyed him was when he went on Strictly and the first article he read described him as a Z-list celebrity. When I exclaim how unfair that was, he replies: “Showbusiness isn’t fair. 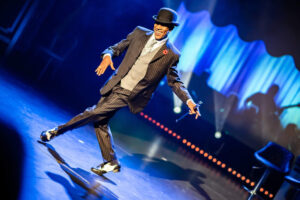 One thing that Strictly did was kick-started his love for theatre again. Within a year of being on Strictly Danny had written a one-man show, rehearsed it and got it on stage. The two-hour spectacular contained 21 numbers from Danny who still regards himself as a song and dance man.

But none of the journalists who had criticised Danny when he was on Strictly turned up to review his show.

Daniel John-Jules was born on 16th September 1960 in Paddington, London. His parents had travelled to the UK from Dominica on board the Empire Windrush.

Danny was brought up on an estate in Notting Hill. He went to a drama group in a church hall and was trained at the Omnibus Theatre Company and Anna Scher Children’s Theatre.

He was a dancer in variety shows behind star names including Jimmy Tarbuck, Dickie Henderson and Norman Wisdom.

He then featured in many West End productions, being an original cast member of Andrew Lloyd Webber’s Starlight Express, and danced in the group Wham’s video for their song The Edge of Heaven.

“For 33 years we’ve had the same question: are we getting any more Red Dwarf?”

He turned up half an hour late for his audition for Red Dwarf, unaware of his tardiness and did not appear concerned. Wearing his father’s old zoot suit, he won over the producers who decided he was cool enough for the part of Cat. Danny and Craig Charles are the only actors to have appeared in every episode of Red Dwarf.

There have been rumours recently about the cult sci-fi programme returning. Danny says it shouldn’t be ruled out.

“For 33 years we’ve had the same question: are we getting any more Red Dwarf? I’m just glad and over the moon that I was in a show that was like nothing else.”

Here’s the exclusive that Danny has for Country Images: it’s to do with the ITV show called The Real Full Monty, a programme that raises awareness of men’s cancers.

“When I did that show I was invited to the head of ITV’s yearly party at Kensington Palace. Why? The show just happened to be their top factual show of the year and the producers told me ‘you were by far the most popular character on the show’.

“If any journalist had the common decency to do a showbiz interview, they would have got that story.” 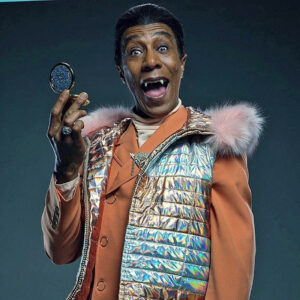 Now Danny is preparing for The Da Vinci Code which is being billed as “one of the most anticipated theatre shows of 2022”. Danny has no worries about following Sir Ian McKellen.

“It’s nothing like the film, so obviously I’ll be nothing like Sir Ian. With actors it’s interpretation, along with the director’s final say.”

Dan Brown’s book The Da Vinci Code has been denounced by many Christian denominations as an attack on the Catholic Church. It has also been criticised for its historical and scientific inaccuracies.

Danny, who was brought up as a Catholic, doesn’t enter the argument: “The good thing about The Da Vinci Code is that whether your character is for or against the popular beliefs, it doesn’t matter because we’re just playing characters.

“When you go into any job you’ve got to leave that at the door, whatever you believe, because otherwise there’d be something in every script that you wouldn’t agree with.

“We are smoke and mirrors – we’re just playing parts. Whether I believe what I’m saying or not, there’s only one thing that I’m going to believe 100% and that’s the character because if I didn’t believe in that character I can’t portray him.

“If I don’t have that problem I just act and make sense of the words on the paper. That’s my job – it’s not to start asking people if this is religiously correct.”

Danny says many years ago critics said his career was over. But after 40 years he is going strong. 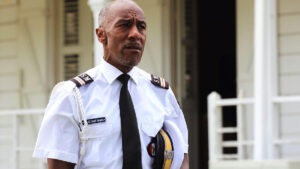 Danny John-Jules in Death In Paradise

You may have seen on television the Christmas special of Death In Paradise, with Danny making a return after four years. Some people must have thought he was mad leaving a show that was filmed in the Caribbean but he felt the character had gone as far as he could take it.

“Danny had outlasted four detectives and no one asked the detectives why they left!” He guffaws for several seconds before continuing.

“When you look at it like that, what was there for me to do except get a pay cheque? Is that art or is it just a nine-to-five job? Is it any different from doing any other role?”

Danny decided to return to the stage and get more “razzmatazz” in his life. He is touring in The Da Vinci Code until the end of April and has several other projects that are either in his diary or waiting to be aired.

He is appearing in a new BBC drama called Dodger, an Oliver Twist prequel which also stars Christopher Eccleston and David Threlfall; he has filmed an episode of the new series featuring oddball private detectives Shakespeare and Hathaway; and he has a number of sci-fi conventions to attend on the back of the popularity of Red Dwarf.

While most people were hampered by lockdown, Danny recorded 250 celebrity messages for CelebVM – a celebrity video messaging platform on which fans can pay for personalised videos.

Danny has been in shows which have picked up awards although his personal contribution is yet to be recognised. Maybe that will come with The Da Vinci Code. Then those journalists who he feels have written him off in the past will have to talk to him to find out what a fascinating character he really is.