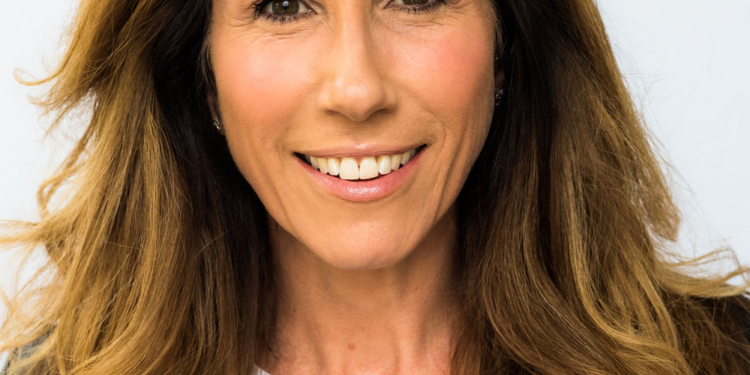 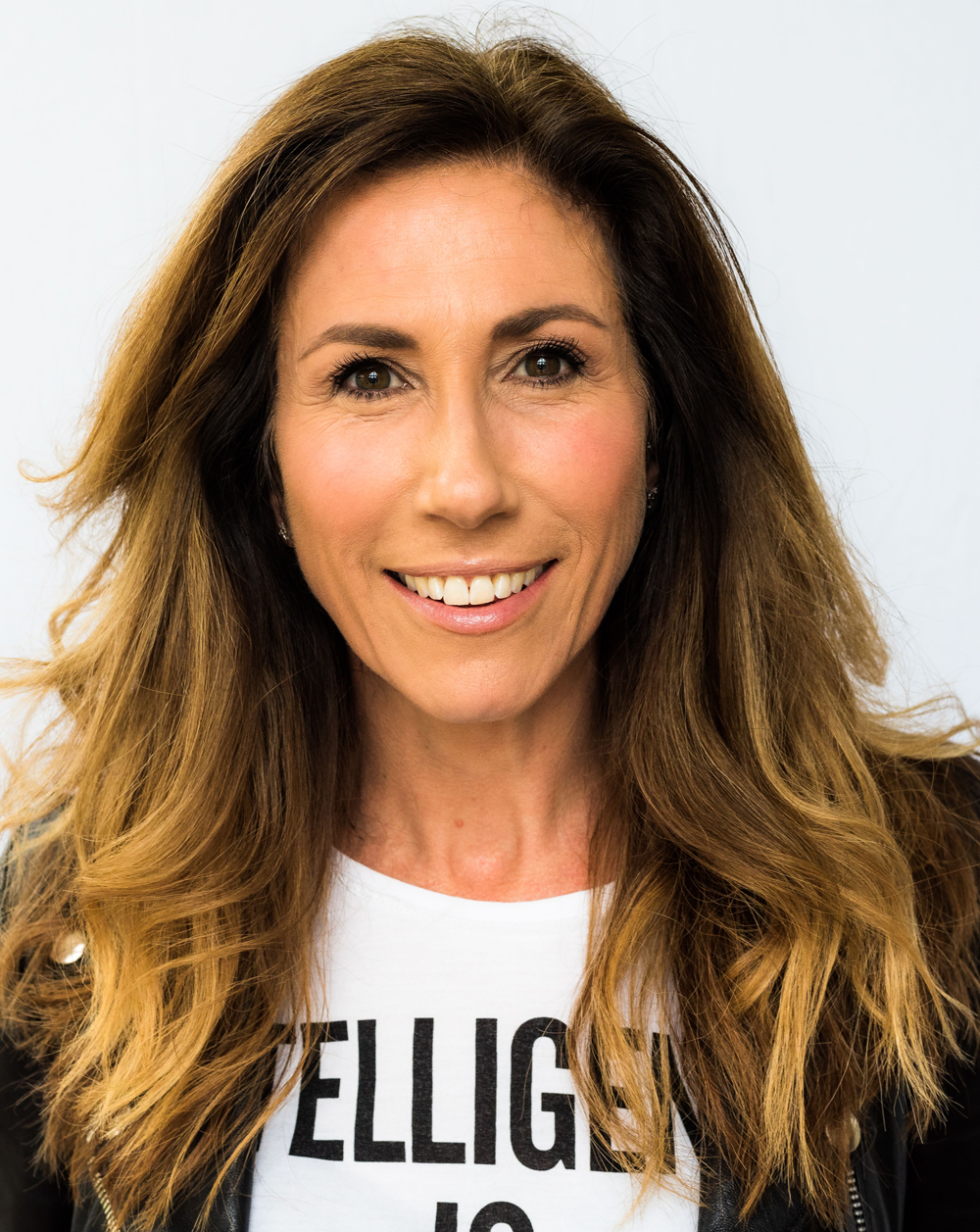 Two years after last appearing on the stage of Nottingham’s Theatre Royal, Gaynor Faye is coming back to the city which she says has a “special place in my heart”.

That’s because the 49-year-old actor who is recognisable for stints in two television soap operas began her professional career in the city in 1992. She played a secretary in John Godber’s play The Office Party at the Playhouse and says she is always drawn to Nottingham.

Now she is to appear in the stage adaptation of Peter James’s best-selling crime novel Looking Good Dead which is to stop off in the East Midlands.

During a break in rehearsals Gaynor revealed that working on her last television job didn’t have the usual sparkle. She also explained why she’s given up skating despite winning the first series of Dancing On Ice and what it’s like working alongside her mum – writer and director Kay Mellor.

In Looking Good Dead Gaynor is Kellie Bryce, the wife of Tom Bryce, played by Adam Woodyatt – Ian Beale from EastEnders – who will be taking to a stage for the first time in 39 years.

She tells me she’d worked with producer Josh Andrews on a previous show and he asked if she’d be interested in a part in Looking Good Dead.

“He sent me the script and I really enjoyed it. I’d seen a couple of the other ones (adaptations of James’s books) and I thought they were fantastic.

“I really wanted to work with Josh again and I wanted to get back into theatre. I’ve been really excited to get going and now we’re in it, it’s brilliant.”

Looking Good Dead features Tom Bryce inadvertently becoming a witness to a vicious murder. Reporting the crime to the police has disastrous consequences, placing him and his family in grave danger.

“I’ve never worked with Adam before,” says Gaynor. “He’s very funny. He’s down to earth and lovely to work with.

“What I’m really excited about is the fact that people have got a thirst for wanting to go to see live theatre. Peter James’s play is going to be just what people want. People can get lost in theatre for a while and forget about Covid.”

Gaynor Kay Mellor was born on 26 August 1971 to Kay and Anthony Mellor. She started performing her mother’s plays in their garden.

After her professional career started with a year-long tour of The Office Party, she was given the part of Judy Mallett in Coronation Street.

“Wow! I loved that character. She changed my life around, really. It was such a fantastic time to be in Coronation Street. It was like a golden era with Sarah Lancashire, Julie Goodyear, Betty Driver – all iconic soap queens. I was so lucky: I got loads of brilliant storylines.”

After returning to the stage in the original West End production of Calendar Girls – based on a true story of a group of middle-aged Yorkshire women who produced a nude calendar to raise money for charity – Gaynor did Corrie!, the play about Coronation Street. 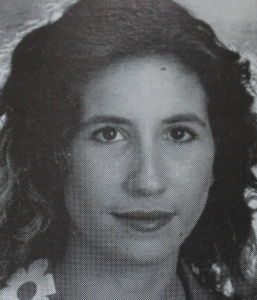 Gaynor in The Office Party at Nottingham Playhouse in 1992

Then she took part in the first series of Dancing On Ice, winning it with her partner Dan Whiston.

“I really concentrated on the skating. I learned how to skate forwards, backwards, the disciplines and the technical skills, but what the audience wanted to see was people being flung around and lifted above people’s heads.

“There were quite a few accidents but luckily I came off unscathed. Dan looked after me so well. He was such a great partner and we’re still really good mates now.”

Lunch with Stuart Blackburn, producer of Emmerdale, led to Gaynor playing Megan Macey in that soap for seven years. It came at the perfect time for her: she has a boy and a girl with her long-term partner Mark Pickering, so she was able to spend plenty of time with them because Emmerdale is shot near her home in Leeds.

“Emmerdale was fantastic too. Absolutely wonderful. Again I was lucky with some good storylines.”

Then came a dilemma for Gaynor: she wanted to return to the stage to be in the world premiere of Band of Gold, the TV show written by her mum which revolves around the lives of a group of sex workers who live in Bradford’s red-light-district.

“It was a really tough choice,” says Gaynor. “I knew I wanted to do Band of Gold, so I left Emmerdale. But the door’s open and that’s wonderful to know.”

So is working with her mum difficult? Does she tell Gaynor what to do all the time?

“Well, she’s my mum. Of course she does. Put it this way: she doesn’t hold back because I’m her daughter. It’s the opposite. She doesn’t let me off the hook but we have a short cut – it’s a telepathy kind of thing with family.” 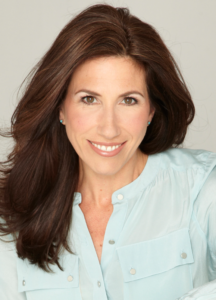 In Band of Gold Gaynor played Rose, the character portrayed so memorably on television by Geraldine James. Gaynor’s mum had faith in her that she could fill Geraldine James’s shoes.

“I had to make sure I filled them as well as I could. I was first out on the stage with a monologue and addressing the audience, so the pressure was on.

“Obviously you always want a project to be a success. But I wanted it to work on so many different levels. You can’t help but take on everything when it’s family.”

The last show Gaynor appeared in on television was The Syndicate, the fourth series of the BBC One drama written by her mum about a group of people who win the lottery. Gaynor played Cheryl Armitage, the fiancée of a convenience store owner, played by Neil Morrissey, who steals the winning £27 million ticket and disappears to Monaco. The series was shot in the middle of the pandemic.

“As much as it was wonderful to be working as an actor within that time, it was hard and a little bit of the sparkle wasn’t there because we had to adhere to Covid rules which were very strict.

“We were supposed to go to Las Vegas but America shut its doors to everybody so we ended up in Monaco. We got to get a bit of sunshine and luckily Monaco wasn’t in lockdown but they did have curfews. You had to wear a mask on the streets.

“The general consensus was that it was a really fabulous escapism show.”

Gaynor’s diary is empty after Looking Good Dead. She isn’t thinking that far ahead.

“I’m an actor who gets a job and just wants to concentrate on it. I’ll think about my next job when I’m coming to the end of the tour. I think about what I’m doing now.” 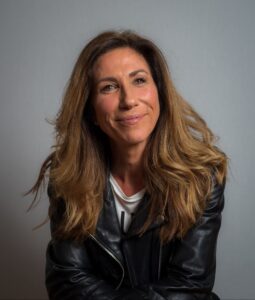 Gaynor is not just an actor. She penned a couple of episodes of the TV show Fat Friends and with her mother wrote a BBC One series called The Chase. She’s been a panellist on the ITV lunchtime show Loose Women and she was a guest presenter on the ITV programme Lorraine. In future she wants to keep doing a variety of things.

“Presenting, acting, writing, producing, directing – it’s all creative. I’d love to direct. I think that’s what I’d like to try my hand at next, doing some directing whether that be in theatre or TV. I know how it works – I’ve been doing it quite a while.”

But will she direct one of her mum’s plays? “Maybe. Who knows? That would be great. But she wants to direct some more theatre, so I think I’d have to wrestle her to do that!”

There is already a buzz about Peter James’s play coming to Nottingham, especially as it features Adam Woodyatt. The bonus is that Gaynor Faye is in it too: anyone who has experienced her work on the stage or TV will be as excited as she is about her return to Nottingham in Looking Good Dead.

NOTE: Looking Good Dead has been postponed and will now tour to the Theatre Royal in March 2022.