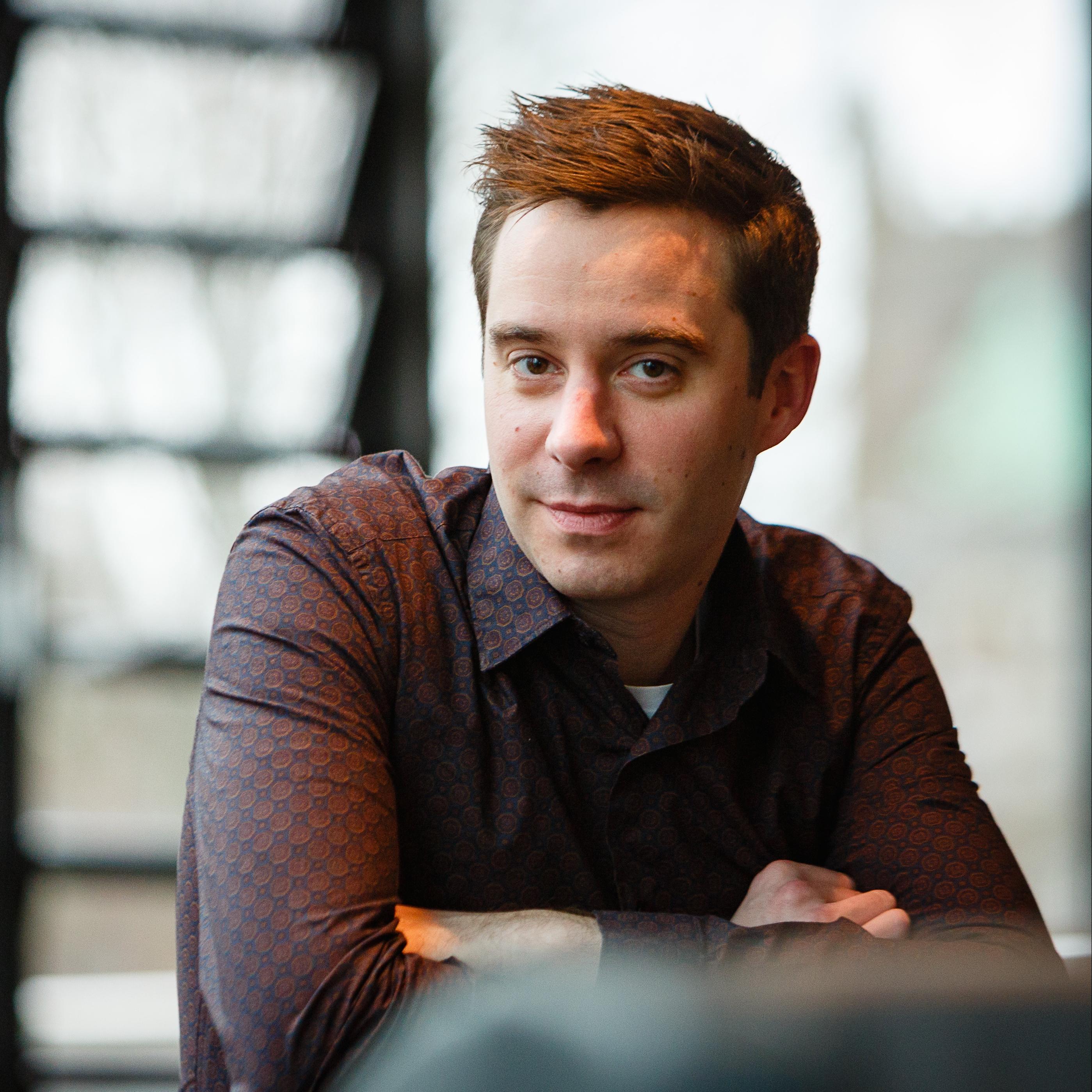 Quiz question: who is James Graham? Is he (a) the writer of the TV drama about the coughing scandal on Who Wants To Be A Millionaire?; (b) a collaborator working on a new musical with Elton John; (c) the winner of an Olivier Award for a comedy; or (d) the man who penned an episode of the Netflix Royal family series The Crown?

If you picked any of those, you’d be correct. James Graham from Kirkby-in-Ashfield, Nottinghamshire has been writing professionally for 15 years, in that time having one of his works voted play of the decade and being appointed OBE for services to drama and young people.

The 38-year-old playwright began at the age of six tapping out short stories on a typewriter. Now his work gets praise from critics as well as the public, with one national journalist describing him as “a writer of rare talent”.

That was evident during the three-part television series Quiz which analysed whether Charles and Diana Ingram and accomplice Tecwen Whittock cheated to win the top prize on Millionaire.

More than ten million people tuned in to the drama which aired for three consecutive nights. It’s the most-watched drama on television this year. The cast featured Michael Sheen as Chris Tarrant, with Matthew Macfadyen and Sian Clifford as the Ingrams. 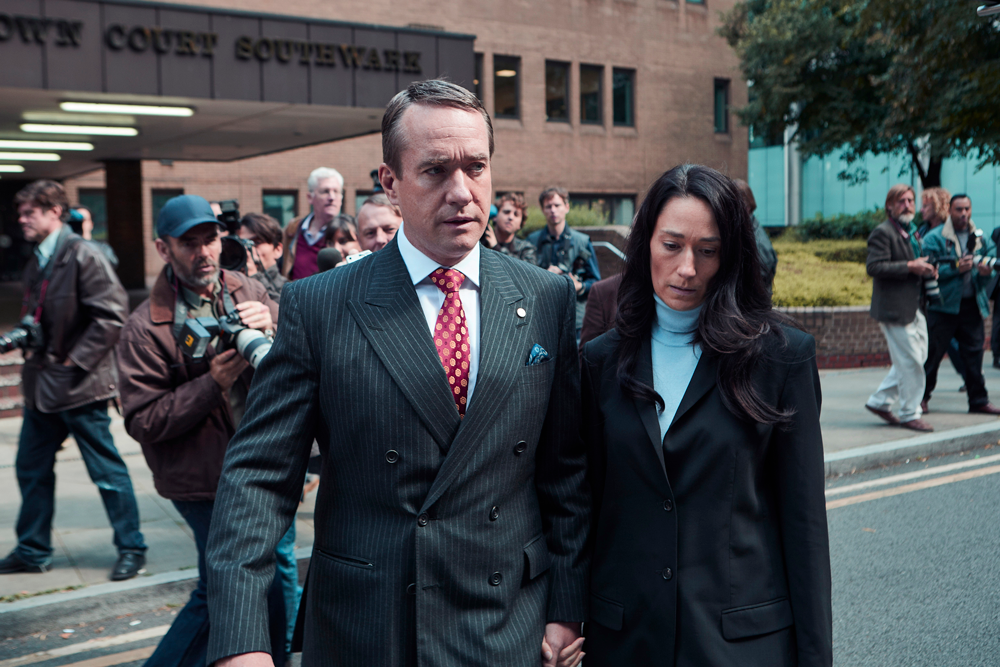 Matthew Macfadyen and Sian Clifford as Charles and Diana Ingram

James was thrilled by the reaction to Quiz and considers himself lucky to be able to write a television drama which started on primetime: Easter Monday.

“As someone who lives and breathes sharing work and engaging with an audience, to be able to share Quiz in quarantine with people who were locked in their homes wanting entertainment felt like a huge privilege.

“The most satisfying thing of the whole experience of Quiz was in some cases it was the first time that families had sat down and watched the same thing with their kids in the same room on the same device, as opposed to being in different rooms of the house watching different things. That was really exciting.”

James admits that he has a fixation with Who Wants to be a Millionaire?

“I absolutely fell in love with it as a kid, watching it at my grandparents’ house in Mansfield on a Saturday night. I was obsessed with the coughing major trial as much as anybody else and whether these relatively well-to-do, respectable people had tried to steal a million pounds live in front of cameras and a studio audience. That’s such a compelling story.”

“The reason I fell in love with Michael (Sheen) as an actor was because of his political work, being Tony Blair and David Frost.”

When writers pen a TV drama, they may not meet the cast until they start recording, unlike a theatre production where actors can have weeks in the rehearsal room. James didn’t meet Michael Sheen until he arrived on set.

“Michael had just flown in from filming an American TV drama. When he first walked onto the set, with his wig and his tan, and started to transform into Chris Tarrant, I was giddy like a schoolchild. You don’t think you’ll get to work with such famous talent and brilliant actors.

“The reason I fell in love with Michael as an actor was because of his political work, being Tony Blair and David Frost.

“To be honest, we didn’t know when we offered Michael the part whether he would think it silly and ludicrous, the idea of representing Chris Tarrant and a supporting role as well – not the lead part.

“I was grateful that he seemed so fixated and compelled by this story that he was willing to have a laugh and give it a go.” 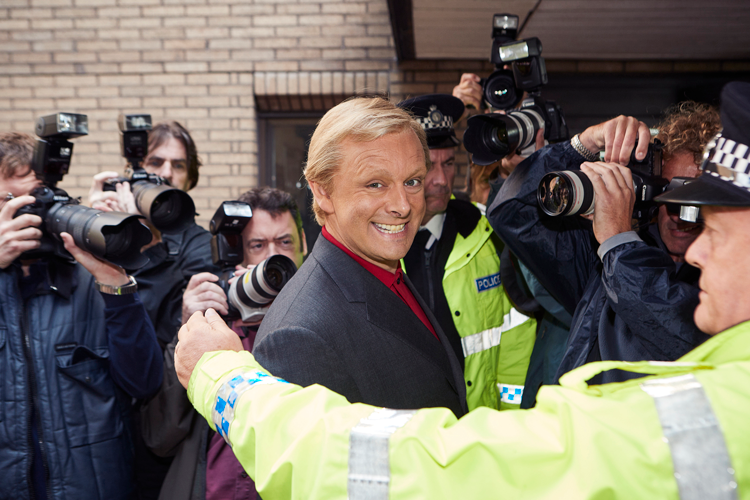 Born on 8 July 1982, James Graham went to Kirkby Woodhouse primary school and Ashfield School. He developed his love of plays and theatre at Ashfield before becoming the first in his family to go to university, studying drama at Hull.

While there he teamed up with another former Ashfield pupil, Gary Roden, to write a play, Coal Not Dole, which they took to the Edinburgh Festival in 2002.

Growing up in Nottinghamshire, surrounded by down-to-earth people who weren’t afraid to say what they thought, influenced James’ writing.

“My access to art was through school plays and going to see pantos at Nottingham Theatre Royal. I remember seeing some Shakespeare that was touring to the Theatre Royal as well. I saw Pete Postlethwaite playing Macbeth which was hugely influential on me. I was inspired by that.

“Normally in certain areas there’s a level of ideological conformity. I always admired and loved my little pocket of north Nottinghamshire because it’s been incredibly inconsistent. If you look at the miners’ strike, in the heart of Nottingham miners went back to work and formed a breakaway union. In my villages they were often split down the middle with different people making different choices.

“I think you have a responsibility to entertain.”

“I think that’s instilled in me a desire to see different sides and a balance in my political writing.”

James’ first major play, This House, is set in the Palace of Westminster in the whips’ office between the 1974 general election and a vote of no confidence in the government of James Callaghan five years later.

It premiered at London’s National Theatre in 2012 and in a public vote received the accolade Play of the Decade.

In 2018 James won an Olivier Award for his play Labour of Love – another political offering. It tells the story of a Labour MP over 25 years in Kirkby-in-Ashfield. Surprisingly the award was for best new comedy. James stresses that he tries to put comedy into his plays.

“Having not grown up with a huge amount of theatre, I think what’s important is make people want to come and have a good night as opposed to staying at home and watching Netflix. I think you have a responsibility to entertain. 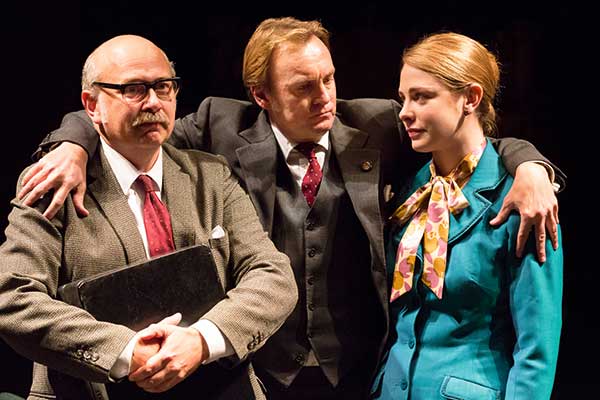 Vincent Franklin, Philip Glenister and Lauren O’Neil in James Graham’s play This House which premiered at the National Theatre

“Labour of Love was such a joy because I set it in the constituency office of the Labour Party in Ashfield. The sound of that accent, those colloquialisms and ‘ayup me ducks’ – it was such a mischievous treat to place that on a West End stage. The fact that I got an Olivier was the icing on the cake.”

James’ other successes include Ink, a play about the early days of Rupert Murdoch; a film for Channel 4, Brexit: An Uncivil War, which starred Benedict Cumberbatch as Dominic Cummings, at that time campaign director of the Brexit-supporting group Vote Leave; and an episode of The Crown about the investiture of the Prince of Wales.

On top of that, James wrote the script for the musical Finding Neverland, with Gary Barlow providing the songs, and he is now writing a musical with Elton John.

A director who was working with Elton approached James to work on a story about a 1980s television evangelist who Elton admired because of her sympathy towards the AIDS community.

So what does James look for when he starts a new project?

“I always enjoy finding quirky, very British, idiosyncratic tales of obsessiveness that somehow illuminate something greater about the state of our nation, what that says about us and our politics and our nature.

“I have fun and entertain while trying to answer some questions as well.”

James acted at school and university and enjoyed it – but he feels acting is probably an even harder and more precarious profession than playwriting.

“At least with being a writer you can generate your own ideas. As much as performing on stage and having all that attention is fun, I quite like being alone in my room with the windows and doors closed. Most of the time it suits my nature.”

James’ mum, stepdad and the rest of his family still live in Nottinghamshire and he tries to see them as much as possible. He’s also an associate artist at Nottingham Playhouse, which means working with the artistic team to share ideas and provide support. But with the theatre closed, many productions are on hold or have been cancelled.

Quiz started life as a play and a revival should have toured to the Theatre Royal in Nottingham. The tour has been postponed.

But James has plenty to be going on with, apart from the musical with Elton John. He’s working on another political play, this time about former Prime Minister John Major.

“This is going to sound like the most boring play in the world but I find him incredibly interesting. He’s presented as quite grey but he’s always fascinated me. The play’s about his struggles with his own party against the backdrop of huge tensions in the Conservative Party regarding Europe and the Maastricht vote.” 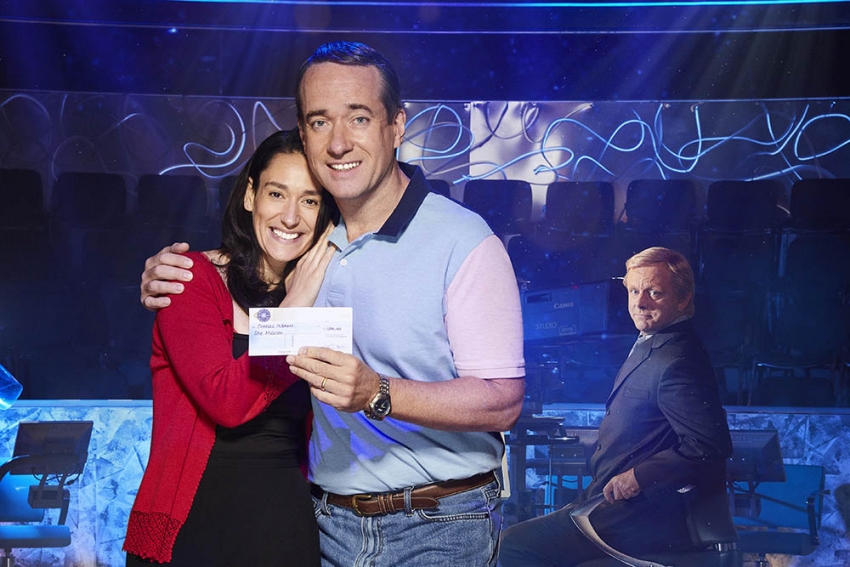 Another project pushed back because of coronavirus is an idea that Michael Sheen put to James. “It’s a three-part drama set in Port Talbot where Michael’s from.

“It’s a depiction of social unrest. We thought a lot of the things such as military lockdowns were too fantastical but it’s funny how sometimes reality makes things that you think are far-fetched more realistic than you’d hoped.”

And then, of course, James will be going to Buckingham Palace on a date yet to be decided to pick up his OBE.

“It’ll be a special day when it happens. It was a huge surprise (to be nominated). Very briefly a thought runs through your head that as a political playwright whose job it is to interrogate and scrutinise the establishment, do you feel bad being part of that establishment? But I quickly got over myself because I knew it would mean a lot to my family.”

Theatre audiences have been deprived of James Graham’s talents during lockdown. But the man who spends most of his life “on my own, in my own head” has been as prolific as ever. It will be fascinating to see what this writer of rare talent comes up with next.