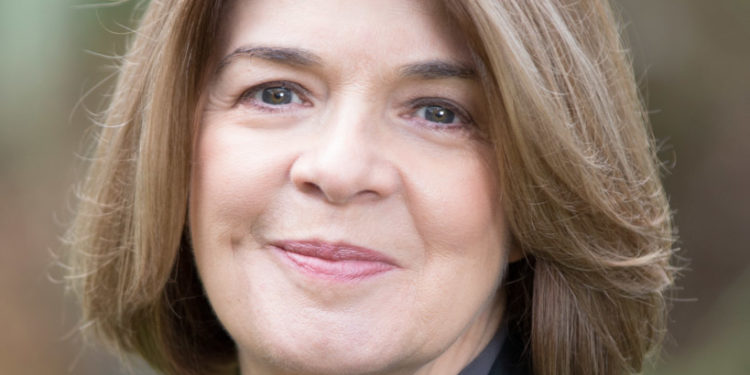 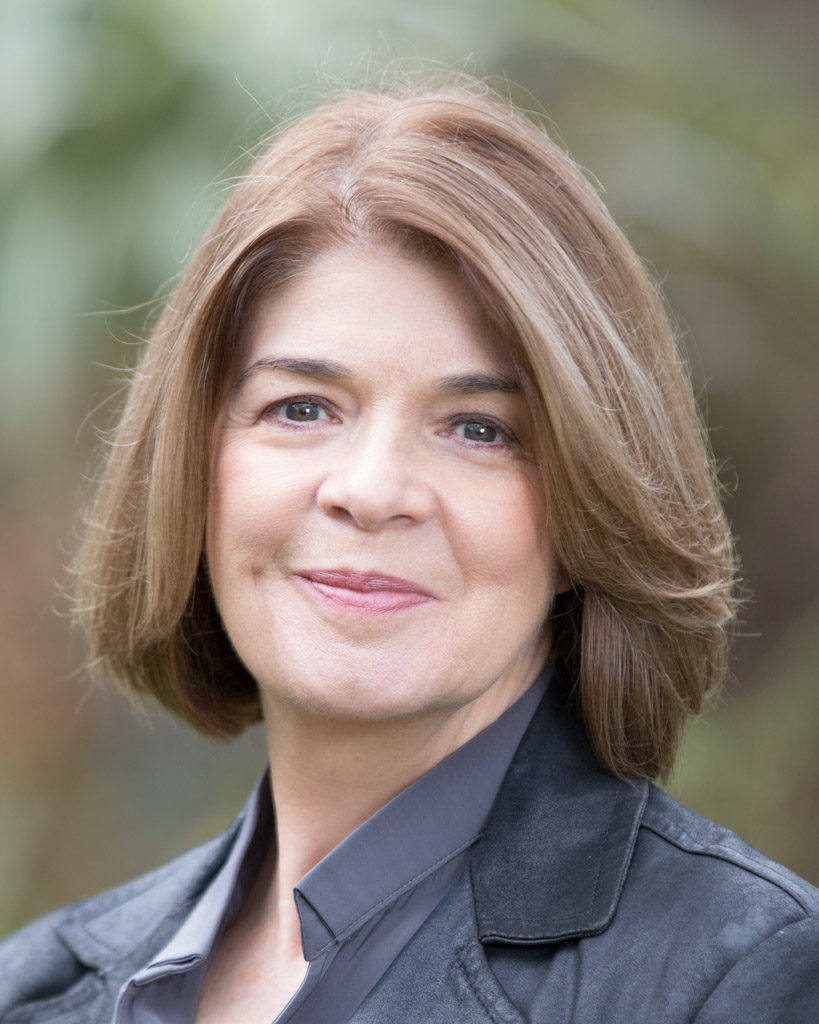 Oozing confidence, charm and charisma, Julia Watson saunters around a church she’s known for many years, entertaining a rapt crowd with tales of her career and reciting some of literature’s greatest lines. It’s obvious that she was cut out to be on stage and it’s no surprise later when she tells me “I love acting”.

Brought up in Derby and introduced to the theatre at an early age, Julia is best known for playing Barbara “Baz” Wilder in the BBC medical drama Casualty, a role she returned to on a couple of occasions.

But as she demonstrates when appearing at All Saints Church, Mackworth village, she’s a talented all-rounder who completely inhabits a character – including Margaret Thatcher who she played in a theatrical production in 2017.

A couple of days later Julia spoke to me from her home in Barnes, south west London about how she loved her time with Derby Shakespeare Theatre Company, why she became a fire-eater and how questions were asked about Baz in Parliament after she was featured on the front page of the Sunday Times.

She revealed that she wasn’t desperate to play Baz and told her agent she wasn’t sure if she wanted to be in a medical drama. Her agent replied: “Brenda Fricker and Derek Thompson are in it. You just do it. It’s going to be very high profile.”

“(Casualty)  was a very happy time, actually. It was great fun to work on.”

When talking about her career, Julia often uses the phrases “great fun” and “happy time”. That’s how she describes Casualty.

“Originally it was only supposed to be 15 episodes. It’s extraordinary to think it’s still going. I did the first series and then I was offered something else and decided I didn’t want to stay. I was a junior doctor and junior doctors move on, so I would have had to move to another part of the hospital and come back as a love interest with Charlie (Fairhead) and I didn’t want to do that.”

Nine years later Julia was asked to return to the series and her relationship with Charlie grew. “I came back two or three times. It was a very happy time, actually. It was great fun to work on.”

So how much of Julia was there in Baz?

“In a sense those kind of parts on television are about personality acting, I always think. You’re cast for who you are. So of course there’s an element of you within that character. 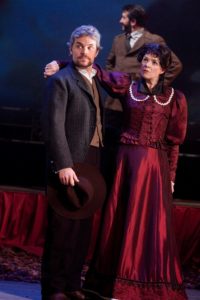 “You just have to be careful not to say ‘I don’t think my character would do this’ because it’s actually not you. But there is a point when you’ve played her for so long you start to know her almost better than some of the scriptwriters because they don’t know the back story like you do.

“She was huge fun to play because in the first series she wasn’t very competent at her job. She was popping pills to keep going and getting drunk.

“I ended up on the front page of the Sunday Times and there were questions asked in Parliament about how the NHS and a junior doctor could be portrayed in that way. But of course they’d done their research and it was all accurate.

“Charlie knew much more about everything than Baz did. And yet she was in charge of him. There were interesting hierarchies that the first series explored very well.”

The storyline in which Baz had an affair with Charlie Fairhead provoked some strong reactions from viewers, including nasty letters disapproving of the way Baz behaved.

“Charlie is a national treasure,” says Julia. “If Baz wasn’t treating Charlie very well I used to get it in the neck when I bumped into people. But I’d say ‘it’s not me, it’s a character’.”

Eventually Julia left the series in 2004 when Baz was killed in a car crash.

“I thought there was a limit to how many times I could come back,” she says. “We’d done everything. Charlie and I had been married, divorced, married to other people – there wasn’t really any further for the storyline to go.”

She confesses it might have been a bad decision because the casting director of the spin-off series Holby City said if she hadn’t been killed, she could have worked on that programme.

“But I never wanted to be a long-running character. I’ve always liked variety and to do stage as well as television. So I thought it was time to leave Casualty.”

“This profession is never easy when you’ve got children.”

She also admits there was pressure from her husband, writer David Harsent, and her daughter Hannah to give up Casualty because they hardly saw her as she was away filming in Bristol for ten months of the year.

“Although I would have two days off a week, sometimes they weren’t concurrent, so I spent my life on the motorway just driving back and forth. David said ‘this just isn’t working – either you’re part of this family or you’re not’.

“By that time I was playing consultant head of department so I was in every episode. It became hard and I felt I was missing out on Hannah’s life. This profession is never easy when you’ve got children.”

Julia Watson was born on 13 September 1953 in a small village in south Wales. Her father moved to Derby to work at Rolls-Royce when Julia was a baby. She says she had a very happy childhood.

“We were perfectly placed. We were only 60 miles from Stratford. My father was passionate about Shakespeare so from the age of eight I saw virtually every play in every season. And there was lots of amateur theatre in Derby. There was lots to keep me occupied.” 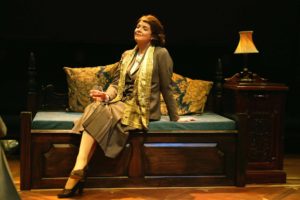 She joined Derby Shakespeare Theatre Company, working backstage and being cast in small roles before at the age of 16 she got the part of Juliet in Romeo and Juliet.

“It was a very happy time. I loved my time at Derby Shakespeare Society. It was wonderful to be around people who were so passionate about theatre and about Shakespeare too. I learned a lot by watching. There were some wonderful actors like Jessica Clewes and (the late) Ken Pipes – great role models.”

She was unable to get a grant to go to drama school, so she read drama at Exeter University. Three days before her finals she was in London auditioning for a couple of jobs and got one of them, helping to set up a community theatre in Byker, Newcastle upon Tyne.

“It was a baptism of fire but I learned a lot,” says Julia. “I learned to fire-eat amongst other things because I couldn’t sing, I couldn’t dance and I couldn’t play an instrument so I wasn’t sure how useful I was to them in a community theatre. So I thought if I learn to fire-eat I’ll have a skill that nobody else has. I used it quite a lot over the years but I’ve decided my fire-eating days are now over.”

Julia then joined the Roundabout theatre-in-education company at Nottingham Playhouse. She was about 23. It was to be a turning point for her.

“A couple of us were asked if we would take part in a main stage play, Bartholomew Fair by Ben Jonson. As soon as I got on that stage I went ‘oh, this is what I want to be, I want to be a stage actress’.” 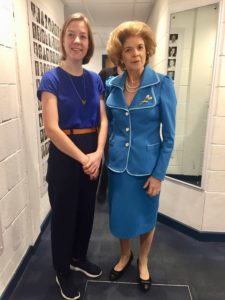 Julia as Margaret Thatcher with designer Louie Whitemore in Handbagged by Moira Buffini at the Theatre by the Lake, Keswick in 2017

Over the years she has performed in productions all over the country, including appearing five times at the National Theatre. Her biggest regret is that she never worked for the Royal Shakespeare Company.

She has also been seen on television in Midsomer Murders, Not Going Out – and the daytime medical soap opera Doctors!

Julia returns to Derby probably once a fortnight to see her 97-year-old mum Enid. “I was offered a very long job actually this year, six or seven months. But it would have meant I couldn’t get back to mum.”

Enid was in the audience at All Saints Church when Julia and two of her friends, Vivien Heilbron and David Rintoul, regaled guests with stories of their lives as actors. They were helping to raise money for the church which needs £100,000 to repair its tower.

Julia threw herself into the performance even though there was a relatively small audience. After an illustrious career, her passion for the stage is undiminished. She adds simply: “The day I stop loving it I won’t do it any more.”