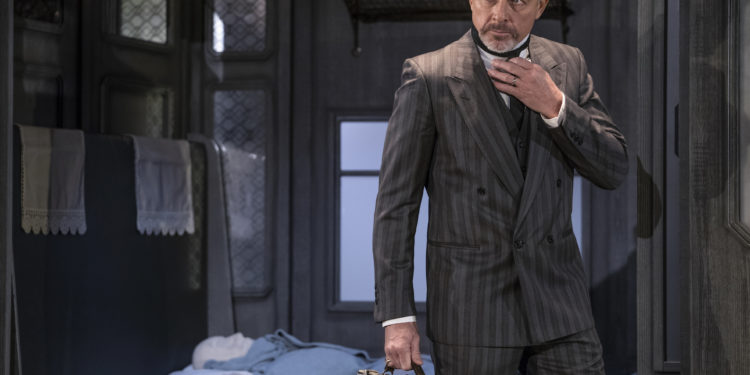 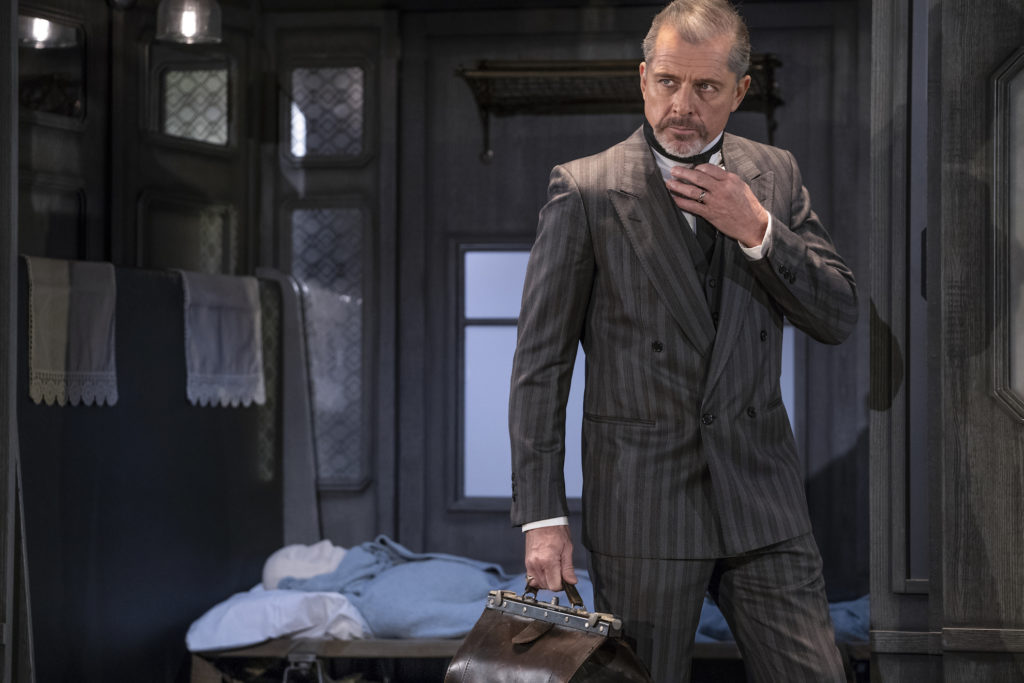 Maxwell Caulfield as Dr Hartz in The Lady Vanishes

Whenever anyone lists the finest actors who originated from Derbyshire, names such as the late Alan Bates and John Hurt usually crop up, closely followed by current heavyweights such as Robert Lindsay and Jack O’Connell. It’s rare that Maxwell Caulfield is included.

Born in Duffield, Maxwell can genuinely be described as a Hollywood superstar. He was playboy Miles Colby in the blockbuster series Dynasty and the spin-off The Colbys, he’s made more than 40 films, played Mark Wylde in more than 150 episodes of Emmerdale and has appeared as lawyer Billy Flynn in the long-running musical Chicago on Broadway and in London’s West End.

He’s back in this country in The Lady Vanishes, a high-profile production based on the film directed by Alfred Hitchcock which is touring the country for most of this year.

The bonus for Maxwell is that his 77-year-old wife Juliet Mills, sister of Hayley, is also in the cast. She’s 18 years older than Maxwell. They met on stage and fell in love. Critics said the marriage would never last. Last year they celebrated their 38th wedding anniversary.

In a wide-ranging conversation Maxwell told me about his Derbyshire roots, why he loves coming back to this country so much and how he’s hoping to perform with his “English rose” Juliet in a play that features only the two of them. 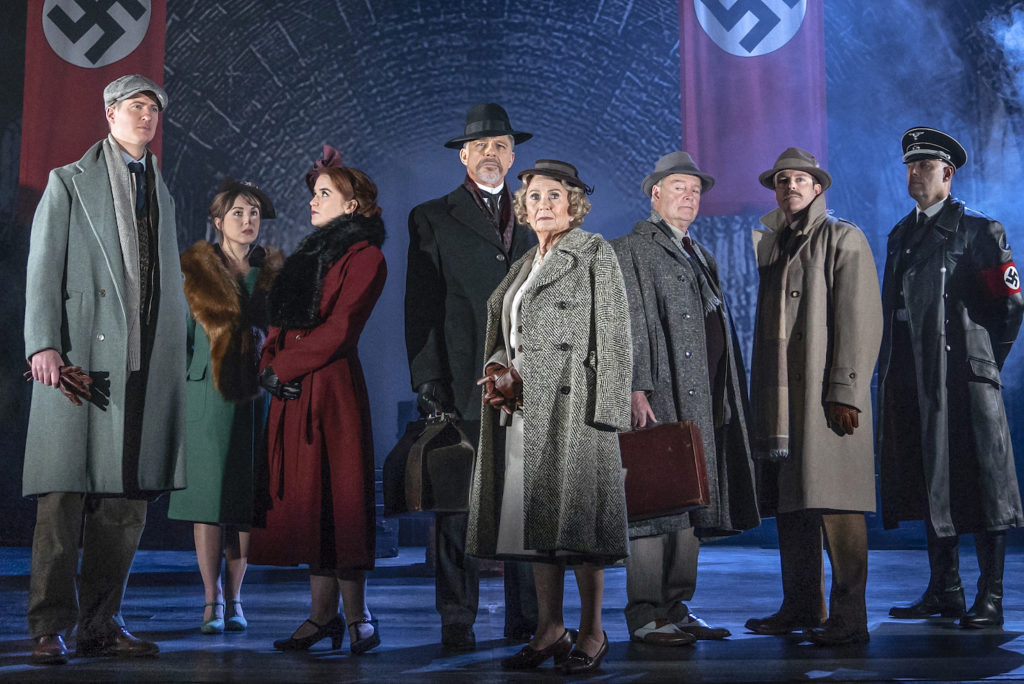 The cast of The Lady Vanishes

There’s no sign of pretentiousness with Maxwell. He sounded genuinely pleased that Country Images wanted to give publicity to The Lady Vanishes and he gladly gave up his time to be interviewed.

And throughout our chat his love for Juliet shone through. He signed off with “the home-grown lad is proud to be coming back to the county and showing off with his beautiful bride.”

In The Lady Vanishes Maxwell plays Austrian brain surgeon Dr Hartz. The play is set on a train hurtling through the Austrian Alps in the late 1930s on the eve of the Second World War.

“The show is a bit of a runaway train in itself,” says Maxwell. “It’s got laughter, there are a couple of demented cricket fanatics who seem oblivious to everything that’s going on around them – they’re so hell bent on getting to the Test match at Old Trafford.

“And there’s a burgeoning romance at the heart of it, the young heroine who’s haunted by the disappearance of the lady who befriended her at the train station in Austria before it set off.”

“I’ve always maintained that live performances stay with you, more so than a movie that’s knocked you out.”

The play is being produced by Bill Kenwright’s Classic Thriller Theatre Company and, according to Maxwell, Kenwright has spent “good money” on the set and costumes.

“It’s a first-class production and we’ve got a very strong company. We think we’re delivering a good couple of hours’ entertainment, hopefully for a fair price. The price of a cinema ticket these days is the same price as a theatre ticket, so why not come and see something live and something that you’ll really remember.

“I’ve always maintained that live performances stay with you, more so than a movie that’s knocked you out. All kinds of stuff happens in live performances. Guns jam, train compartment doors don’t close when they have to, actors playing multiple parts come on wearing the wrong costume. It keeps us all on our toes. Based on the curtain calls we’ve been taking, everybody seems to have enjoyed themselves which is the name of the game.”

Strangely Maxwell and Juliet don’t have any scenes together in The Lady Vanishes. “It’s probably a relief for her not to have to deal with me for a couple of hours! I just love being on the boards with her. Because we’re in each other’s pockets all the time when we’re on tour, it’s a very intimate experience. If you’re not driving in the car you’re moving into the digs together and then into the theatre.”

Maxwell Newby was born on 23 November 1959. His parents divorced when Maxwell was very young. His father lived in Chesterfield for a long time and died there, so Maxwell is delighted that The Lady Vanishes will be visiting the Pomegranate Theatre in the town.

Although his mother took Maxwell and his brother Marcus to live in London, they would spend a lot of time in the summer holidays with their grandparents, Tom and Mavis, in Littleover.

Maxwell’s aunt Margaret and uncle David live in Littleover and they’ll be meeting up when he and Juliet return to the county.

“The connections to Derbyshire are very strong even though I didn’t spend a lot of time there in my youth.

“It’s always good to come back and connect with your roots. Juliet and I both elected to live in America but it does come at a bit of a price. You get the sunshine although there’s a bit of a disconnect living all the way over on the west coast.”

Maxwell is grateful that he can return to Britain on a regular basis. The first three UK tours he did all stopped off at the Theatre Royal in Nottingham: in 2010 he and Juliet were in the Alan Ayckbourn play Bedroom Farce, then musicals Singin’ In The Rain and Guys And Dolls.

Maxwell even did a few dates at the Theatre Royal in The Rocky Horror Show, playing the Narrator. “I remember playing to an absolutely packed house. I’ve never heard such a torrent of abuse. I didn’t realise that part of the show has the audience barracking the narrator throughout. It was quite a shock. It was just like I’d missed a sitter at Pride Park!”

That was one of the few occasions he wasn’t appearing alongside Juliet. They met in 1980, a couple of years after Maxwell had moved to the States, when they both performed in the play The Elephant Man.

“That was a wonderful experience and we fell hook, line and sinker for one another,” says Maxwell. “We would like to work together more but it’s rare that you get cast in the same film or TV project.

“They say that show business couples don’t work very well together, the sparks don’t fly because they know each other too well. In the plays that we’ve done together people have said they really enjoy watching us and there’s real chemistry. And I certainly love acting opposite her.”

Maxwell can’t say much at this stage about the play he and Juliet want to do together but he feels the time is right for him to do it.

“Hopefully you get better as an actor and funnily enough you realise you don’t have to work so hard.

“When the profession’s good it’s great and when it’s giving you the cold shoulder it’s tough. But this is a purple patch we’re in now – we’re enjoying it.”

“Thank God I’m in a profession that, as long as British theatre remains as healthy as it appears to be, I can stay gainfully employed.”

Maxwell is looking forward to playing the Pomegranate, especially as it’s a theatre he’s never been to.

“Sometimes touring in England, particularly in the dead of winter, may be taking it a bit far – lugging suitcases up five flights of stairs or on your day off driving 300 miles to the next date. You look for the light at the end of the tunnel but we’ll be full of beans for the Chesterfield date, that much I know – still full of enthusiasm and esprit de corps.”

After being on stage in Hollywood and enjoying life at the top, why did Maxwell sign up for the tour of The Lady Vanishes?

“Frankly, it’s a living. I was reading in a newspaper about how automation is going to erode the workforce by 20 to 50% in the years to come. So what the hell are people going to be doing? I don’t know.

“Thank God I’m in a profession that, as long as British theatre remains as healthy as it appears to be, I can stay gainfully employed.”

The boy from Duffield who made it big in Hollywood should have no worries about that.