Peter Wight: from Duffield to the National Theatre 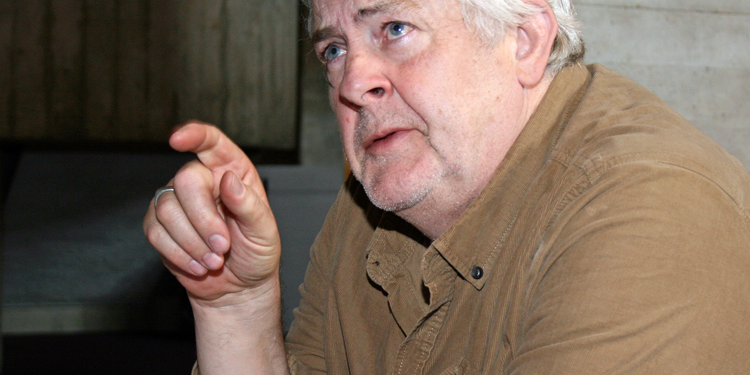 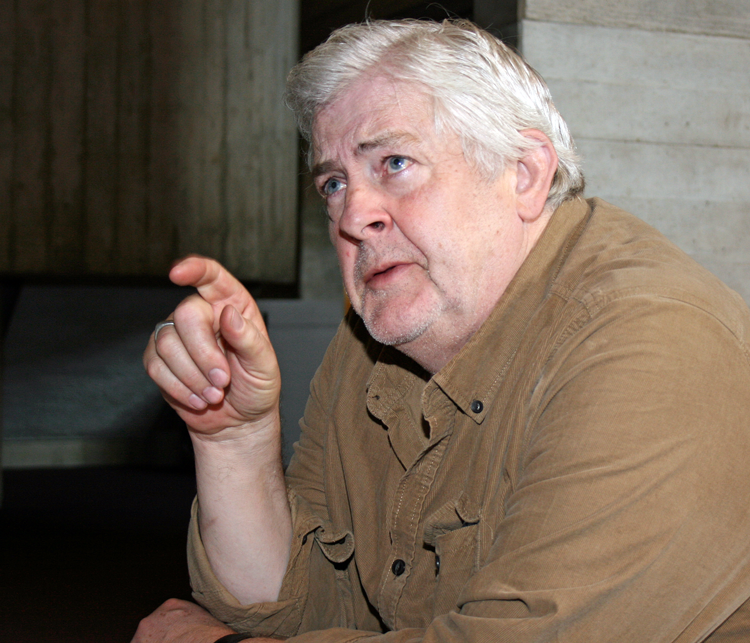 Peter Wight played a newspaper editor in the second series of The Crown, the Netflix drama about the Royal family. I met Peter at the National Theatre in 2015 where he was appearing in Patrick Marber’s play The Red Lion. This article appeared in the September 2015 edition of Country Images magazine.

The name may not be familiar – but the face certainly is. Peter Wight has appeared regularly over the past 35 years on stage, the small screen and film in all sorts of heavyweight dramas. Yet he is best known for appearing in a television comedy series which has achieved cult status.

Peter played Nige, one of two incompetent, work-shy policemen in Early Doors, a BBC sitcom set in a Manchester pub and first broadcast 12 years ago. The programme is so revered that people who recognise Peter quote many of his lines from the script. Not bad for someone with no formal training as an actor whose first real stage experience was at the old Derby Playhouse with the Derby Shakespeare Theatre Company.

I met Peter at the National Theatre where he is performing in a new play by Patrick Marber called The Red Lion. It centres on a non-league football team fighting for promotion; the club finds a young, potential star who could play at a high level but the manager and a club stalwart have different ideas about how his future should be handled.

Peter, well-spoken and eloquent, admits he drew on his experience of watching Derby County as a youngster when he was thinking how to portray kit man John.

“That period, the late ‘60s, and Derby County history, has really informed my imagination for this play. So it was really useful.”

“I got into watching football with Derby County after the World Cup in 1966. Derby was my local club. This was pre-Brian Clough and I used to go to the Baseball Ground regularly.

“The old-style club is very redolent for me of this play. There are a lot of images and characters that I remember seeing at the ground and things I read about the club that are really vivid.

“When Clough arrived in 1967 I lived through this amazing transformation of Derby County from a beaten-up, lost giant sleeping at the bottom of Division Two, as it then was, with battered old corrugated iron stands at the Baseball Ground. It was a magical time. That period, the late ‘60s, and Derby County history, has really informed my imagination for this play. So it was really useful.”

Peter Wight was born in Worthing, Sussex in 1950. He was only six months old when his mother took him to Duffield to join his father who had become a partner in a GPs’ practice. The young Wight went to primary school in Belper.

His parents were keen theatregoers and took him to the old Derby Playhouse on Sacheverel Street. Peter started to get the acting bug and it continued at boarding school. 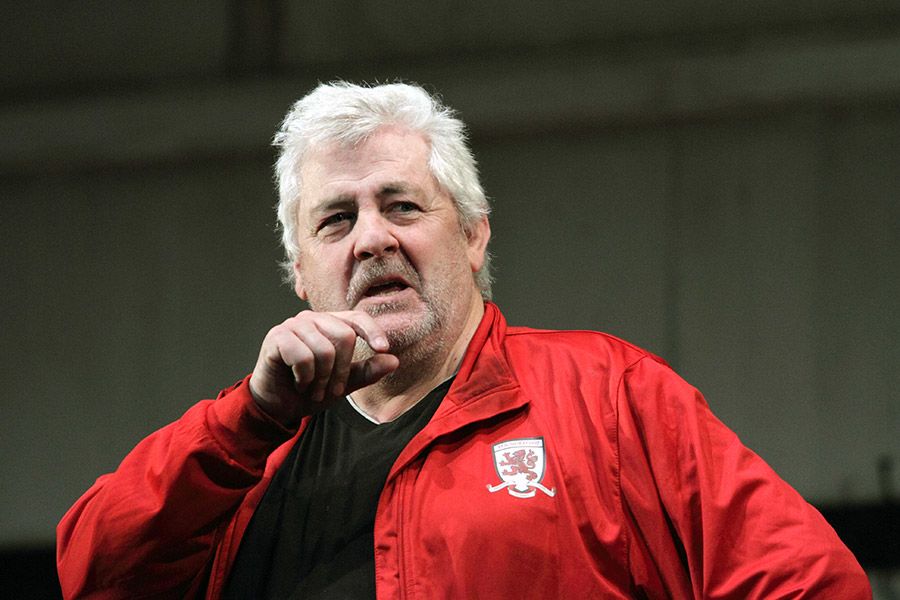 “One of my favourite memories was Derby Shakespeare society. I had a little part in their production Twelfth Night in 1969 at the old Playhouse. That was magical. Then they wanted me to play Romeo in Romeo and Juliet but by that time I’d gone away to university so I couldn’t do it.”

Peter considers that the atmosphere backstage at the old Playhouse was similar to the Baseball Ground: both were “pretty battered but very romantic”.

He also took himself off to Nottingham Playhouse which “by contrast was a gleaming new, exciting 1960s palace. I would sit in the café before a matinee and I’d see the actors sitting in a corner, laughing and talking about rehearsals, smoking and drinking.

“Later on, in the ‘70s, after I’d started acting professionally, a very good friend of mine worked in Richard Eyre’s company at Nottingham Playhouse. That was a fantastic company too. I saw some wonderful productions there. Nottingham’s been a big part of my theatre history.”

Peter studied English at Oxford and went there because it had a good dramatic society. He lost interest in English as acting took over. He had no formal training because he could not afford to go on a three-year course after university. But work started to come in.

“I didn’t feel like a proper actor in the first five years of my career: it was more a psychological thing because I hadn’t trained formally. But once I got working, that sense of insecurity fell away. Actors who’ve been to drama school would say ‘I wish I’d gone to university instead of drama school’ and I wish I’d gone to drama school instead of university. It all evens up in the end. The main thing is experience of being in plays and I’d been lucky enough to get that at uni.”

Peter is like many actors who believe they have been fortunate in their career. He has not had months without a job – but this could be because he has worked incredibly hard.

“When I started, I wasn’t selective – I would do anything I could get my hands on, little spear-carrying jobs, kids theatre, community theatre, anything. Then I did a rep season at Hornchurch, the first proper repertory season I’d done, nine plays. Since then I couldn’t have planned it better but there really wasn’t any planning on my part. Mostly in the last 20 years it’s been really good work, interesting projects. So I’ve been very lucky.”

On television Peter’s work includes Z Cars, The Sweeney, Minder, The Bill, Casualty, A Touch of Frost, Midsomer Murders, Silent Witness and New Tricks. More recently he was Edmund Lovett in the BBC TV series The Paradise in 2013.

On film he has appeared alongside Keira Knightley in both Atonement and Pride and Prejudice; played a detective in Personal Services which starred Julie Walters; and arrested Imelda Staunton for carrying out illegal abortions in the Mike Leigh film Vera Drake. 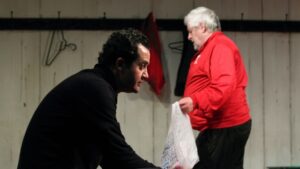 Peter laughs when I point out that he has played many policemen: “I’ve been for so many auditions for a copper and my joke is I just wish I’d become a policeman – at least I’d get a pension! But I’m too old to get away with it now.

“The corrupt, stupid copper who sits in the back room of the pub doing nothing in Early Doors – that’s one of my favourite jobs. That’s the series where I get recognised most now.”

On a recent visit to Derbyshire Peter took in a match at Belper Town and as he walked around the ground fans were quoting lines from Early Doors to him.

The Red Lion is the fifth time he has played at the National Theatre and he also trod the boards with the Royal Shakespeare Company. When I suggest that he is a versatile actor who directors can depend on, he replies: “That’s very sweet of you.

“I look at my CV and it’s as though I’m reading about someone else. There are things I’ve forgotten that I did.

“I first worked here (at the National) in 1987 so I’ve been under four regimes here: Peter Hall, Richard Eyre, Nick Hytner and now Rufus Norris. It’s a great buzz and it’s a lovely place to work.”

Which does Peter prefer: stage, screen or television? 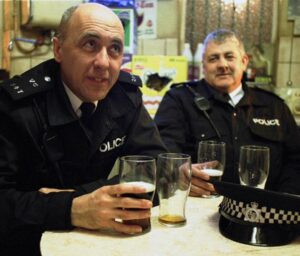 “I love the balance that I’ve been lucky enough to have in my career. I started in theatre, so if I was strapped down and forced to choose I’d say theatre because theatre is very satisfying.

“Sometimes rehearsals can be very frustrating because it’s not a smooth process, it’s a struggle, but a good struggle when you’ve got a good play. And when you’re performing it it’s the growth of something over a long period that you can sustain.

“That’s the satisfying thing about theatre whereas film and TV are very fragmented the way they’re structured. But I do love filming and TV jobs can be really lovely, like a couple of series I’ve done over the last few years – they’ve been some of my favourite work. It’s swings and roundabouts. I love the mix.”

After The Red Lion ends its run, Peter will be filming a series for the internet channel Netflix called The Crown. It is set in the 1950s and looks at the early years of Queen Elizabeth’s reign.

If the dates work out he will also be appearing in a new, six-part, BBC comedy series with Ben Miller called I Want My Wife Back. “I’ve only read one episode of it but it’s very funny,” says Peter.

In the audience on the day that I saw The Red Lion was Danny Boyle, director of films including Trainspotting and Slumdog Millionaire, and artistic director of the opening ceremony of the 2012 London Olympics. Peter has never worked for him; so, I joked, could Danny have Peter in mind for a future project? “I’m waiting for the call, Danny!”

If Danny does ring him, he will get one of the most personable people I’ve ever met whose talents mean he can put his individual stamp on any role he takes.

*  This article originally appeared in Country Images magazine in September 2015