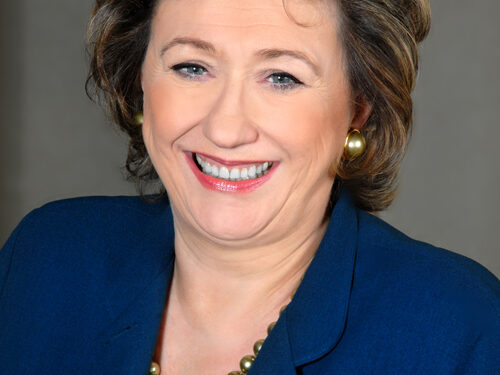 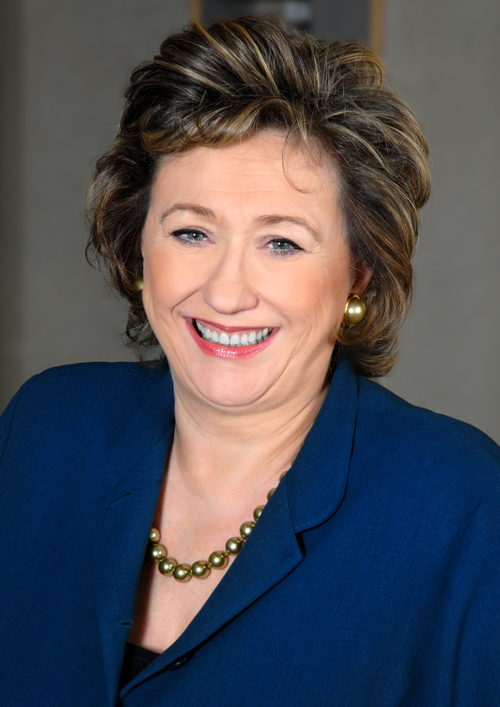 Few people in any walk of life have experienced success like Rosemary Squire. The Nottingham-born entrepreneur and philanthropist not only used to run the world’s top theatre company, she also helped to raise more than £20 million for London’s Great Ormond Street Hospital.

Her talents and generosity were recognised in the New Year Honours three years ago when she became Dame Rosemary. Not bad for someone who developed a love for theatre at an early age and was determined to learn every aspect of the industry.

Did she think when she was at school that she might have a career in theatre?

“No, although my best friend does remember me being 16 or 17, standing on the steps in the foyer at Nottingham Playhouse, looking down and saying ‘this is what I want to do – I want to be a theatre manager.’

“I didn’t actually know what that meant but I just loved it. I loved the noise, the expectation, sitting in the auditorium and then everybody going quiet. It’s magic.”

“We were always ambitious and we had a vision: what we wanted to see was a properly integrated business. Theatre was and still is very fragmented.”

It was an exciting time at the Playhouse in the early 1970s: actors including Judi Dench and Jonathan Pryce trod the boards and its young artistic director was Richard Eyre, later to head the National Theatre in London.

Rosemary worked at the theatre on front-of-house duties and in the box office. She also worked at the Odeon Cinema just off the Old Market Square.

Her work ethic was one of the reasons why she and business partner Howard Panter who is also her husband were able to turn the Ambassador Theatre Group into a powerhouse in world theatre.

“It didn’t happen overnight,” says Rosemary. “We were always ambitious and we had a vision: what we wanted to see was a properly integrated business. Theatre was and still is very fragmented.

“As an independent producer it was always very difficult to secure theatres for your productions and you were at the mercy of a third party. 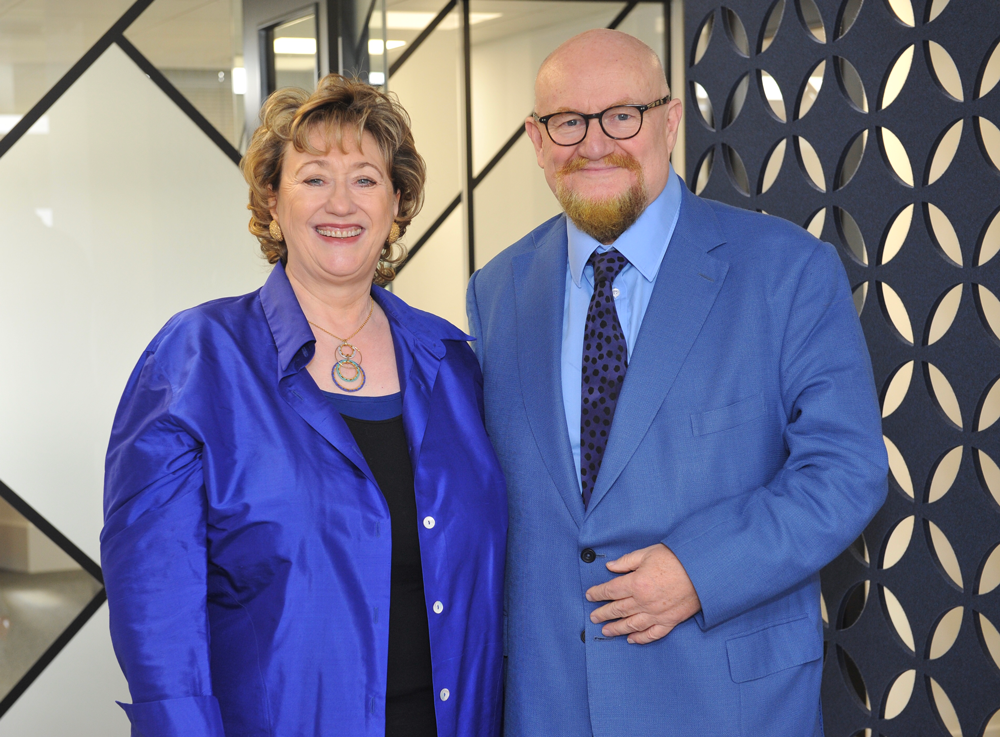 Rosemary Squire with her husband and business partner Howard Panter

“By bringing it all together we created a business that was sustainable and robust.

“We started small and eventually we became international. We were the first British company to own a Broadway theatre which was quite a remarkable achievement.

“We were frequently the underdog who was underestimated. But we worked very hard and when there was an opportunity, we seized the moment.”

In 2016 Rosemary and Howard stepped down from Ambassadors.

“It had become a huge international business and it was time to go back to our roots and get closer to the work.”

“I suppose I was really fortunate that I got introduced to theatre because my mother liked it and took me to the Playhouse.”

Now, as bosses of Trafalgar Entertainment, they are using their expertise to build a more inclusive empire with theatre as its foundation. They have taken over Stagecoach Performing Arts, a franchise operation which teaches children and teenagers how to sing, dance and act; they have set up a broadcast business which films theatre productions and shows them predominantly in cinemas; they have one of the largest ticketing agents in the capital, London Theatre Direct; and in the autumn they will open the Theatre Royal Sydney in Australia.

Rosemary Anne Squire was born on 27 May 1956. She grew up in Gedling which at the time was a pit village. She went to a state school, Priory Junior in Gedling, before moving to Nottingham Girls’ High School.

“I suppose I was really fortunate that I got introduced to theatre because my mother liked it and took me to the Playhouse.

“For my 13th birthday she took me to the Royal Shakespeare Theatre in Stratford and I just loved it.”

In the late 1970s Rosemary studied at Southampton University, gaining a first-class degree in Spanish with Catalan and French. She also took the opportunity to gain more theatre experience. 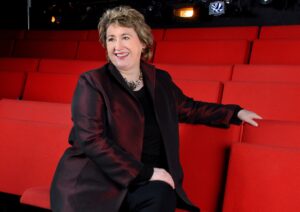 “I tore tickets at the Nuffield Theatre which was on the campus at Southampton. I also had a paid job at the box office at what’s now the Mayflower Theatre.”

After taking a postgraduate scholarship at Brown University in Providence, Rhode Island in the United States, Rosemary returned to England and knew she wanted to work in London.

“I walked around box offices and stage doors at theatres to see if they wanted any staff. I got a job within a few days.”

Wyndhams Theatre Group which had four theatres took her on. She worked in the accounts office in the mornings and in the evenings deputised for theatre managers on their night off.

She stayed there for eight years, moving up to become general manager on the production side.

“I had a very enlightened boss who knew that I wanted to produce as well as operate theatre buildings. He said: ‘You can use my phone and photocopier as long as you give me first dibs on any shows.’

“I really cut my teeth during those eight years and then I left to work with Howard at his company as general manager on his productions.”

Rosemary and Howard then set up the Ambassadors. It became the largest theatre group in the UK with more than 40 theatres. The couple topped a list of the most influential names in the industry, drawn up by the entertainment business newspaper The Stage, for a record seven consecutive years.

“I think the experience of sitting in a theatre in a darkened space listening to somebody telling a story is in our DNA.”

Now they are preparing for the end of lockdown – “it looks like there’s light at the end of the tunnel,” says Rosemary – by planning theatre tours and reopening their refurbished Trafalgar Theatre in the West End with a new production of the musical about the Four Seasons, Jersey Boys.

Rosemary says the past year has been very challenging: “We all miss it terribly. You work in theatre because you want to be part of a team. Much as we’ve all got used to it, working on Microsoft Teams or on Zoom isn’t the same.

“I think the experience of sitting in a theatre in a darkened space listening to somebody telling a story is in our DNA. We’ve sat around a camp fire in the caves listening to stories for millennia and I think that’s part of what makes us human.”

She says there is evidence that theatre will bounce back strongly: “There’s real pent-up demand and advanced sales for our productions are really strong.

“People want to have the best seat because they want the best experience. I think there’ll be a big surge when it all comes back.” 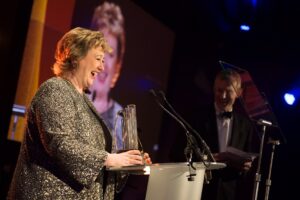 Rosemary Squire at the Entrepreneur of the Year awards in 2014

Rosemary likes to get back to Nottingham at least once or twice a year. The last time she was in the city was last autumn after it was revealed she had been chosen to receive the Girls’ Day School Trust exceptional contribution award in recognition of her work for the Trust and Nottingham Girls’ High School.

She played a huge part in developing The Squire Performing Arts Centre at the school and said it was a “great honour” to get the award.

“I’m very passionate about education for girls. I benefited from being in an all-girls environment.

“I headed up the fundraising for the arts centre and very generously they named it after me which was wonderful.”

Rosemary and Howard have a daughter Kate while Rosemary has a daughter Jenny and son Daniel from her first marriage.

Jenny has Down’s syndrome and was born with a blockage in her intestines which required surgery at Great Ormond Street Hospital.

“It was complicated surgery when she was only a few days old and there weren’t many places that could take her. But they were absolutely fantastic.

“The staff were so dedicated that I said I would do something for them when I had some time. It’s a place of hope, progress and pioneering treatment which really changes kids’ lives.”

Although Rosemary has been working in the entertainment business for more than 40 years, she intends to carry on.