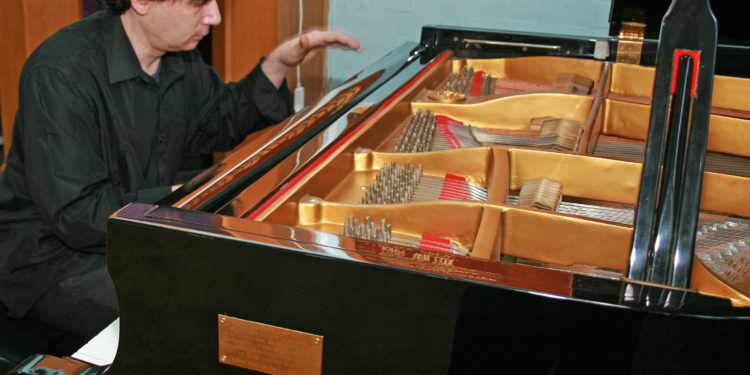 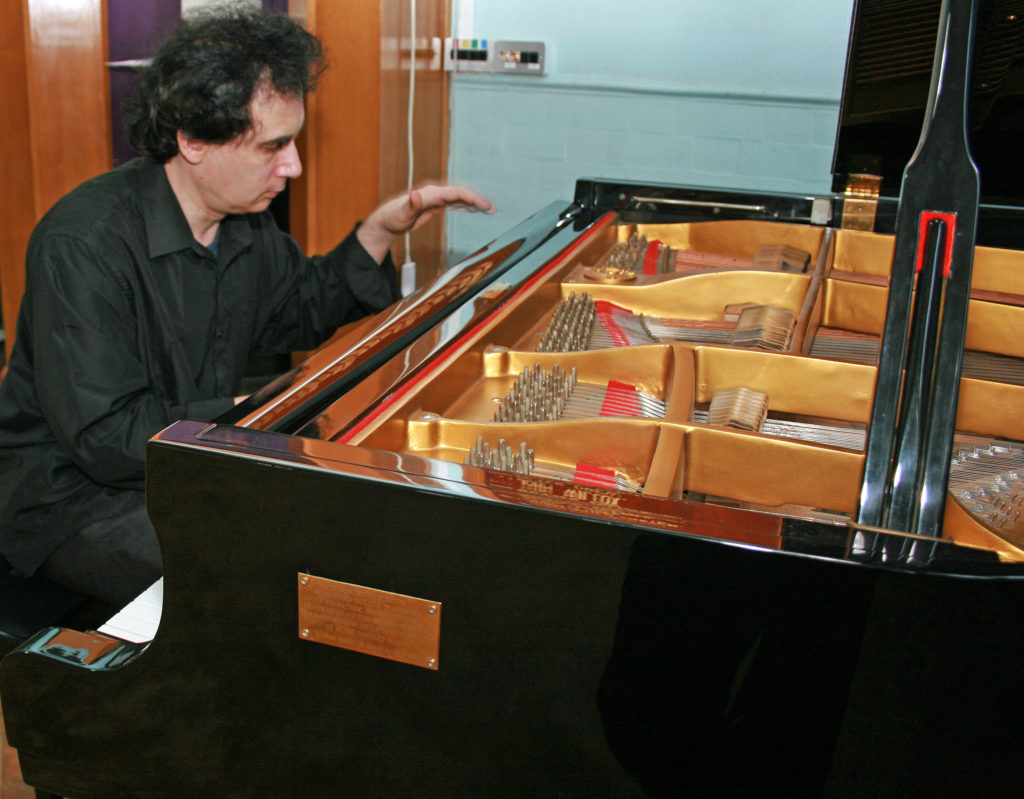 A strand of his wispy hair falls over bushy eyebrows as Sergei Podobedov, dressed in a dark T-shirt and casual trousers, makes coffee. There’s nothing unusual about his demeanour as he goes about everyday tasks without taking undue care of his hands.

But this isn’t a manual labourer or someone who’s been thrust into the uppermost echelons of celebrity without having a talent. This is a Russian-born classical pianist who’s given concerts all over the world – and he’s living in Belper.

He admits he doesn’t do any heavy lifting. Otherwise he just gets on with life, paying little attention to the dynamic digits that have catapulted him to the top of his profession. His hands aren’t even insured.

I first came across Sergei when some friends invited my wife and I to a concert he was giving last September at the Strutts Centre in Belper where he also practises. Everyone who experienced it was captivated by his dexterity, natural ability and mastery of the piano. I also wondered how someone with his virtually unparalleled talent had made his home in Derbyshire and was playing at the former Herbert Strutt School.

“I thought ‘I really like it here’ and eventually I ended up with friends who invited me to stay long-term. It’s all their fault!”

“I don’t know. It has something to do with the laws of the universe!” he told me.

“I had a studio in London but I had to move because the house was going on sale. I wanted a change. So a friend in Bonsall invited me to stay on her farm for a couple of months.

“I thought ‘I really like it here’ and eventually I ended up with friends who invited me to stay long-term. It’s all their fault!”

During our chat 46-year-old Sergei laughs a lot. He speaks confidently and eloquently. On occasions he takes his time answering questions but that’s not because he has problems with the language; he’s thinking deeply about what he wants to say.

He’s obviously content in his new surroundings which are unlike London: “It’s really nice here. Everybody is so friendly – it’s a different world.” 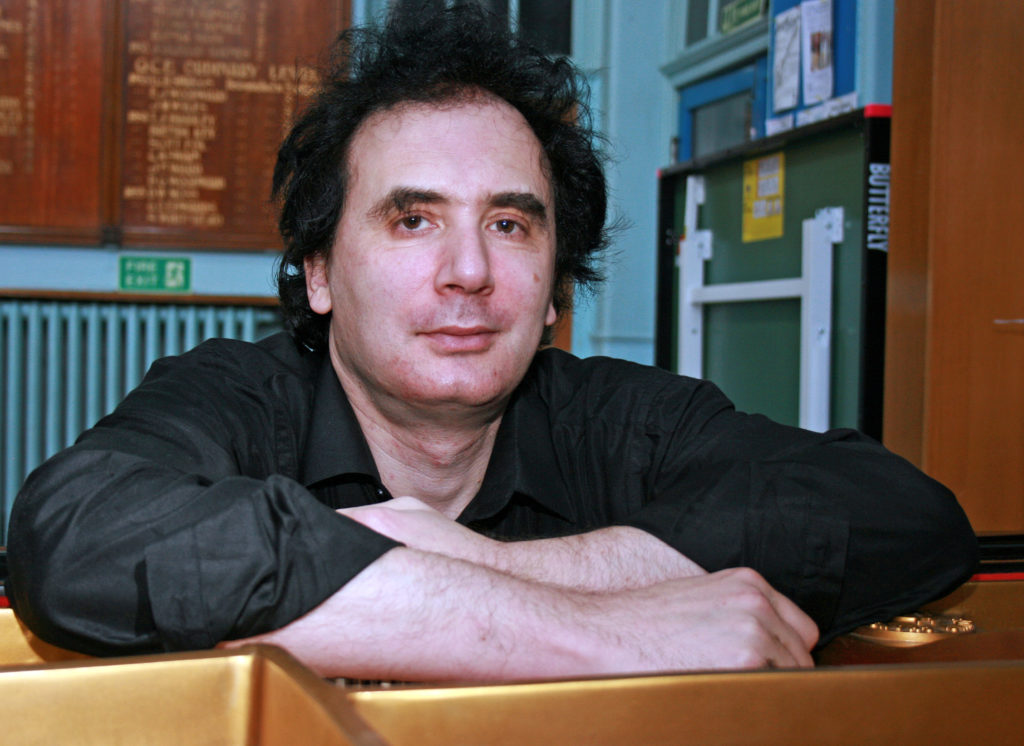 When he was in the capital he enjoyed practising at night. He can do the same in Belper. But if you drive past the Strutts Centre in the early hours, don’t expect to see lights on in the building when he’s playing his piano – he likes to practise in the dark.

“If you see lights it’s probably because someone forgot to switch them off! Or it’s ghosts. They say this place is haunted. But to me the atmosphere in this building is very positive, so if it’s haunted it’s haunted by good people.”

He says those who attended last September’s concert were “fantastic”. They were “a very warm audience and I feel that I’m somehow useful to the community, which for me is important.”

The programme included Beethoven’s Piano Sonata No 14, the “Moonlight” Sonata, as well as Schumann and Chopin. He maintains that he tries to practise “as efficiently as possible” and doesn’t want to do too much.

But he confesses he had to work hard on the Chopin Mazurka that he played for an encore.

“I think (my mother) was a bit apprehensive when I was near the violin because she always said it’s torture for a child to start playing it.”

“It’s a very short piece, it’s very simple. But basically I practised the last two lines for a whole night. I sat down around one o’clock in the morning and by the time I felt that I owned those last two lines, I think it was around nine. But then once you’ve done that you own the piece.”

Sergei Podobedov was born in 1972, growing up in Moscow and spending three summer months in a Black Sea resort. He started playing the piano when he was five or six.

“My mother was a first violin in one of the major orchestras in the Soviet Union. I grew up in an orchestra because she took me to all the rehearsals and concerts. And I listened to a lot of records when I was a kid.

“I was fond of every possible instrument. I think she was a bit apprehensive when I was near the violin because she always said it’s torture for a child to start playing it.”

He chuckles loudly before explaining what drew him to the piano. “I went to a concert where my mother’s orchestra was playing. There was Tchaikovsky’s Piano Concerto No 1 on the programme and I came back home and started listening to it obsessively. 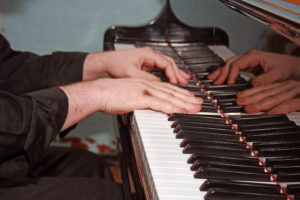 “My uncle came for my birthday and he brought a recording of the concerto by Emil Gilels (regarded as one of the greatest pianists of the 20th century). He told me ‘this is better than the pianist you are listening to’.

“I listened to it and I didn’t like it at first. But after listening to it a few times I thought ‘it is better!’ Gilels has amazing sound which was uniquely his own. In terms of musical breath it was completely different. Other recordings weren’t so alive.

“Since then I’ve heard many recordings of the concerto. Some of them are great but there’s still nothing like Gilels. I guess you can’t really explain it but it will always remain something very special.”

Six years later, in 1990, he came to London to study at the Royal College of Music which he describes as a “great experience”. He and another pianist were the first two Russians ever to study at the College.

Its patron was the Queen Mother who that year celebrated her 90th birthday. Sergei played for her and was invited back the following year to do a joint concert with Sir John Gielgud who read poetry. It’s another event which Sergei remembers as being “very special”.

Since then Sergei has played all over the world including the United States, Paris and, surprisingly, Turkey where he says audiences for classical music are “amazing”. 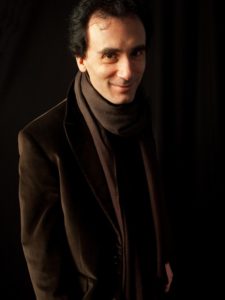 He has performed at London’s Wigmore Hall, the Tchaikovsky Hall in Russia and Herbst Theater in San Francisco, among others, so does he get nervous?

“It depends what you call nervous. It’s a feeling that you have to do something but you want to do it. Generally in life sometimes I get too focused; I can get too focused on one thing in particular which might not necessarily matter. But when there’s a concert coming up I have to not be like that which makes me happy also. So overall it’s a positive experience!”

Sergei has a few things which he says are “amazing” that are lined up for the future. They include The Voice and The Hands, a Belper Arts Festival event at St Peter’s Church, Belper with Irish classical crossover soprano Margaret Keys on 9 May.

He also has dates coming up at Haddon Hall on 2 June and the Crooked Spire, Chesterfield on 7 June.

“I have to say that for the moment I’m doing what I want to be doing as far as performing is concerned,” says Sergei whose repertoire has included improvised solo recitals and playing a lot of jazz which is “a great art form”.

He also returns to London every couple of weeks to give private tuition and he may develop this in the future.

“I find myself thinking more and more about helping other young musicians with my experience. So maybe at some point I will take up a class at a conservatory somewhere. For the moment, if I’m playing, then I’m happy.”

Anyone who has seen Sergei Podobedov playing in Belper will be happy too that this incredibly talented individual swopped the metropolis of Moscow for the delights of Derbyshire.