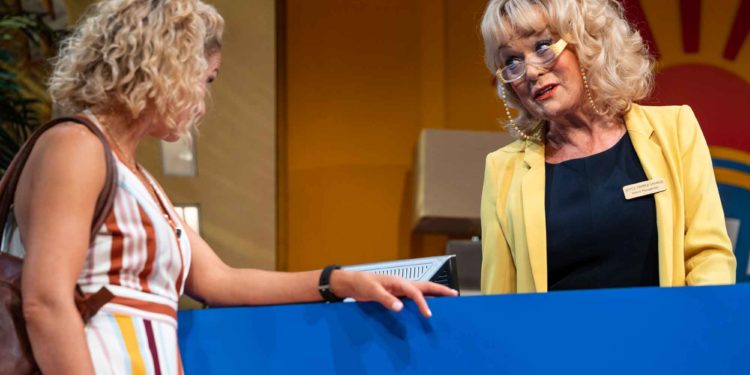 Sherrie Hewson is feeling a little bit emotional. The Nottinghamshire-born actress is delighted to be returning to Nottingham’s Theatre Royal in a show that has provoked a “wild” reaction from audiences. But she’s also sad to be saying goodbye to a character she’s become synonymous with as well as a group of actors who she regards as family.

Sherrie has been on tour for the past six months in the stage show of the television series Benidorm. She plays hotel manager Joyce Temple-Savage, a “wonderful” part which writer Derren Litten penned with Sherrie in mind.

But there’ll be no more Benidorm on TV. Although Litten is writing a film featuring all the usual Solana Hotel guests and staff, the stage show gives the cast the opportunity to say farewell to the fans who’ve helped it to win a BAFTA for best situation comedy as well as other national television awards.

Speaking from Dartford during a stop-off on the tour, Sherrie explained how fantastic it is to hear people laughing at the show, what she’d like to appear in next and why the Mayor of Nottingham wasn’t happy with her the last time she performed in the city.

She says the response from audiences at Benidorm Live has been “phenomenal”.

“The producers have said they’ve never seen anything like it because audiences are standing and screaming. In all my hundreds of years in this business I’ve never seen a reaction like it. When each one of us comes out the audience goes wild. At the end they’re up on their feet screaming. It’s just extraordinary.

“I said to the boys (in the show) ‘you’ll never see this again in your lifetime’. It’s the love of the ten years of the show and love of the characters.”

Sherrie points out that some of the people who’ve seen the live show have never watched the television programme. One family in Dartford said they had never laughed so much in their lives and booked to see the show again later in the week.

Benidorm Live starts where the last television programme finished, with a hotel chain trying to take over the Solana.

Sherrie says the difference between the television series and the stage show is that the actors can hear laughter.

“Joyce Temple-Savage will stay with me forever and Derren wrote the part with me in mind, which is a wonderful thing to happen to an actor. “

“Usually we’ve only got a crew watching us who want to go for lunch.”

She joined the television series at the start of series five in 2012.

“It was amazing from day one. Joyce Temple-Savage will stay with me forever and Derren wrote the part with me in mind, which is a wonderful thing to happen to an actor. When I first read the script I could actually hear my voice. So that’s how wonderful it was and still is.

“I will miss playing her because I love her quirkiness and everything about her. You put a lot of yourself into something. So when Benidorm goes, part of you goes. We’ve invested a lot of our lives in the show. That will be the sadness.”

Sherrie Lynn Hutchinson was born on 17 September 1950 in Burton Joyce. She first trod the boards when she was four.

“My mother used to model at the Theatre Royal. I was a little girl in a big dress with white socks and white sandals and I used to walk behind her.”

As a child she performed at Nottingham Arts Theatre with Su Pollard in Whistle Down The Wind. She trained as a ballet dancer in Nottingham along with Janine Duvitski who plays Jacqueline in Benidorm.

After going to the Royal Academy of Dramatic Art, Sherrie’s career took off with television appearances in Z Cars and the prison drama Within These Walls.

In 1975 she was cast in Carry On Behind and her talent for comedy led to her being invited to join Russ Abbot’s Madhouse where she was an integral part of the team for more than ten years.

More recently she has become known as accident-prone supermarket assistant Maureen Webster in Coronation Street, Lesley Meredith in Emmerdale and as a panellist on the ITV lunchtime show Loose Women for 13 years.

Now she is returning to the Theatre Royal where she last appeared in 2017 as Mrs Potts in Beauty And The Beast.

“Benidorm is quintessentially British, it’s everything the Carry Ons were and it’s postcard British comedy which everybody loves.”

She tries to get back to Nottingham as often as she can to see family which includes Nottingham Forest legend Garry Birtles who is her cousin.

But she’s not a fan of how the city is changing. “I hate it that Nottingham has been messed about architecturally. When I did panto there I said to the Mayor ‘will you please leave Nottingham alone! We want the old Nottingham, not what you’re doing’. I don’t think he was very happy with me.”

Back to Benidorm and Sherrie believes it’s so popular because it has replaced the Carry On films.

“Benidorm is quintessentially British, it’s everything the Carry Ons were and it’s postcard British comedy which everybody loves. Every time I hear the music it makes me smile.

“It’s quite near the knuckle sometimes in exactly the same way a pantomime is. But you could never take offence at Benidorm.”

How much of Sherrie is in the character of Joyce Temple-Savage?

“Well, she’s a kind of heightened version of me really. She’s a victim, she’s quite sad, she’s a strong woman with a big work ethic, like I have.

“I like her because she’s a survivor. Whatever you throw at her she’ll get up for another day and fight. I think she’s quite lonely and I feel sorry for her sometimes. But she’s her own worst enemy too because she’s too strong, been on her own too long and will fight her corner rather than back down.

“I guess that’s part of me and the reason I survive in life – I’ve had knocks but I always kick them out of the way and get up and fight another day.”

Those knocks include being divorced from her husband after he admitted having an affair. But she has bounced back and when she’s not working loves to spend time with her grandchildren.

“As they always say, one door shuts and hopefully another very large door opens.”

Her daughter Keeley has a son, 12-year-old Oliver, and a daughter, Molly who is eight. She will shortly give birth to Sherrie’s third grandchild. Sherrie is hoping to spend more time with them when she takes a break after the Benidorm tour.

After that she will be doing the Benidorm film and she would like to do a drama series. “I’d like to do Call The Midwife. The other series I like is Doc Martin. I love Martin Clunes. So I’d like to be involved in those two series.

“There are a few things in the pipeline but I don’t think there’s any point in saying anything until you’ve signed on the dotted line.”

It seems fairly evident that Sherrie won’t be sitting at home waiting for the phone to ring. She’s more likely to be struggling to fit everything in or taking her pick of several jobs that she’ll be offered.

Whatever happens, Sherrie remains philosophical: “You never know what’s coming in our business. As they always say, one door shuts and hopefully another very large door opens.”

Rugeley Poisoner tale to be told on ...