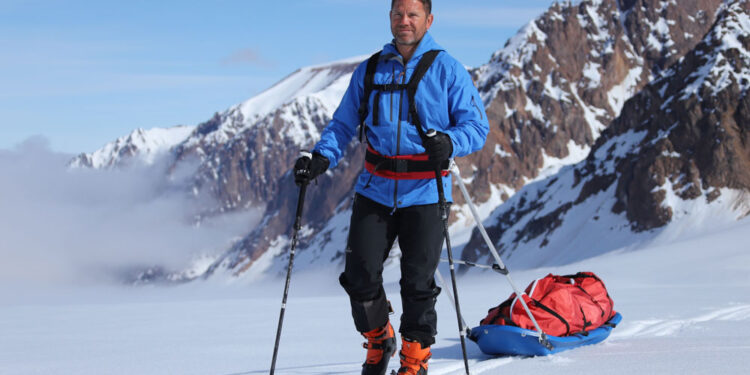 Explorer, naturalist, television presenter and writer Steve Backshall has dived with sharks, been hunted by a polar bear and gone on expeditions to parts of the globe that have never been explored before. So what is he afraid of?

His answer may shock you: “I’m afraid of people. I think we’re far more frightening than any animal could ever be.”

Taking time off from preparing for his new show Ocean which is touring to both Buxton Opera House and the Royal Concert Hall in Nottingham, Steve explains that he’s not afraid of any animal. This is despite being bitten on the leg by a caiman while searching for anaconda in an Argentinian swamp.

“I’ve been working with animals long enough to know what I have to do to stay safe. As long as I keep to my own rules, then things tend to work.”

Some of the animals he has encountered in his career will be on stage with him when he presents the show Ocean. The audience need not be worried – they will be life-sized replicas. 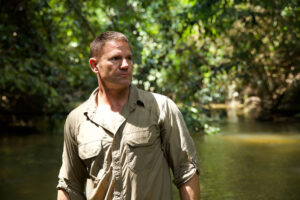 “What I’m trying to do,” says Steve, “is bring marine environments and more importantly marine animals to life on the stage inside the theatre.

“That will be some of the very biggest creatures ever known to have lived, some of the most iconic animals that we have on our planet, many of which we know next to nothing about.

“I’ll be using life-sized replicas and some of them simply won’t get into theatres. I don’t think that’ll be a problem in Buxton or Nottingham because they’re good-sized theatres. But it certainly will be in some of the venues.”

Steve is compiling his first tour for five years, finding clips of some of the shows he has done over the past 25 years, editing them together and sourcing the props he needs for his show.

He will be doing 34 shows in five weeks, a schedule which he describes as “insane”.

“It’s going to be really hard. At the same time it’s exciting because for me, doing stuff on camera you’re quite removed from the audience and you can get caught up telling the tale you want to tell rather than the one the audience wants to hear.

“Having that immediacy of reaction that you get on a tour is so important to someone like me and you get so much back, particularly from the younger members of the audience.

“Being able to see people who are already filled with passion about wildlife, about conservation is massive.” 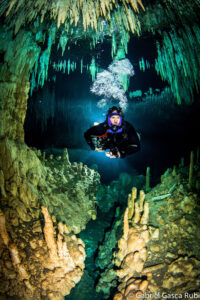 Steve is grateful that he is able to perform live as well as undertaking television work.

“I wouldn’t just want to do touring – it’s very exhausting and you’re too exposed: just one person up on stage and there are so many things that can go wrong.

“I enjoy television. It’s something I can really get energised by. There’s always something new every single day. You just don’t know what’s going to happen next and I find that absolutely thrilling.”

Stephen James Backshall was born on 21 April 1973. His parents worked for British Airways and he was brought up on a smallholding in Bagshot, Surrey where he was surrounded by rescue animals.

After reading English and theatre studies at the University of Exeter, Steve studied martial arts in Japan, earning a black belt. Then his life changed completely. He had an idea for a television series, bought a video camera and went off to film what was happening in the jungle in Colombia.

“It seems crazy now,” says Steve, “but that’s exactly what I did. I was very lucky in that I made the right contacts at National Geographic and the video that I made ended up forming the basis of a series. It properly chucked me in at the deep end.

“My early efforts (with a video camera) were I’m sure pretty rubbish but they were real. It probably captured the imagination because it was authentic.”

It led to National Geographic taking Steve on as “adventurer in residence” and he worked for the channel for five years.

“Basically they gave me the company credit card and said ‘go off and film what you do’. It was a baptism of fire to say the least.”

He moved to the BBC’s The Really Wild Show in 2003 and then came the series Deadly 60. He searched for predators that were “not just deadly to me but deadly in their own world”. The programmes were sold to 157 countries. 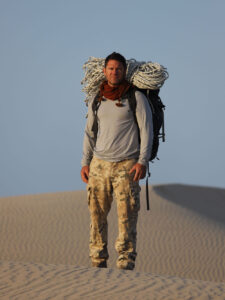 Deadly 60 won a BAFTA award for best factual series in 2011 and Steve picked up the BAFTA for best children’s television presenter.

In 2018 he started a project called Expedition which involved his taking on extreme physical challenges and encountering extraordinary wildlife in pursuit of new discoveries and world firsts.

So what is he most proud of?

“That’s a tricky one. There’s been so many things. The Expedition films went to places that people had never been to before. We made the first ever ascent of arctic mountains, the first descent of Himalayan rivers, discovered 50,000-year-old human art in forgotten caves in Borneo.

“Those sorts of things are always massively high up the list of things that make me really proud.”

Steve lives close to the river Thames on the border of Berkshire and Buckinghamshire with his wife, Olympic champion rower Helen Glover and their three children.

During lockdown the Backshalls were able to take advantage of their surroundings: “We took a lot of time to find ways of giving our youngsters their first experiences of the outdoors right on our doorstep.”

Steve who early in his career wrote for the Rough Guides publishers maintains that his first love is writing. He has put his name to a number of wildlife books, some of them linked to the Deadly 60 and Expedition series, and he has also written four novels which feature “action, adventure, predators and peril”.

He is now working on a book with Helen aimed at parents and encouraging them to take their children outdoors. He is also producing a book called Ocean which, says Steve, “unfortunately” will not be out in time for the tour. 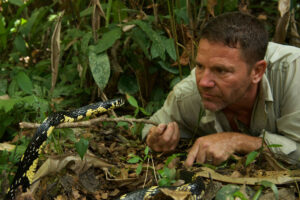 His biggest ambition is to do things with his family: “Going off on expeditions with Helen and the kids I think would be my absolute dream.”

Obviously Steve thinks it is important for children to become adventurous and get involved in wildlife from an early age.

“We need young people who are inspired and are going to become advocates for wildlife in the future. We need nature and nature needs us.”

He fears for the planet “but I’m given great heart by the fact that there are so many young people out there who are willing to make the planet’s problems their own and are willing to try to do something about it.

“We stand at the crest of a wave of young people who are so charged with enthusiasm, so desperate to make a big difference. And more power to them, I say.

“The conservation conversation starts at a very young age. Kids are all switched on to the problem of the planet much earlier than anyone of my generation ever was. And that has to be a good thing.

“We’re plugging away at getting a natural history GCSE on the curriculum and that looks very likely to happen.” 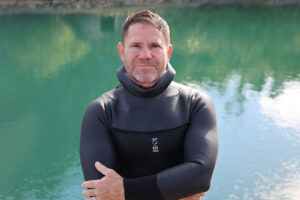 There are few people as passionate or as dedicated to their work as Steve. His quest for discovery will mean he will be on the small screen for some time yet.

He has just finished a series on sharks for Sky Nature and after the tour will start filming two new projects on marine animals.

“I’ve got lots that I still want to do, places that I want to go and so I think there’s a few good years in me yet.”

THE RISE AND FALL OF LITTLE VOICE