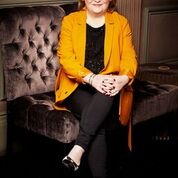 She was the middle-aged, Scottish cat lady in sensible shoes who broke every rule in the reality television rulebook. Susan Boyle’s performance on Britain’s Got Talent came as a complete shock to a culture obsessed with physical attractiveness and presentation.

More than ten years on from her unforgettable rendition of I Dreamed A Dream from the musical Les Misérables, Susan is heading out on tour to do what she loves most of all: singing to an audience.

When she stepped onto the Britain’s Got Talent stage, few people could have imagined the impact she would have. It would change her life.

Despite finishing second in the final to dance troupe Diversity on the show watched by 17.3 million viewers, Susan went on to have unparalleled success. Her first album I Dreamed A Dream is the fastest-selling UK debut album of all time. She became the oldest female to reach number one on the UK albums chart with her second offering The Gift. Only three acts have topped both the UK and the US charts twice in the same year. Susan is one of them.

All this from a woman who was bullied at school and was brought up thinking she had a learning disability. It was only after she had become a household name that she was told she had been misdiagnosed: she had Asperger’s syndrome and an above-average IQ.

Before I spoke to Susan about coming to Nottingham on her latest tour, her publicist told me that Susan doesn’t like structured interviews and I should regard our conversation as a casual chat.

Susan, who was born in Blackburn, West Lothian, has a pronounced Scottish accent. It can be a bit difficult to understand but after a while she comes over as gentle, caring and unruffled by anything the music world can throw at her.

So what will she be singing on the tour? 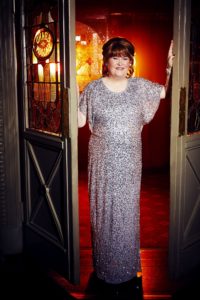 “There’ll be a mixture of songs from the latest album and a lot of new stuff. It won’t be as classic as last time – it’ll be more informal. There’ll be songs to get people up and dancing in the aisles. It’s fun!”

Naturally she will sing I Dreamed A Dream: “It’s my signature tune. I have to include that. That’s what it’s all about and how I got there in the first place. People expect it.”

Susan Magdalane Boyle was born on 1st April 1961. Her father was a miner and a singer while her mother was a shorthand typist.

Her mother urged her to enter Britain’s Got Talent. She almost abandoned the plan because she thought she was too old. So did she ever think she would get through?

“I didn’t think anything, to be honest. I just went on and had some fun.”

Was she nervous? “Who wouldn’t be? It’s such a big event. In front of Simon Cowell who can be quite strict with you. Of course I was nervous but you get over it.”

When she said her wish was to become as famous as the British singer, actress and presenter Elaine Paige, Simon Cowell smirked. But he was stunned when he heard her sing. One American news organisation described her as “the woman who shut up Simon Cowell”.

She says: “When they saw me step out on stage, people thought I was going to be awful. I proved them wrong. You don’t judge a book by its cover.”

Can she believe it is ten years since her first appearance on the reality TV show? 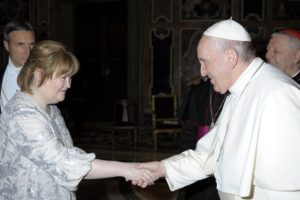 “One day you’re sitting in a room with your cat not doing anything, the next you’re on stage and in a competition. It was a complete turnaround. Ten years – I can’t believe it’s gone by.”

Within nine days of her first appearance on Britain’s Got Talent, the video of I Dreamed A Dream was viewed 103 million times on 20 different websites.

Newspapers around the world including China, Brazil and the Middle East carried articles about her performance. She was interviewed via satellite by several US television stations.

Simon Cowell signed Susan to his recording label and controls much of her output. She pays tribute to the man derided by so many people.

“Simon was very supportive and very kind. I can’t say a bad word about him.”

Susan’s eighth studio album called Ten – marking a decade in the business – was released last May and another one will follow after the tour.

“Being in a recording studio is peaceful. It’s a kind of different world,” she said. 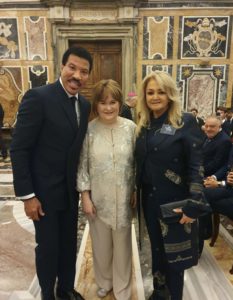 “I’ve been entrusted to do another album with Simon himself. The whole album’s being discussed at the moment. It’ll be full of surprises.

It’s really exciting and I hope to go on from there. I don’t stop, you know!”

So far Susan has sold more than 25 million albums, performed to half a billion people on the final of China’s Got Talent, written her autobiography and had cameo roles in a couple of films.

In 2012 Susan performed at Windsor Castle for the Queen’s diamond jubilee pageant, singing Paul McCartney’s Mull of Kintyre. Last year she met the Pope at the Vatican in Rome. Susan, Lionel Richie and Bonnie Tyler all sang at an annual Christmas concert there, raising money for the Amazon rainforest.

A practising Roman Catholic, Susan was overawed by the experience: “The Pope’s a very family-oriented man. Indescribable, the feeling really. Very close to God himself.”

She appears to take everything in her stride and believes it’s because when she went on Britain’s Got Talent she was more mature than many of the contestants who go onto TV reality shows.

“When you’re young you’re more fazed than when you get to a certain age – you become more relaxed. I’m living the dream! I’ve enjoyed every second of it.”

There are some people whose musical tastes might not include the kind of music that Susan Boyle sings so well. But few people can begrudge her the success she’s earned by being different.