Tara Fitzgerald in Prism: benefiting from a “revolution”

She’s recognisable for her roles on the big screen in Brassed Off and on television in Waking The Dead and Game Of Thrones. Now Tara Fitzgerald is teaming up with Derbyshire-born actor Robert Lindsay for one of the theatrical highlights of the year which is coming to Nottingham.

Lindsay is reprising the part of Jack Cardiff, “the man who made women beautiful”, in Terry Johnson’s play Prism. Tara plays two roles, Cardiff’s wife Nicola as well as Katharine Hepburn, the Hollywood star who worked with the legendary director and cinematographer.

The play features Cardiff who is suffering from dementia looking back over his life and the films he’s made.

When I spoke to Tara during the early stages of rehearsals for Prism, she was still examining her two characters and how they fit into the play. But she was quick to praise playwright Terry Johnson who also directs Prism.

“Terry’s writing is fantastic and very exciting to work with. It has a sort of visceral quality and it’s funny, as Terry’s work often is. If we do it right it will also have real pathos. But Terry never becomes sentimental. He’s a very fine wordsmith.” 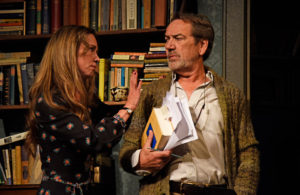 Tara Fizgerald and Robert Lindsay in In Praise Of Love at the Theatre Royal, Bath (image: Nobby Clark)

Tara whose deep voice is mellifluous as well as unmistakeable says she is already loving the play: “It’s a real treat to be able to play two characters. Terry’s writing is so beautiful you want to honour it.”

She is also relishing the opportunity to team up with Robert Lindsay again. They both appeared in the Terence Rattigan play In Praise Of Love at the Theatre Royal, Bath last year. It was directed by Jonathan Church, formerly associate director at Derby Playhouse and assistant director of Nottingham Playhouse in the 1990s. Tara says it’s a “real pleasure” to be working with Lindsay.

Tara Anne Cassandra Fitzgerald was born on 18 September 1967 in Cuckfield, Sussex. She came to international attention in 1993 when she starred with Hugh Grant in the Australian comedy Sirens.

She appeared in a stream of independent films during the 1990s, most famously Brassed Off in 1996 alongside the late Pete Postlethwaite. She played Gloria Mullins, a young woman working for British Coal who’s sent to her home town of Grimley to determine the profitability of its pit.

“People talk about it as being one of their favourite films,” remarks Tara. “It still has so much relevance, as I suppose the best pieces of art do. Everyone believed in it. It wears its heart on its sleeve, so it chimes with people.”

The previous year Tara had won the New York Critics’ Circle best supporting actress award for her role as Ophelia in Shakespeare’s Hamlet opposite Ralph Fiennes.

On television she appeared in 32 episodes of the BBC1 series Waking The Dead as forensic scientist Eve Lockhart and also in the spin-off drama The Body Farm.

“(Game of Thrones) was something I can feel so proud of.”

If you’re a fan of the TV fantasy drama series Game Of Thrones you won’t need me to tell you that Tara played Queen Selyse Baratheon, wife of the Lord of Dragonstone and claimant to the Iron Throne. The character killed her daughter before hanging herself.

Tara considers herself lucky to be able to move between the different media of theatre, film and television. She found Game Of Thrones to be “phenomenal” because she was a fan of the series when she got the role.

“I was just over the moon. There was such talent everywhere you looked, both the cast and crew. It was a great thing to be part of and something I can feel so proud of. Even if you haven’t seen Games Of Thrones you know it. And you know culturally the impact it’s had globally. This sounds a bit grandiose but I think it was the start of a television revolution.”

There’s also been a revolution in theatre, with actors being cast in roles no matter what their gender, race or age. Tara feels she has benefited from this change.

“It feels like people are just much more open-minded. It’s a time of reinvention. People are looking at projects with fresh eyes, which is great. 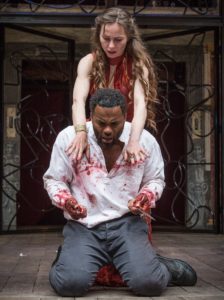 Tara with Ray Fearon as Macbeth at Shakespeare’s Globe

“There’s just been this zeitgeist,” observes Tara, an intellectual who thinks carefully about everything she says. “The change has been so swift and so huge. But I still miss in film – not so much on TV – representation of women of a certain age, women who are my age basically.”

Tara has recently been working on a major ITV period drama, Belgravia, written by Downton Abbey creator Julian Fellowes. “That had the most wonderful roles for older women who are the drivers of the story.”

Tara had at one point become frustrated at a lack of interesting roles for mature actresses and had started to direct. Yet she has had a range of major parts in the past few years including playing Lady Macbeth at Shakespeare’s Globe and Bella Manningham in Patrick Hamilton’s Victorian chiller Gaslight in Northampton.

She found acting at the open-air Globe in London “extraordinary” because “the main house isn’t like anywhere else. For me it was a big learning curve, the immediacy of the space and the interaction that you inevitably have with the audience.

“Usually when I go out onto a stage there’s some sort of a wall. They call it the fourth wall. And so you’re enclosed in your make-believe land. At the Globe you’re not. You come out on stage and you can see every face in the house. People are very active and alive and going about their business.

“That was very different and it became something that I really enjoyed. But I had to learn that because I hadn’t experienced it before. It felt like a very exciting time.”

Directing is something she wants to pursue in the future. She recently won an award for her second short film, a modern-day psychological horror story Nothing Important, which was declared best narrative at the New Renaissance Film Festival.

Next year she’s hoping to get her first feature film, Amsterdam, completed: “It’s a long process and again things have changed very much because cinemas’ patronage has altered quite a lot.

“Big companies like Netflix come in and you have simultaneous releases and streaming. It’s all changing. I think everyone now is beginning to get their heads around what that means and then to utilise those possibilities.”

“There are other theatre things that might come to fruition next year but I’m not committed to anything once this run ends.”

No matter how much work she gets, Tara admits she always gets nervous: “It’s always been the same as far back as I can remember. Excitement and the desire for something to be good are the drivers and inevitably make me nervous.

“As long as I stay nervous I’m fine. Anxiety isn’t welcome. You’ve just got to keep re-examining things and keep on trying to unearth inspiration.”

After the tour of Prism finishes at the end of November, Tara doesn’t know what she’ll be doing.

“There are other theatre things that might come to fruition next year but I’m not committed to anything once this run ends.

“I like not knowing. I’ve been so fortunate and I’m aware that I’m lucky in being able to work.”

Go to see Prism and you’ll surely see the light as to why Tara Fitzgerald is such an illuminating actor.

Prism is at the Theatre Royal, Nottingham from 21 until 26 October 2019

And Then There Were None trailer