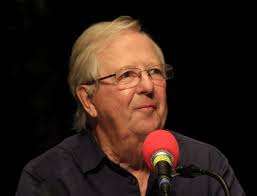 Comedian and actor Tim Brooke-Taylor has died of coronavirus at the age of 79. Here is an article I wrote in 2013.

In these days of instant stardom, when people are thrust into the limelight only to disappear after their 15 minutes of fame, it’s gratifying to know that there’s still a place for genuine talent.

At the age of 72 Buxton-born Tim Brooke-Taylor has a new television show, is part of one of the longest-running panel games on radio and is still fondly remembered as one third of a comedy powerhouse which was last on mainstream television 30 years ago.

On top of that he is a true ambassador for both Derbyshire and Buxton, promoting their attractions and attractiveness at every opportunity.

Tim’s latest TV show Animal Antics, a send-up of news stories which has unfairly been described as the BBC’s answer to You’ve Been Framed, is due to end on the second Saturday in February. The producers said they had chosen Tim to present the show because of his “gravitas”.

“I said does that mean I’m older?” says Tim who admits he still does not know what his gravitas is.

He explains that the whole point of Animal Antics is not to make it like You’ve Been Framed.

“There’s no doubt about it, there are clips of animals doing silly things. But we want to make it slightly different. It’s a very serious news format and we take it very seriously,” says Tim with his tongue very firmly in his cheek. 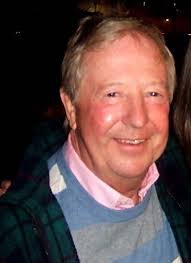 The show features Tim and a dog called Sparky, played by Matthew Crosby, presenting funny clips. Tim obviously does not take notice of the old show-business adage about never working with children and animals.

“Sparky I’m afraid to say is a little bit prejudiced – he thinks all cats are very stupid, which I don’t think the BBC should allow.

“The show was originally called Newshound which was rather a good name but the BBC were worried that people might think it was actually a news programme,” says Tim.

Timothy Julian Brooke-Taylor OBE was born in Buxton in 1940. While he was at Cambridge University he performed in comedy sketches and became president of the Footlights theatrical club.

He soon gained work as both a writer and performer on radio and television. Series such as I’m Sorry I’ll Read That Again, At Last The 1948 Show and The Goodies teamed him with the likes of John Cleese, Graham Chapman, Marty Feldman, Graeme Garden and Bill Oddie.

He was one of the original members of I’m Sorry I Haven’t A Clue which was Garden’s idea and was an offshoot of the sketch show I’m Sorry I’ll Read That Again.

“He’d heard another quiz programme which was absolute rubbish, so he said we could take some of the sketch show and ad lib,” Tim points out.

“We did a pilot and we all thought it was total rubbish. I can remember Humphrey Lyttelton (jazz musician and chairman of ‘Clue’) saying never again and I said I agree with you – never ever again. And then we did it every year for the next 40 years.”

So why does Tim think ‘Clue’ has been so successful?

“We’re not trying to outdo each other. We’re all trying to keep the balls in the air, basically – we’re not fighting each other.”

“One of the big plusses is that we’ve got a very good producer who we still call young John (Naismith) although he’s been with us 25 years. He makes us come up with new ideas.

“We have a meeting before each series and he says ‘look, we need new ideas, we can’t just rest on old ones.’ We have some favourites which we always do but we try to get new stuff in every series.

“I think the other thing is we’re not trying to outdo each other. We’re all trying to keep the balls in the air, basically – we’re not fighting each other.”

When I interviewed Barry Cryer (Country Images, August 2012) he compared the ‘Clue’ team to an old rock band. Tim agrees.

“The point I make about always trying to do new stuff is very important. There’s a danger that you can rest on your laurels. That’s the beauty of music – you can do the same song thousands of times. Unfortunately you can’t do that with jokes.” 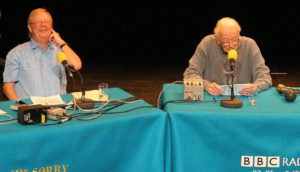 There also seems to be a resurgence of interest in The Goodies, the television show which ran for 12 years and was nominated for a BAFTA award for best light entertainment programme, only to lose out to Fawlty Towers.

Tim is pleased that so many people still fondly remember the show which led to Brooke-Taylor, Garden and Oddie appearing on Top Of The Pops singing The Funky Gibbon which got to number four in the chart.

“It always surprises me that the BBC don’t repeat it (The Goodies). We’ve done three tours to Australia where they’ve gone on showing it and the great thing is it attracts all ages, which is extraordinary really because quite a lot of it is topical.

“Some of the episodes are a bit dated and some of them actually are slightly better than I remember.”

Such is the interest that last month Tim appeared in The Lost Goodies at the Slapstick comedy festival in Bristol.

“Funnily enough one of my two sons who lives in Brighton gets his television through Virgin and they’re showing the first series of The Goodies at the moment. That seems fairly bizarre because (a) there’s no publicity and (b) we knew nothing about it.

“The BBC did some repeats about two years ago at Christmas at half past 12 at night. And they actually got good viewing figures for that time of day. I think they were trying to test whether they were popular or not and they probably said ‘oh, they only got three-quarters of a million’. Well, at half past 12 that’s not bad.” 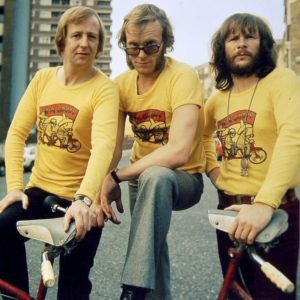 Tim (left) with Graeme Garden and Bill Oddie in The Goodies

Tim concurs with my comment that it’s strange a channel such as UK Gold has not picked up The Goodies.

“An independent company brought out DVDs and they’ve sold incredibly well. They’ve been digitally remastered so they actually look better than they ever did.”

Now Berkshire residents Tim and his wife Christine who have been married for 44 years – her father was a housemaster at Repton School – try to get back to Derbyshire once a year. It usually coincides with a trip to the Tiny Tim Trust, a charity which provides equipment and resources for children with special needs, of which Tim is patron.

His other interests include football – he is a former honorary vice-president of Derby County – cricket and golf. He did a television series, Golf Clubs With Tim Brooke-Taylor, for one of the satellite channels and this month is due to play in the annual Jimmy Tarbuck Golf Classic tournament in Portugal.

Tim admits he is probably looking through rose-tinted glasses but never tires of praising his birthplace.

“Buxton is not a big town but it’s self-contained. It was a perfect place to grow up. I’ve always sold Buxton because I owe it an enormous amount.”

So does the actor, writer, comedian and pop star have any ambition he would like to fulfil? He would like to do another TV comedy show,, although he admits he is not quite sure what.

“I always enjoy watching sitcoms. They’re not fashionable now but they still make me laugh more than most. It would be very hard work but it’s that feeding off the audience which I’ve always liked in comedy, both performing and watching.”

As many people in the entertainment industry will tell you, comedy is a serious business. So don’t be surprised to see a Tim Brooke-Taylor sitcom on the small screen soon – he certainly has the gravitas to pull it off.

*  This article appeared in Country Images magazine in February 2013