Tristan Gemmill: from Casualty and Corrie to panto in Nottingham 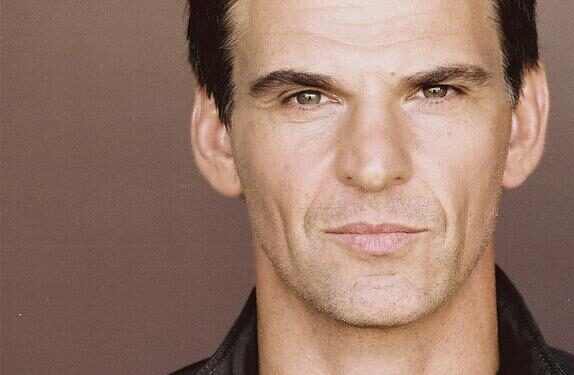 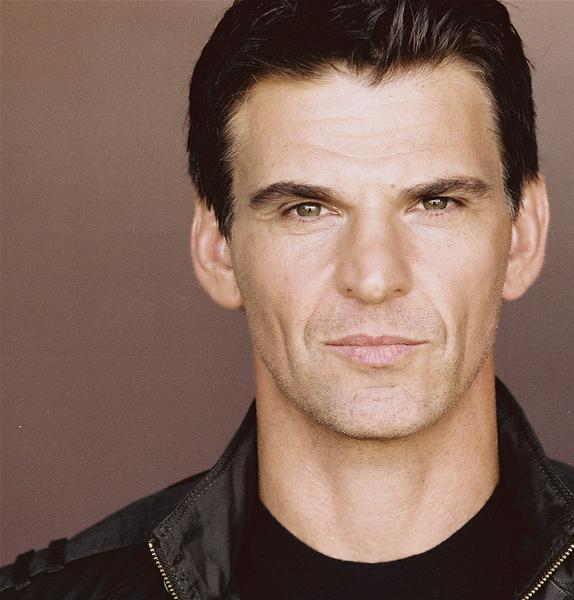 He’s played cool, confident consultant Adam Trueman in Casualty, complicated bistro owner Robert Preston in Coronation Street and on stage he was hunky Frank Farmer, the title character of the musical The Bodyguard. Now Tristan Gemmill is to play a totally different role in Nottingham.

He is hoping to be jeered in the Theatre Royal pantomime Robin Hood as he will portray the wicked Sheriff of Nottingham. He’s really excited about it.

“It’s much more fun to play the baddie because you can do things that you normally wouldn’t do as a nice, polite, well brought-up person. You can really go to town.

“Everyone knows how pantos work, everybody knows how they should behave even down to the youngest children. They boo and they hiss and you react to that.

“Panto’s a really great medium because you know exactly where you are. It’s not like a play when you don’t know how the audience is receiving it. Hopefully panto audiences are enjoying themselves and they know what they’re supposed to do.”

“It was just brilliant fun being with a great bunch of people and you just fed off the audience.”

This will be only the second pantomime that Tristan has performed in. He played Captain Hook in Peter Pan in Swansea in 2019 and was due to be in panto in Manchester last year. But the pandemic put paid to that.

When he took the role of Captain Hook, he admits he didn’t know what to expect.

“Obviously I’ve taken my kids to pantos and I went to pantos myself as a child. But I’d never experienced it from the other side.

“It was really hard work because you’re doing two shows a day. It was just brilliant fun being with a great bunch of people and you just fed off the audience.

“You work really hard but you get the rewards straightaway because hopefully, if you’re doing it right, the audience is having a good time.” 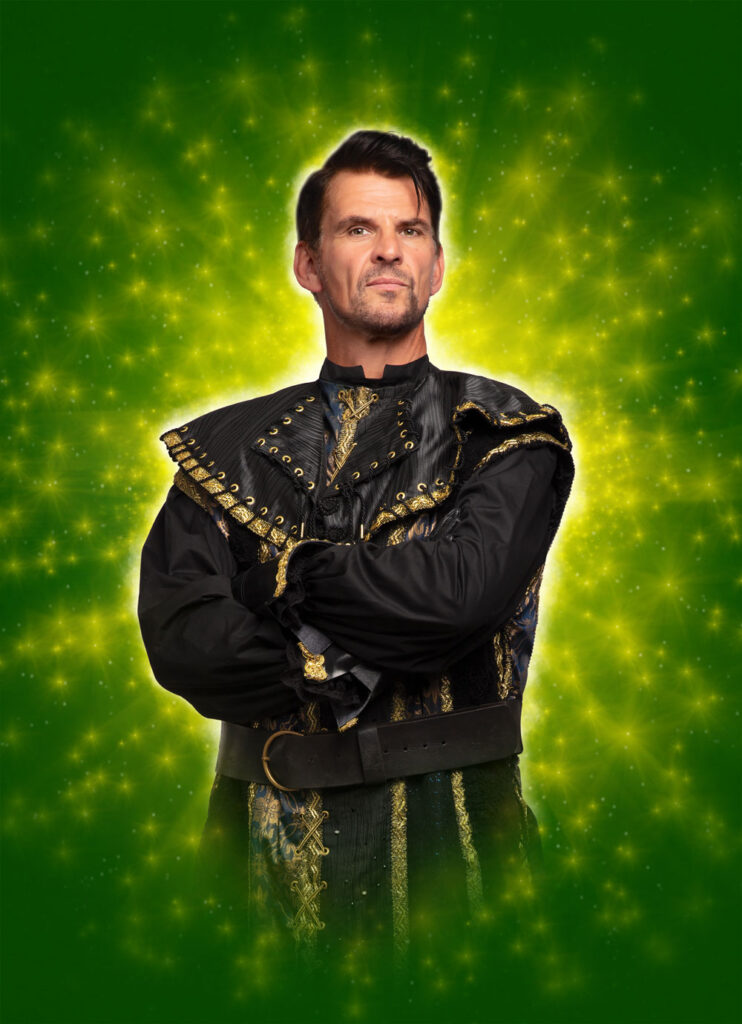 Lockdown meant Tristan did not have much work, so he made the most of the experience, home-schooling his son and two daughters. It came as a welcome break for him after he had appeared in Coronation Street for five years.

“I hated the pandemic part of it but I quite liked spending a lot of time with my kids. I’d missed out a little bit on that in the years previously. We were lucky – we didn’t get sick or anything. We had some really good family time so we ended up making a bit of a virtue out of an awkward situation.”

Now Wilfred, Mabel and Violet are looking forward to seeing their dad in pantomime.

“They’ll come up for probably a week or so before Christmas and maybe a second week after Christmas, so we won’t be apart for too long. There’ll be an element of adventure to it for them as well.

“Again we’re trying to make a virtue of things. Being absent from home is never great but we’re going to turn it into something fun.”

Tristan John Gemmill was born on 6th June 1965. He grew up in Kent and he got the acting bug at school when he was 13.

ITV were filming a mini-series, Winston Churchill: The Wilderness Years, with Robert Hardy as Churchill. When Churchill had a car accident, everyone was too nervous to ask him if that was the end of his career because he was approaching 70.

“These schoolkids come and interview him for a school magazine and they basically steamroller on and ask him the questions that adults dare not ask. It was just one scene and they wanted local schoolkids.

“They came to our school and did an open audition and I was lucky enough to do it. That was my first job and it absolutely that gave me the bug. That was a long time ago now. It’s a bug that’s lasted my whole life.”

A couple of years later Tristan’s parents and his family emigrated to Australia. He stayed there for ten years. He studied history and languages at Melbourne University, then decided to come back to England to see some old school friends. 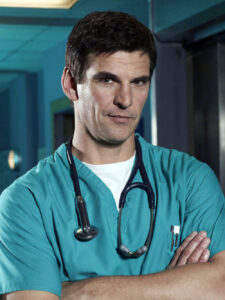 Tristan as Adam Trueman in Casualty

“I ended up getting a bit of acting work. That led to another job and then suddenly I’d been back here two or three years. It wasn’t that I chose to leave Australia for good. I came over here and just sort of followed which way the wind blew and it blew me along this path.

“I was very lucky to get work in the ‘90s. Then I met my wife” – he married actress Emily Hamilton in 2001 – “and put down firmer roots here. I’ve still got a lot of affection for Australia: I spent a good chunk of my life there and I try to get back whenever I can.”

On his website, Tristan says he likes things that take him out of his comfort zone and into areas he’s not done before. So can we look forward to seeing him in something completely different next year?

“As brilliant as Casualty and Coronation Street were for me, if you play the same character for four or five years, I think there’s always a danger of getting a bit comfortable in your shoes.

“I’m just open to new challenges. I would be happy to try something new if it turned up and that’s what I’m looking to do but I don’t have anything concrete to tell you. Beyond the panto I don’t know.

After leaving Corrie, Tristan went into the West End in the musical The Bodyguard. He describes himself as “not really a musical theatre person” but the bonus was that he didn’t have to sing or dance. 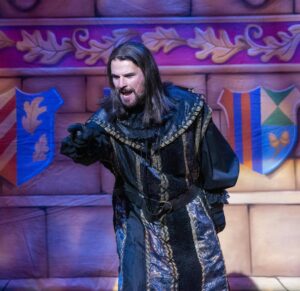 Tristan as the Sheriff of Nottingham (image: Whitefoot Photography)

“I was working with Beverley Knight for the first nine months and Alexandra Burke for the last three. You’ve got these amazingly talented women – half the time they’re singing songs directly to me so you’ve got the best seat in the house to watch these incredible talents do their thing. “That was a wonderful job and I just loved going to work every day. It was a terrific experience and one I really treasure.”

Tristan is now turning his hand to writing, something he took up during lockdown. He’s working on something for television, although he can’t say what it is.

“Acting is being with people all the time and bouncing off each other. You’re always in a group doing something. Writing is a much more solitary task. It’s quite a different headspace. That’s what I’m exploring at the moment. Not that I’m going to stop acting. I’m just seeing how far that goes.”

Before then Tristan will return to the Theatre Royal for the first time in 28 years. The last time he was in Nottingham was alongside Dennis Waterman in the Keith Waterhouse comedy Jeffrey Bernard Is Unwell.

“I think it was the day of the FA Cup final and I remember I had to go on and off stage quite a lot. I kept scribbling the scores down on props and carrying them out. I watched Dennis’ eyebrows go up or down as he heard the score.

“It’ll be nice to get back to the city. I hear great things about it, so I’m really looking forward to it.”

Tristan Gemmill really does come across as a “nice, polite, well brought-up person” – too nice, it would seem, to play the unjust tyrant who charges the people of Nottinghamshire unaffordable taxes. But he’s consistently shown that he’s a great actor, so it won’t be too taxing for him to lead Robin’s men a merry dance at the Theatre Royal.