Her books have sold 16 million copies worldwide, been translated into 40 languages and recently her work topped the fiction, non-fiction and children’s book charts all in the same week. But Val McDermid isn’t sitting back basking in her success: she’s always looking for new challenges.

The 64-year-old crime writer is working on her next thriller, she’s been commissioned to write a play and she’s developing a graphic novel.

Apart from that, she’ll be speaking next month at Derby Book Festival and she’ll also be “murdering” songs – not my description – with her band Fun Lovin’ Crime Writers.

She will no doubt be promoting her current paperback, How The Dead Speak, the 11th book featuring clinical psychologist Tony Hill and police detective Carol Jordan.

Val will probably talk too about her next release, the sixth involving cold-case detective Karen Pirie, which is due to be published in August.

ITV is working on a dramatization of the Karen Pirie novels although there is no date yet for transmission.

It will do well to match the popularity of one of Val’s earlier TV series, Wire In The Blood, which was broadcast from 2002 until 2009. It starred Robson Greene as Hill and Hermione Norris as Jordan.

Val thinks ITV did a really good job with the series: “I thought Robson Greene was a very good Tony Hill. I thought the scripts were great, as were the production values.

“It’s still running on TV now, people still watch it. People Tweet me: ‘I’ve just discovered Wire In The Blood, I think it’s amazing.’ If you look at it now you see a lot of things we pioneered that have been picked up subsequently by other crime series.”

“I had a series called Traces at the end of last year on the Alibi channel. That was the most successful drama Alibi have ever shown.”

Some of Val’s readers might be wondering why more of her work hasn’t transferred to the small screen. She says it’s the luck of the draw.

“All my books have been optioned pretty much at one time or another. Some have got made, others haven’t.

“I had a series called Traces at the end of last year on the Alibi channel. I created it, did the storyline and Amelia Bullmore (actor who appeared in the crime series Scott & Bailey) wrote the scripts. That was the most successful drama Alibi have ever shown.”

Val says she likes to be involved when her work is turned into television but she realises she can’t exert control over how it appears.

“It’s a completely different medium and they have different storytelling values and different ways of telling stories. 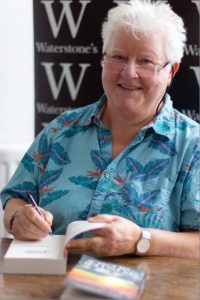 “What you can do is work with people that you trust. I’ve said ‘no’ plenty of times because I didn’t like the people or I didn’t trust them or I thought they didn’t get what I was trying to do.”

She adds: “Ultimately what you want is good television. It doesn’t have to slavishly follow the books, it has to have the same sort of ambience as the book. What you want is for someone to make a good television series that brings more readers to your books because ultimately it’s about getting people to engage with the books which of course are much more dense, much more complex than the television series because you can’t compress 400 pages even into six hours of television and not leave stuff out.”

Val is renowned for her gritty, gory novels and some commentators always refer to her graphic descriptions of violence and torture. But when I bring up this part of her work she lets out a deep sigh and maintains that it is merely one strand.

“The Tony Hill and Carol Jordan novels deal very directly with the nature of violence, what it is and the effect it has on people. Every week in this country three women are murdered by their partners. There’s serious sexual violence around us all the time and ignoring it is not going to make it go away. I think we have to deal with the world as it is, not as we would like it to be.”

Val McDermid was born on 4 June 1955 in Kirkcaldy, Fife to a working-class family. She was the first student to be admitted to St Hilda’s College, Oxford from a Scottish state school.

After graduating in English she became a journalist, working for 14 years on national newspapers in Glasgow and Manchester.

She started writing her first novel, Report For Murder, in 1984. It was published three years later. It wasn’t until 1991 that she finally gave up her day job.

She has penned two books of short stories, three non-fiction works including a picture book for children called My Granny Is A Pirate and a couple of radio plays.

So what drives her on to keep coming up with new projects?

“I like to take on new challenges. That’s how I keep interested in what I’m doing. I couldn’t just write one set of characters. I don’t understand how people can keep one single series going all through their career and never write anything else.

“I have a very low boredom threshold I’m afraid. I can’t write two books back to back with the same characters. So I try doing different things and when the opportunity arises I’ll grab it with both hands.”

Just like Agatha Christie, Val has been dubbed the queen of crime, something she’s not entirely comfortable with.

“It’s very flattering but it’s also quite embarrassing really, particularly since I’m a republican. One journalist called me the shop steward of crime which I find much more satisfying in many ways.”

Away from her keyboard Val divides her time between south Manchester and Edinburgh where she lives with her partner and son. She is a staunch football fan and sponsors the shirts of Raith Rovers, “the mighty Raith” as she calls them, who this season are aiming for promotion to the Scottish Championship.

And she sings with the Fun Lovin’ Crime Writers who do “cover versions of songs about crime and murder, so everything from the Clash to Johnny Cash and everything in between. Last year we did Glastonbury, this year Derby!”

But she relishes the first three or four months of the year when she can concentrate on writing. She says she simply wants to keep on doing interesting work.

“The ambition is always to get better, to become a better writer, for each book to be better than the one before.”

She reckons that a play she has been commissioned to write by the Royal Lyceum Theatre in Edinburgh will stretch her talents to the limit. She has also just seen the first draft of a graphic novel that’s being developed from a series of radio plays she did called Resistance.

“Here I am in my mid 60s and I’m still learning new stuff and still being excited by it.”

“It couldn’t be more timely really because it’s about the spread of a viral epidemic that more or less wipes out the population of the planet.

“I know the nuts and bolts of how to write a novel but with other things I’m very much the novice, the apprentice. And that’s really interesting, to be working with people who are much more expert in those fields than I am.

“I feel every time I do something like that I learn so much that I can take forward into the next project. I find that really exciting. Here I am in my mid 60s and I’m still learning new stuff and still being excited by it. And that’s probably the key for all of us: we should try to stay excited and discover new things.”

A mantra that everyone attending Derby Book Festival is probably going to adopt.