CHASING A DREAM: Stats attack – the players who topped the league’s charts 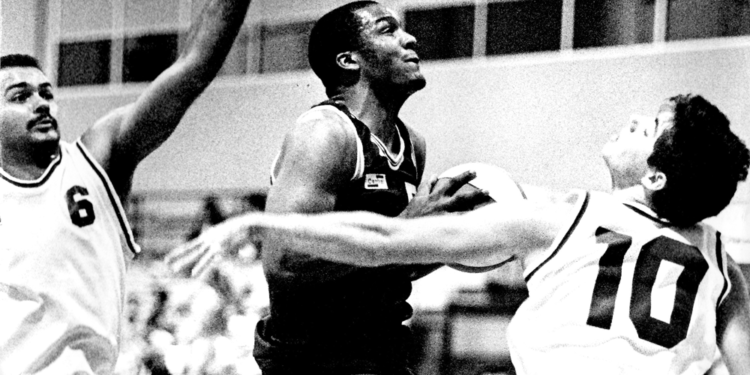 For 16 years Derby had a club in the top division of the basketball league in Britain. They struggled in the first three years and the last two years of the franchise, resulting in an overall winning percentage of 37.47%.

Basketball is a game of statistics, so here’s Derby’s record in all competitions since they were promoted to the top division in 1986 until their demise in 2002.

Thanks to Roger Yapp, statistics are available for the two years when John Eld Derby Turbos competed in Division Two. They show how essential Ron Whitehead and Clarence Wiggins were to the team in 1984-85. Whitehead clocked up 792 points at an average of 36 a game. He weighed in with 7.9 rebounds a game too. Wiggins recorded a very respectable 19 points and nine rebounds every time he took to the court.

In 1985-86 Wiggins maintained his value to the team with 19.77 points and 8.59 rebounds per game. The other American, Tim Reiser, averaged 35.45 points and 4.72 assists a game while from three-point range he shot a staggering, club record 56.86%, although remember that was in Division Two.

While 1987-88 proved another difficult year, it marked the emergence of Tim Lascelles as a vital component of the team. The number of points he contributed rose to 16.03 per game while his success from three-point range jumped to 31.55%.

Carl Chrabascz proved he was as effective as he was popular with the supporters, his 647 points coming at an average of 23.96 a game. He also weighed in with 7.59 rebounds a game and converted 86.4% of his free throws.

The decision to release Ace Tanner appeared justified: the club and the fans expected more from him than 16.77 points and 5.69 rebounds a game.

Lascelles became even more invaluable in 1988-89, taking over the mantle of top scorer because of poor recruiting, particularly of Americans. Lascelles again improved his stats, recording 19.95 points a game, while his three-point success rate was astonishing at 53.96%.

Rich Kunselman contributed 14.36 points and 8.28 rebounds a game in his second spell with the club before he was injured while Mike Henderson who arrived in December had a good second half of the season, weighing in with 21.46 points and 10 rebounds a game.

He was eclipsed in the scoring chart by Ernest Lee who hit 20.96 points per game (average 58.64%) and also dished off 4.19 assists every time he took to the floor.

Kenny Scott also proved his worth with 19.66 points and 9.41 rebounds a game.

The following season Lee relinquished the role of point guard and reaped the benefit. He was the league’s top scorer, demolishing opponents’ defences with 32.83 points a game.

Player-coach Nick Nurse also had hot hands, recording 20.13 points and 5.67 assists a game. He also made 43.68% of his three-point attempts. It was a season when long-range shooting was an integral part of the Rams’ game, with seven players connecting from beyond the arc and Derby hitting no fewer than 215 threes at an average of just under nine per game.

Terry Manghum wasn’t to be outdone and showed what an astute signing he was with 9.5 points, 7.5 rebounds and 3.17 assists each time he took to the floor.

When Manghum took over as player-coach in 1991-92 his output improved to 12.93 points and 3.97 assists per game, although his rebounding dropped slightly, to 6.66 a game. That was because the Bucks had a bigger team, with Terrance Hill pulling down 12 boards a game to go with his 350 points in 17 games at an average of 20.59.

Lascelles was again the team’s top points scorer, with a total of 400 at an average of 13.33 a game.

Although 1992-93 was a bit of a disappointment, recruitment seemed to be a lot better. Lester Hood had a strong season with 21.25 points and 7.19 rebounds a game while Carl Mitchell had 18.71 points and 11.31 boards each time he took to the floor.

Player of the year Kurt Samuels dropped in 16.28 points an outing while dishing off 3.12 assists.

Wembley beckoned in 1993-94, with the Bucks’ two Americans again showing well in the stats. Charlie Mandt was eighth on the list of top scorers, knocking down a total of 754 points in 35 games at an average of 21.54 per game.

In the floor shooting category, Jason Siemon was sixth, making 230 field goals from 385 attempts for an average of 59.74%. Siemon was second only to Sunderland’s Russ Saunders for steals, in 32 games recording 101 at an average of 3.16 per game.

Andy Gardiner was 10th on the list for total rebounds. In 35 games he pulled down 298 boards at an average of 8.51 per game.

An indication of the team’s form that season was that no Derby player finished in the list of top rebounders or shot blockers.

Reece Horton crept into the floor shooting percentage category in 19th, making 74 of his 137 attempts at an average of 54.01%.

Gonda played only 11 games in 1996-97 before taking a job in the States. But he managed to secure second place in the three-point shooting stakes, his success rate dropping only slightly to 49.06%.

Lorenzo Pearson crept into 20th place for offensive rebounds with 50 in 21 games at an average of 2.38 a game. He was fifth on the list of blocked shots with 25, an average of 1.19 per game. McGlothin came seventh with 30 blocks in 32 outings at an average of 0.94 a game. 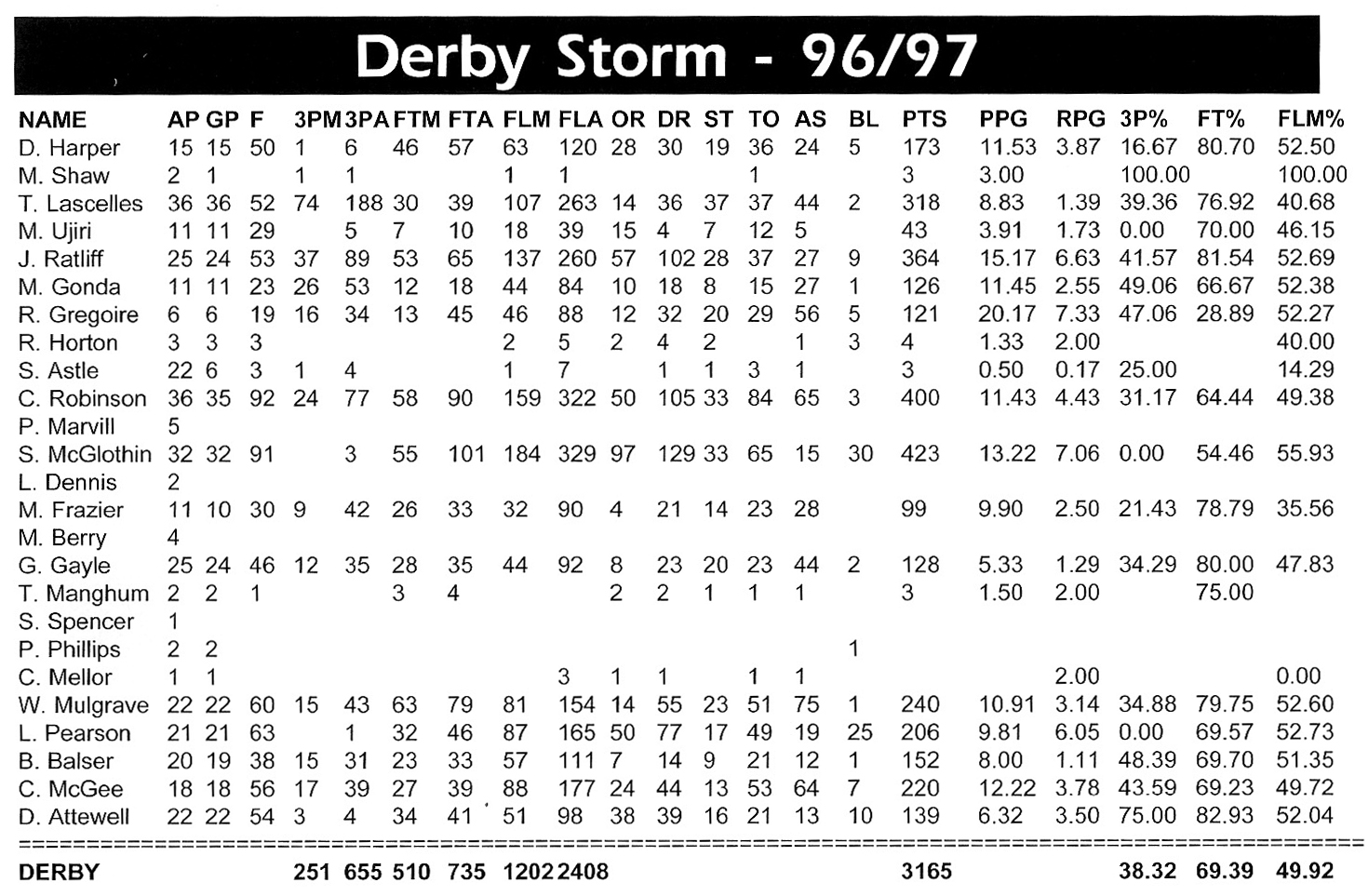 Although the Storm underachieved as a team in 1997-98, players featured prominently in the individual statistical categories.

Brendan Graves led the league in blocked shots, his 61 in 22 outings coming at an average of 2.77 per game. David Attewell was eighth in the league for blocks, swatting 33 shots in 34 games for an average of 0.97. 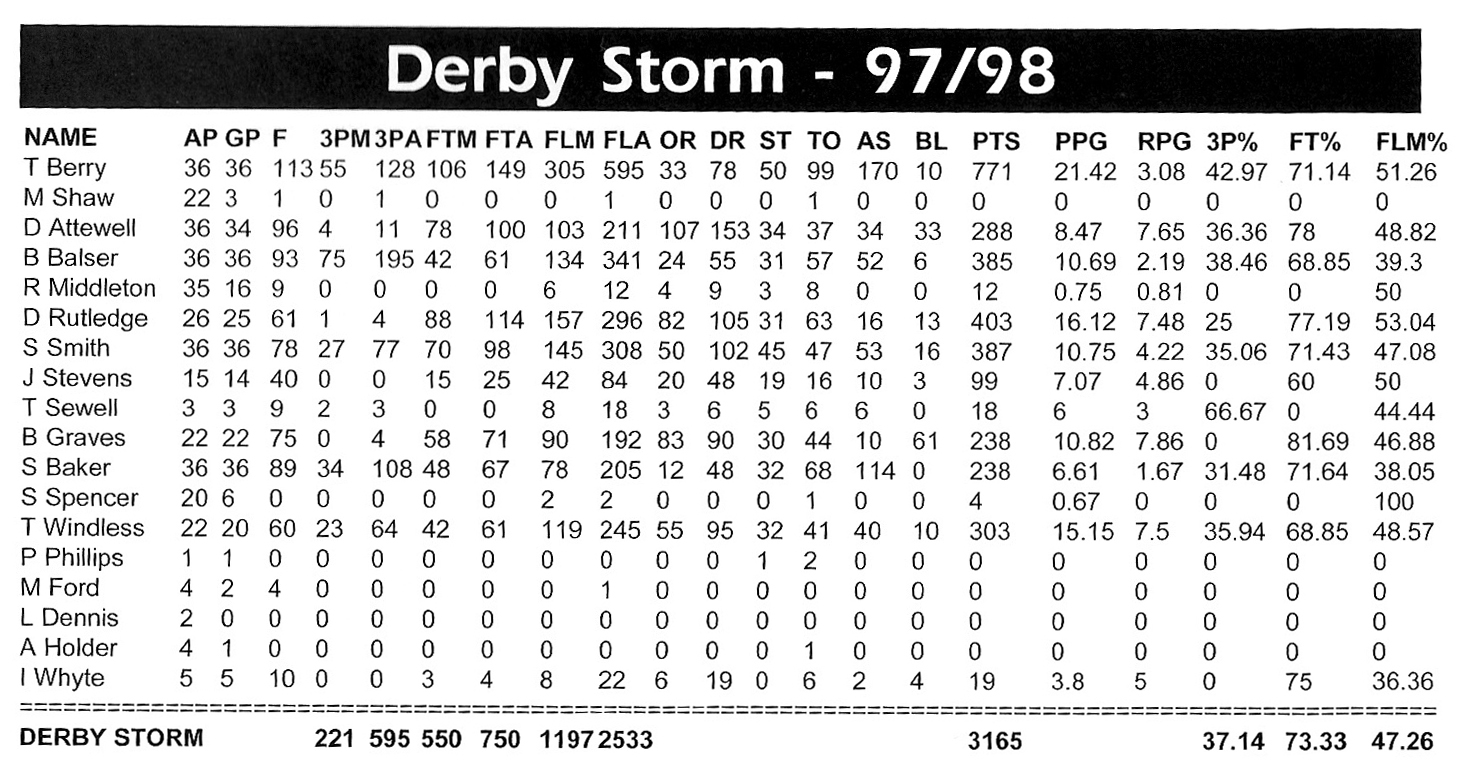 For the third time in their history, the Storm had a league leader in 1998-99 – and he showed up in no fewer than four categories. Rico Alderson pulled down more rebounds than anyone else that season, his 296 in 25 games coming at an average of 11.84 a game.

Maurice Robinson trailed behind Alderson in the rebounding stakes, although his 246 in 29 games at an average of 8.48 a game put him in 13th place in the league. The Arkansas forward was 19th for floor shooting, knocking down 169 of 329 attempts at an average of 51.37%.

Another Storm player who made the steals list was John Tresvant. His 80 steals in 36 games at an average of 2.22 a game put him as high as sixth on the league list.

The expensively assembled team of 1999-2000 was accused of having individuals rather than team players, so it’s no surprise to see several Storm names in the leading averages for that season. But none made the list for floor shooting percentage nor free-throw shooting.

Cypheus Bunton was top shot blocker in the league with 118, an average of 3.37 a game. 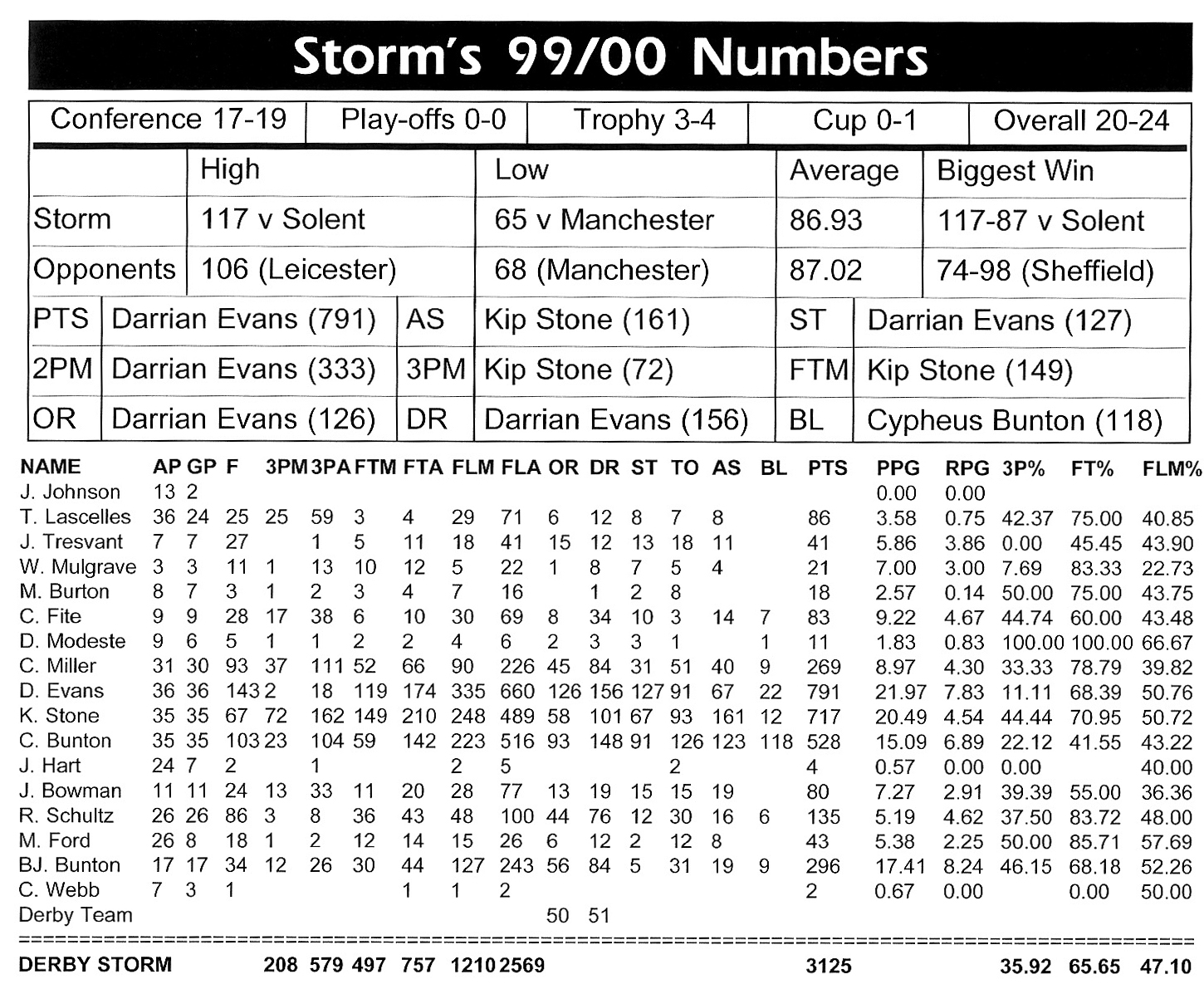 After a year away, Joel Burns returned and had another good season from three-point range. This time he moved up a place to second in the league, hitting 79 of 175 long-range efforts (45.14%) although his average was slightly down on his figure for 1998-99.

Carl Miller came 18th on the steals list with 63, an average of 1.75 a game. Michael New made only 13 appearances before leaving for France, pulling down 67 defensive rebounds at an average of 5.15 a game to secure 17th spot in the league. 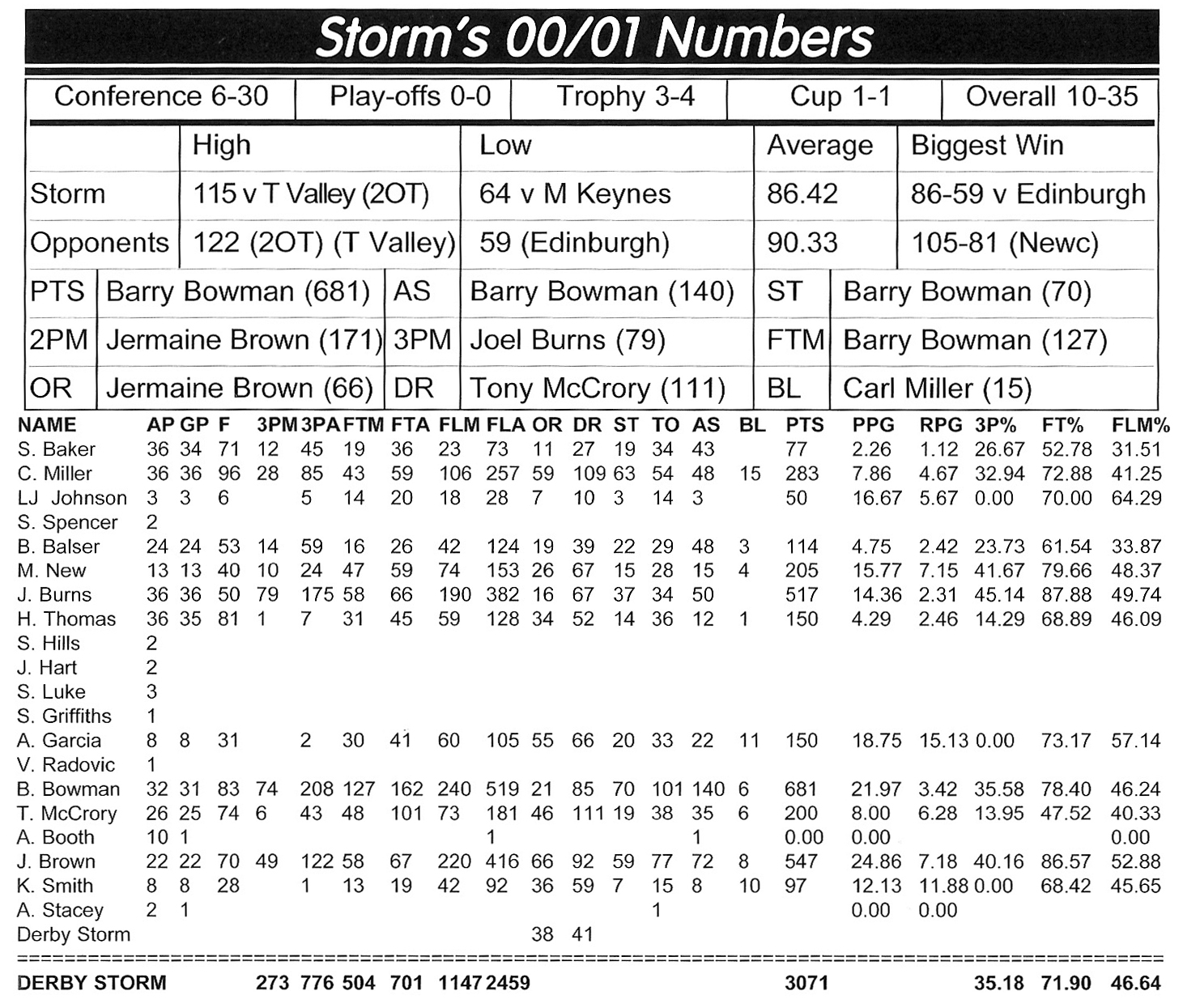 Derby’s final season in the top division, 2001-02, was the worst in the club’s history, so understandably few players made it onto the league’s list of top performers.

Durrell Robinson came seventh in the three-point shooting category, knocking down 46 of 115 attempts from beyond the arc (40%).

So who can claim to be the top Derby players of all time, taking into account their statistics? For points scoring, it has to be Ernest Lee. He hit a staggering 755 points playing only 23 games in 1990-91 at an average of 32.83 a game.

The top long-range shooter is undoubtedly Mike Gonda who in 1995-96 made 58 shots from beyond the arc at an average of 51.79%. However, Tim Lascelles is the most consistent from distance, regularly knocking down more than one in three of his attempts. He is undoubtedly the player with the most appearances for Derby, pulling on the uniform 428 times in 15 years.

As for the most lethal free-throw shooter, there was a great battle in 1998-99, with Joel Burns finishing with a success rate of 88.36%, just above Nate Reinking who had a very credible 86.43%.