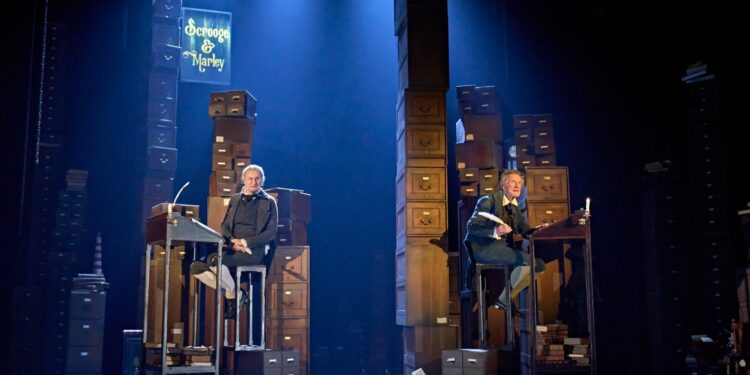 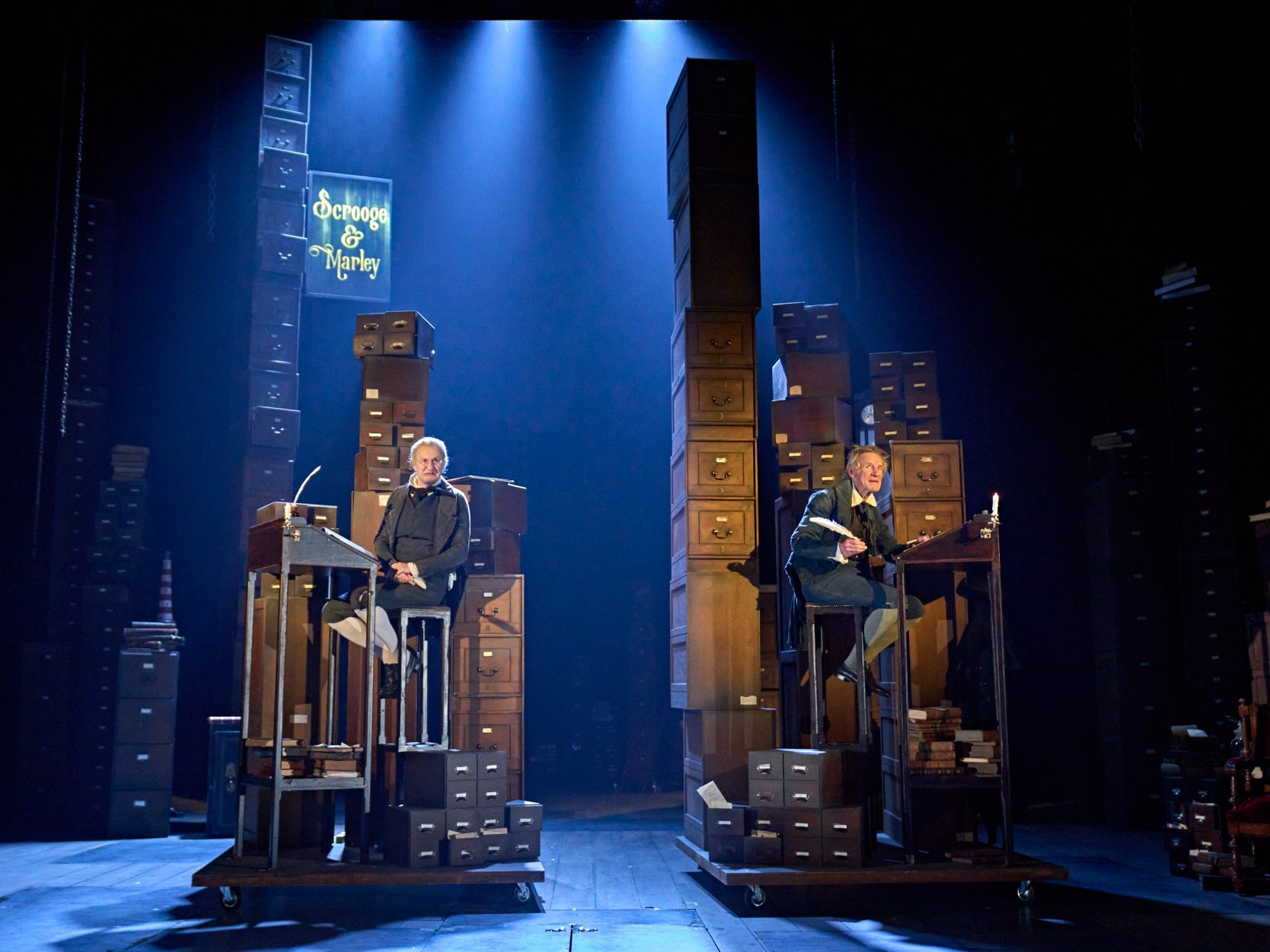 Is it too early to be talking about Christmas? Some people will say yes. And do we need yet another version of A Christmas Carol? Probably not, many theatregoers may believe.

There have been countless adaptations of Charles Dickens’s masterpiece including one-person shows and even one for a cast of “eight actors and a lightbulb”. But Mark Gatiss gives us his own interpretation that demonstrates there are still new ways of looking at Dickens’s 1843 novella.

In the programme for A Christmas Carol: A Ghost Story, Gatiss admits that he has been obsessed with the story since the age of four when he saw Albert Finney in the film. It left a “profound impression” on him and the optimism, sentiment, pain and melancholy “magically combined into the perfect Christmas story”.

Gatiss believes that A Christmas Carol is largely overlooked as a ghost story, so this is his attempt to address that.

He and director Adam Penford use every means at their disposal—sound effects that make you jump out of your seat, evocative lighting and apparitions emerging from all parts of the auditorium—to maintain a spooky atmosphere. 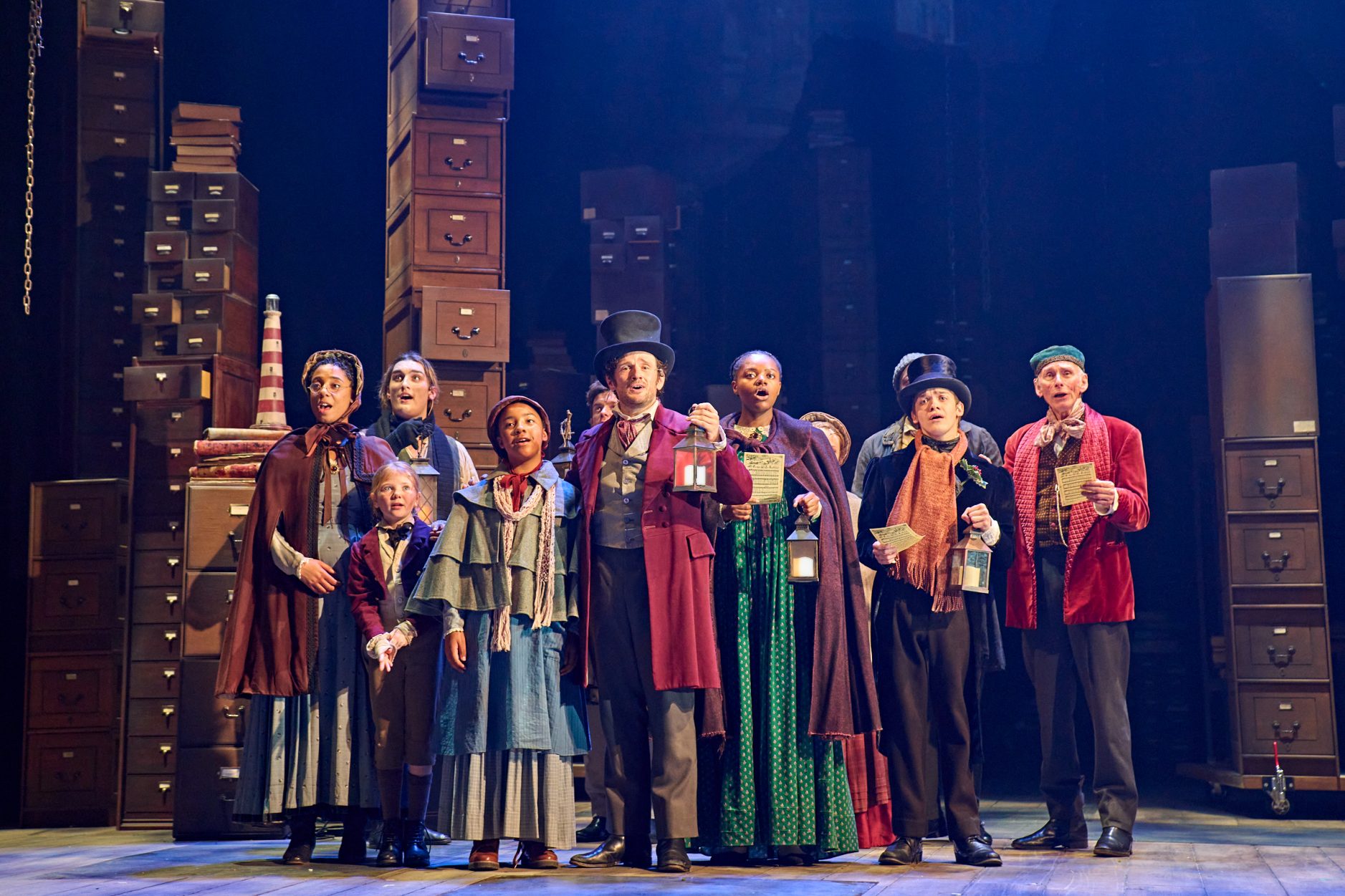 The cast of A Christmas Carol: A Ghost Story

The first thing you notice about the production is Paul Wills’s set, huge columns of filing cabinets and drawers making up the office of Marley and Scrooge, greedy misers whose selfishness knows no limits.

Those cabinets spin round to reveal the two men at their raised desks. Gatiss himself plays Marley who dies on stage before returning as a ghost in chains. He warns his business partner that he must repent or face wandering the earth constricted by even heavier chains.

Gatiss also plays other characters including the Ghost of Christmas Yet to Come and clearly revels in the chance to bring his ideas to the stage.

It also becomes apparent that Nicholas Farrell is ideal for the role of Scrooge. Gatiss’s script depicts Scrooge as an even more hateful character than usual—he even tries to steal money gifted to a blind man. Farrell handles the transformation from odious villain to redeemed philanthropist with sufficient control to ensure the change is totally credible.

A Christmas Carol: A Ghost Story is an ensemble piece with 15 actors playing 50 characters in more than 30 scenes. All perform creditably although Christopher Godwin pulls everything together as the narrator and Edward Harrison earns compassion for his portrayal of Bob Cratchit. 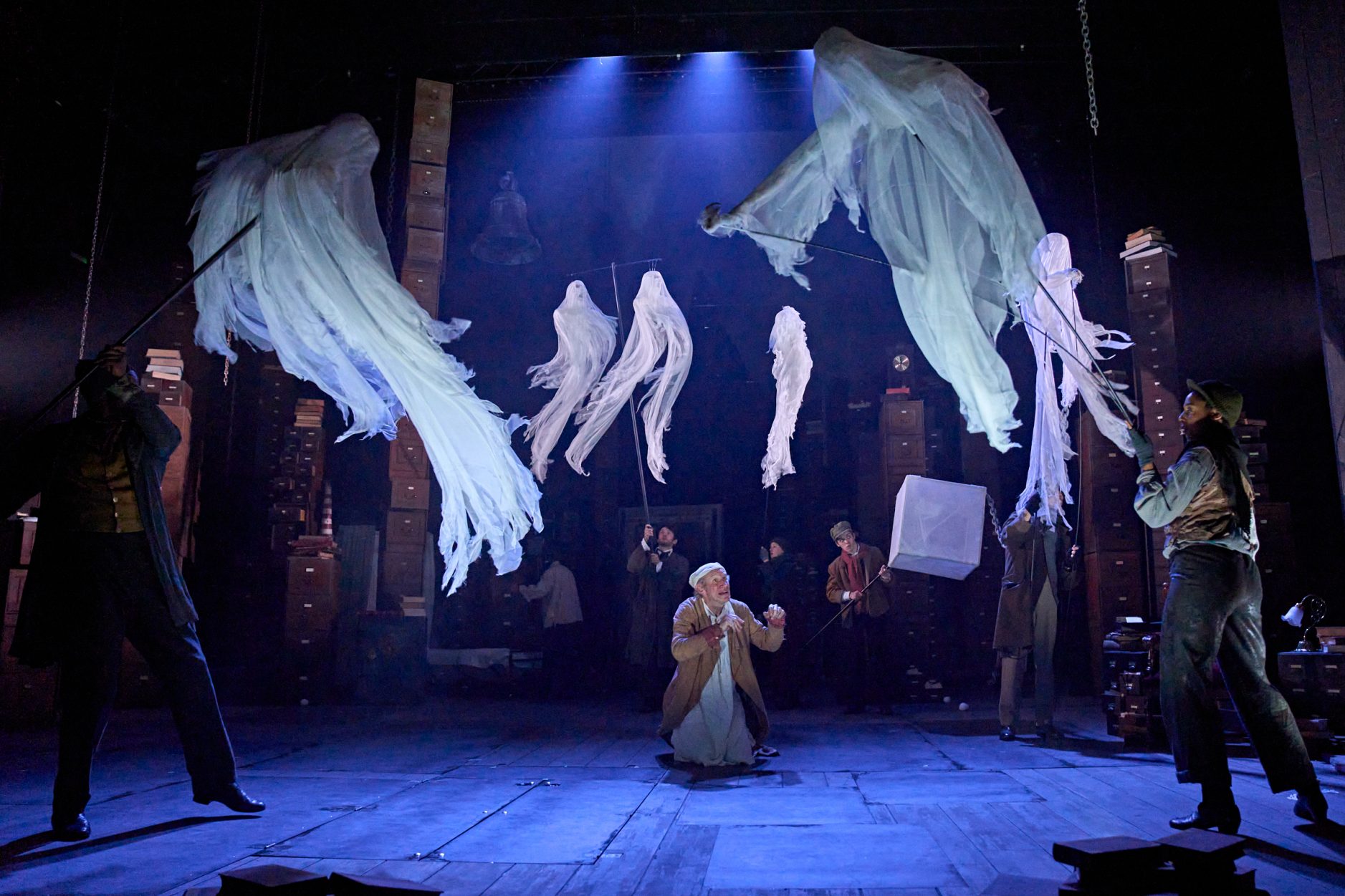 Nicholas Farrell (Ebenezer Scrooge) and the cast of A Christmas Carol: A Ghost Story

Six actors including four youngsters make their stage debuts and do not look out of place.

This is the second time that Gatiss and Penford have collaborated on a production. Nottingham Playhouse artistic director Penford persuaded Gatiss to take the lead role in Alan Bennett’s The Madness of George III in 2018. That became the highest-selling drama in the theatre’s history. It seems likely that A Christmas Carol will have similar success.

So why is A Christmas Carol: A Ghost Story appearing so early? After its run in Nottingham, it moves to spend Christmas at London’s Alexandra Palace Theatre. The Playhouse programmed it so that Nottingham audiences could also experience what is in fact a slick, clever, uplifting production which has a nod towards Halloween.

Some people may think it’s premature for the cast to be delivering a rousing version of “O Come All Ye Faithful” at the end. But it’s unlikely that after seeing A Christmas Carol: A Ghost Story anyone will leave the theatre uttering “bah! Humbug!”

Beauty and the Beast