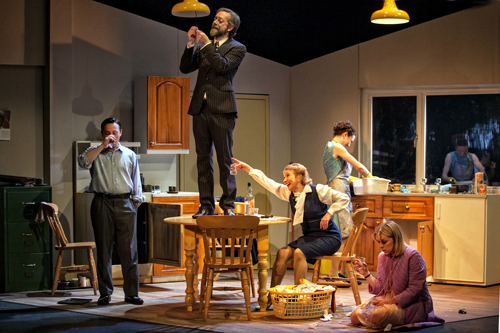 Few things can be as surreal as sitting in a theatre with alternate rows of seats empty and big gaps between couples who wear a mask for more than two hours. But sitting in a socially distanced theatre on a muggy June evening watching a play about Christmas takes surrealism to a new level.

London Classic Theatre’s tour of Alan Ayckbourn’s 49-year-old work Absurd Person Singular had to be suspended in 2020 because of Covid. Its short stop-off at Derby Theatre marks the start of a four-month trek around England and Wales that belatedly celebrates the company’s 20th year on the road.

The cast all started the 2020 tour and are back to reprise their roles. Most have worked for London Classic Theatre before, so they know what company founder and artistic director Michael Cabot wants from a production.

Absurd Person Singular, like many of Ayckbourn’s plays, features three couples from different social classes. They meet on successive Christmas Eves, their lives changing inexorably in the intervening years as they respond to their evolving circumstances. 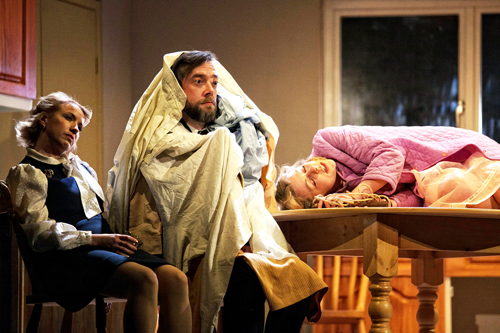 Cabot has chosen an intriguing cast: if you know the play you might have stereotypical ideas about the characters but these are almost non-existent in these actors.

For instance, banker Ronald Brewster-Wright can be portrayed almost like Captain Mainwaring from Dad’s Army, a small man who uses his position in an autocratic way. But Graham O’Mara, a tall yet in some ways gentle figure, gives another dimension to the character who is hopeless at anything practical.

Rosanna Miles exuberantly portrays his wife Marion, snobbish and overbearing in the first act, less effervescent in the third as alcohol takes its toll on her.

The most striking change is in Eva Jackson, played skilfully and sensitively by Helen Keeley. She transforms from a downtrodden wife devastated by her husband’s infidelity and silently determined to end it all into a confident woman who bounces back strongly from her mental health problems.

John Dorney, slightly unkempt and hirsute, does not on the face of it appear to be a lecherous architect but has the swagger of a chauvinist who wants to have his cake and eat it. 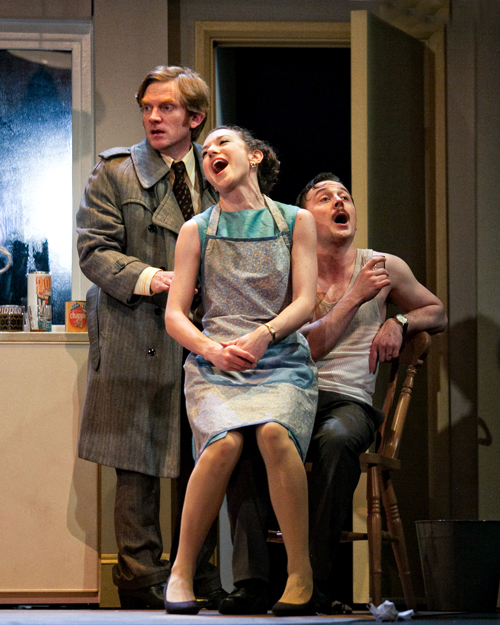 Paul Sandys nails the character of Sidney Hopcroft, the social-climbing general store owner with big ideas. There are times when he is agonisingly awful as he puts his wife down and wants things done in his own finicky way. No wonder the two other couples try to hide from him in the last act.

Felicity Houlbrooke catches the eye as Jane Hopcroft, the obsessive cleaner who goes to ridiculous lengths not to let her husband down at the start and becomes so self-confident that she does not care what anyone thinks about her.

This is the first play I have seen since theatres reopened which has an interval. This is totally necessary as Simon Scullion’s set switches from the Hopcrofts’ functional yet basic kitchen in the first act into a more elaborate Jacksons’ kitchen in the second.

The play comes to life in the second act when slapstick elements of the production are handled cleverly and humorously.

Overall, Cabot and his cast find enough new in Absurd Person Singular without taking out the darker constituents of Ayckbourn’s script to make the play worth a look – even if it seems odd hearing Christmas carols in June.