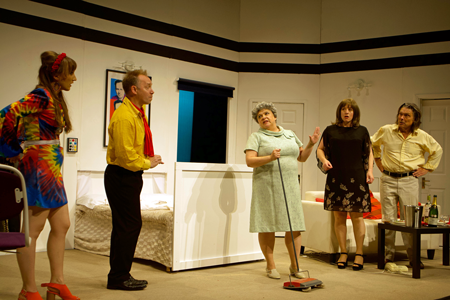 Chesterfield’s Pomegranate Theatre is staging a summer play season and the boss of one of the companies involved says because of the pandemic the idea is to give everyone a good laugh.

John Goodrum from Rumpus Theatre Company, which is looking after the season with Tabs Productions, could have added that they had chosen plays which would appeal to the predominantly older audience who see their work.

The opener is The Mating Game, Robin Hawdon’s first big commercial success which had a two-year run in the West End in 1972 and became a regular on the touring circuit for the next 20 years.

Is it dated? Yes. Would its themes of randy blokes celebrating their conquests and women throwing themselves at powerful men be avoided by some theatre companies nowadays? Again, yes. But was it performed well and did the audience enjoy it? Undoubtedly. 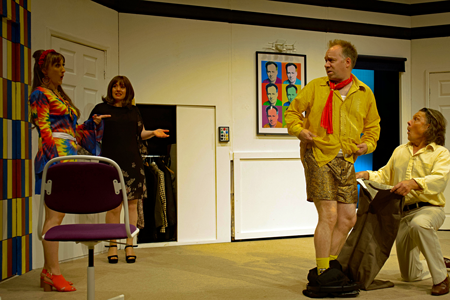 Rumpus last performed The Mating Game in 2004. Some people might have thought in those days that the play was a bit creaky. The fact that Goodrum and David Martin reprise their roles from 17 years ago, with women queuing up to swoon over their mature characters, gives the show a touch of surrealism without implausibility.

The Mating Game features successful chat show host Draycott Harris who lives in a swanky, gadget-filled penthouse flat in Mayfair. On television he is the “biggest thing since Basil Brush”. But he fails to live up to his reputation as a notorious stud.

Martin gives a solid performance as Draycott, giving credibility to the role of TV star while also gradually letting loose the character’s vulnerability.

Goodrum revels in the part of Draycott’s elder brother James, unexpectedly back home after three years away and determined to aid his sibling’s sexual exploits.

The pair of them excel in a scene where they progressively become paralytic on Australian home-made schnapps, slurring their speech and stumbling across the stage.

There are also pleasant performances from Rumpus newcomer Chloe Thorpe as Honey Tooks, Draycott’s new PR girl, the pursued who becomes the pursuer; and Sarah Wynne Kordas, loyal, subservient secretary Julia who puts up with her boss’s amorous exploits because her feelings for him run far deeper than she is prepared to admit.

Susan Earnshaw as Draycott’s housekeeper Mrs Finney lights up the stage every time she appears, her precise comic timing responsible for some of the evening’s funniest moments.

Goodrum and his wife Karen Henson share directorial duties and come up with a slick production which has an energetic pace.

The set plays a huge part, with a bed disappearing into a wall at the touch of a button, a dressing table revolving to become a desk with a typewriter and a cocktail cabinet going into hiding when it is not needed.

Goodrum designed the set for the 2004 staging, with many of the elements built by Clive Goodland. It has been brought out of storage and put together this time by scenic artist Pete Siddon and stage manager Conal Walsh.

As farces go, The Mating Game is not high on the “best of” lists. But theatre companies can still get plenty of humour from it, as Rumpus capably demonstrates.