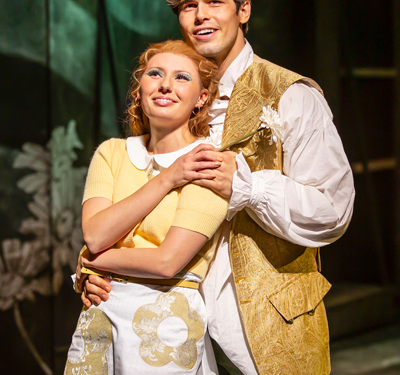 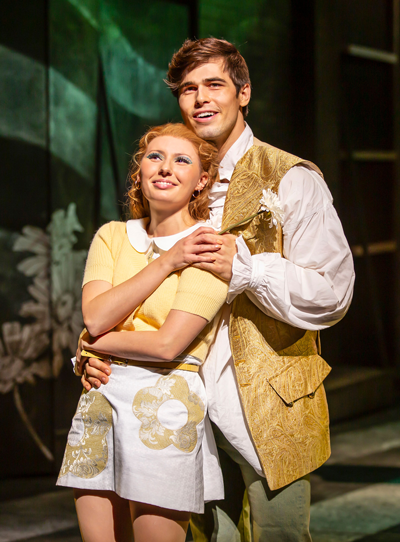 Who do you think of when the name Tom Jones is mentioned: the eponymous character of Henry Fielding’s 18th century novel “The History of Tom Jones, A Foundling” or the Welsh warbler who was knighted for services to music in 2006?

Joe DiPietro’s new musical What’s New Pussycat? combines the two. He starts with the novel which follows the hero’s adventures as he leaves the countryside to make his fortune in London, whereas in What’s New Pussycat? Tom goes from Somerset and lands in the capital in the swinging ‘60s. He leaves behind his sweetheart Mary Western, a clothing designer who produces “miniature skirts”.

The juxtaposition of formal 18th century wear and 1960s fashions might appear strange to some people – but in the main the concept works.

DiPietro has taken 21 of Jones’ songs and stitched them together in a jukebox musical which has a reasonable plot along with hights and lows of emotion before everyone lives happily ever after.

Admittedly parts of What’s New Pussycat? are contrived. The best example is when Lady Bellaston decides Tom needs a makeover if he is to become a successful rock ‘n’ roll singer, encouraging him to strip to his Y-fronts accompanied by “Leave Your Hat On”.

Another trick involves Tom being arrested and thrown into jail so that he can sing “Green, Green Grass of Home”, bringing out the full depth of Claude Putman Jr’s lyrics.

However, these machinations can be forgiven because What’s New Pussycat? belts along at a cracking pace, gives audiences the chance to sing along and leaves them with a warm, happy feeling at the end.

The whole cast throw themselves wholeheartedly into their roles, their enthusiasm and delight being evident all the way through. 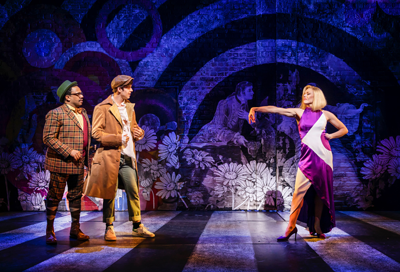 Dominic Andersen gives a stirring performance as Tom, his appeal to the women in the audience matched by his vocal ability on a wide range of songs.

Bronté Barbé is just as impressive as Mary Western, her powerful yet controlled vocals being shown off to maximum effect on “Without Love” and “Sometimes We Cry”.

Lemuel Knights almost steals the show as a stary-eyed prisoner who sings “Delilah”, menacingly yet humorously ordering a member of the audience to join in with the singing.

Luke Sheppard, who has directed productions of Jersey Boys, Mamma Mia and & Juliet, clearly knows how to win over an audience, directing with style and vivacity.

And with Arlene Phillips as the choreographer, there is little chance of a show falling flat.

With dazzling costumes courtesy of Janet Bird and a nine-piece band ably led by Josh Sood belting out the numbers, What’s New Pussycat? will have most people experiencing “Chills and Fever”, especially when they join in with “Sex Bomb” at the end.

What’s New Pussycat? has a five-week run at the REP. Are audiences going home satisfied after seeing it? It’s not unusual . . .

Paul Jones: on the road again with ...